WWE Legends is a book with a serious identity crisis. Is it a tell-all? A kayfabe book? Or something in between? It’s not quite Pro Wrestling Illustrated and it isn’t The Wrestling Observer Newsletter. 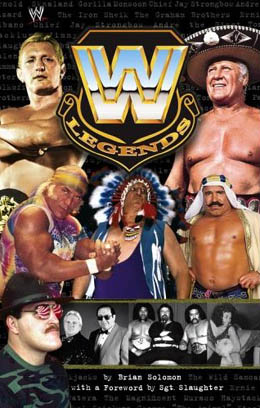 This lack of true direction makes for a maddening collection of biographies on some of the richest, most colourful grapplers in wrestling history.

“The purpose of this book is to celebrate the careers of forty of the most influential and important figures from WWE’s early ‘territorial’ period, ranging roughly from 1953 through 1983,” explains regular WWE contributor Brian Solomon in the Introduction.

Written respectably by Solomon, WWE Legends lacks that magic that marks a truly spectacular piece of prose. The “one more call” concept in the writing game is that the next call may yield even more goodies for your story. Again and again, Solomon finds himself relying on the regular crew of voices, like Sgt. Slaughter (who also penned the foreword), Vincent K. McMahon, and Freddie Blassie’s autobiography.Having had a lot of experience myself dealing with wrestling legends, both with SLAM! Wrestling, and with the two books in The Pro Wrestling Hall of Fame series (with more to come), I can attest to a few things — for the most part, old wrestlers love to tell their stories; there is a market for real history and fans are tired of revisionist tales; and the folks under WWE deals like Slaughter and Tony Garea are hard to reach for an outsider.

While it is great to hear the stories first-hand from the likes of Killer Kowalski, Pat Patterson, Pedro Morales, and Ernie Ladd, Solomon didn’t interview more recent names like Mr. Fuji, Jimmy Snuka or Nikolai Volkoff. No doubt there were handcuffs placed on him as well somewhere along the way, judging by the bibliography, which is skimpy, heavy on WWE Books, and lacking the various shoot interviews and other forums these stars from the past have told their tales over the last number of years. (Gee, you don’t think that Solomon looked at a website while researching, do you? Apparently not, according to the “Legends Library.”) And really, can “Mean” Gene Okerlund really be the best choice out there to talk about Freddie Blassie as a wrestler?

That beef aside, we hardly ever get the picture of the person. There’s next to nothing about the wrestler’s families, their post-wrestling life or their hobbies.

But back to my initial point.

WWE Legends can’t seem to decide if it should dish all the dirt on those profiled, or if it is sticking to WWWF or WWF storylines. There’s a big difference. The days of the George Napolitano-type book with wonderful photos and storyline-bios has definitely passed, as great as they are to look back on now. You’d think WWE Books, of all publishers, would know that. Here’s Arnold Skaaland telling the reader that he threw in the towel during the Bob Backlund versus Iron Sheik WWF title match because he was worried about Backlund getting hurt. Or Solomon claiming that the North American title that Pat Patterson had won from Ted DiBiase was “upgraded to the Intercontinental Championship-a reflection of the prestige Patterson brought to it.”But then Solomon talks about some backstage issues various performers had, or battles with booze. It’s inconsistent. The curtain should be either pulled back or closed. The peeks we’re given are frustratingly incomplete.

And the pro-WWE/WWF/WWWF tone is downright laughable at times. Here’s Pat Patterson again. While Solomon justly explores Patterson’s incredible run in San Francisco, Patterson’s days at the end of his career in the WWWF seem to get more importance.

WWE Legends is also a book in need of a decent layout editor. For some reason, the name of the wrestler profiled is put at the bottom of the page, usually with a small photo. For the photos, the book mines the rich collection of Pro Wrestling Illustrated, but again, it’s hit and miss. There’s no photo at all of George “The Animal” Steele in his bio for crying out loud.

It’s a surface-level look at these great performers, at best, yet I can’t say it’s a terrible book. It isn’t. It will find a place on my ever-growing bookshelf as a decent reference guide to the way the WWE sees some of the stars of the past.