VANCOUVER, BC – Two things happened the moment Nathan Burke’s Achilles tendon ruptured — one, the future of both his family and wrestling career were called into question and second, both of these families sprang into action to assist the man known as Disco Fury through what will very likely be a challenging and difficult time.

The injury, Disco’s most serious to date, took place during a training session in Surrey, BC. In an interview with SLAM! Wrestling, Disco recalled what happened. “We were doing drills and I was hopping on one foot,” he said. That’s when his tendon ruptured, actually coiling half-way up his calf to create an injury that would eventually require 250 stitches to heal. “It sounded like a gunshot went off. I went down but, surprisingly, it did not hurt at all.” 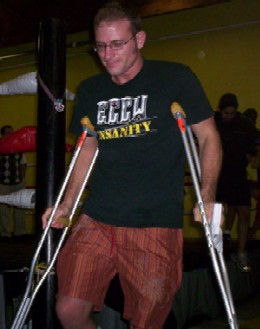 Disco Fury makes his way around on crutches. Photos by Fred Johns

In his eight-year history of pro wrestling, Disco has endured pain before. He has suffered through car accidents and nagging back problems but was always able to return to the squared circle. This time, it felt different. The students he was training at the time of the injury sensed that as well — even though he pleaded with them to continue the practice, they instead gathered around him.

Word of Disco’s injury spread, eventually landing at the feet of Vance Nevada, a co-trainer at ECCW’s House of Pain wrestling school. When Nevada learned Disco’s injury was so severe it had forced him to take time off work and now called into question any return to the ring, he felt compelled to act.

“Injuries that are legitimate scare the hell out of me,” Nevada said. “Especially when they not only keep a guy from wrestling, but from making a living as well.” Nevada has seen his share of injuries in the past — when a wrestler takes a bad spill in the ring or the rope snaps — but a serious injury like Disco’s was something else entirely. “Wrestlers have no health insurance, no worker’s compensation. If you get hurt in wrestling, you’re [screwed] — there’s no other way to say it.”

Disco’s situation was further compounded by a series of family stresses. His wife was recently in the hospital for a kidney problem and the couple is also expecting their second child in early November. Nevada also learned that Disco had planned to buy a house but had been forced to put those plans on hold.

That’s when the idea to put on a special Disco Fury benefit show came up. After pitching the idea to some of the other wrestlers and the House of Pain students as well, it was decided that a show would be held Saturday, August 19th with all proceeds raised to go directly to Disco Fury’s family. With only a short time to get things up and running, Nevada decided to send out a mass email to everyone he knew in the business to see if they would be willing to either send a door prize or a donation.

“The support from the wrestling community was awesome,” Nevada said after the benefit show. “We had stuff come all the way from Vermont.” Some of the prizes that were donated included a guitar from the Honky Tonk Man, a photo package from Paul “The Butcher” Vachon, a rare T-Shirt from Asian Cooger and the actual Canadian Unified Junior heavyweight title belt.

Nevada also recalled how another young wrestler, having just graduated from Lance Storm’s wrestling school, had come to the Pacific Northwest to wrestle for ECCW in a couple of dark matches. When he heard about Disco’s injury, he sent a donation. “The kid said he had met a lot of great people out here in Vancouver and assumed that Disco was one of them and sent some money,” Nevada recalled.

The show was exclusively promoted via the Internet and word of mouth, and the response was impressive, considering how little time had elapsed. Just under 100 people showed up to see the card and less than 48 hours after sending out the mass email, Nevada had heard back from enough wrestlers to confirm the card.

One of those wrestlers was Todd Kelly, who decided to come out of semi-retirement to work on the card. “When I saw the picture of the injury on the ECCW website and got the email from Vance, I had to come,” Kelly said. “I trained with Disco and we exchanged a bunch of belts. I told Vance I’d do anything for Disco, just let me know what I can do.” He was booked for his first match in 18 months.

Understanding what made the benefit show such a success requires understanding how highly regarded Disco is among his peers and his students. Michelle Starr, Disco’s trainer and co-owner of ECCW, remarked that coming into the business, Disco was not unlike those students he now trains.

“When he first started training,” Starr recalled, “he was a scrawny kid like some of these kids today and I didn’t think he had a chance to make it in pro wrestling. But he worked hard and gave 110% and he’s turned into a loyal guy who stood by my side and is a big part of this company for sure.” 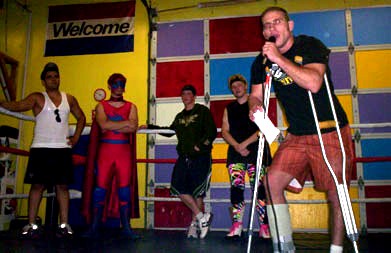 Nevada, one of Disco’s tag-team partners, echoed those sentiments. “Disco and I were initially put together by chance, not by choice,” he said. “It took us a bit of time to gel, but out of all the guys I have met in the past five years of my wrestling career, there is no one I would rather spend my time with than Disco. He’s always been great. We’ve never had a dispute or ever said one harsh word and I can tell you that is extremely rare.”

Much like the benefit show itself. The atmosphere was electric. Where normally the crowd would chant “Disco Sucks!”, they shouted “Disco Rules!” instead. And when it came time for Disco to enter the ring, they exploded into one of the loudest ovations in the company’s history.

Disco Fury was clearly overwhelmed by it all. And when it was announced that the combined efforts of the wrestlers and the fans had resulted in $1,425 being raised for Disco and his family, he very nearly broke down.

“This means so much to me,” he said into the microphone in a voice that wavered. “This is unbelievable. Every one of you makes me want to come back right now,” he told the audience. “I love wrestling with my whole heart. I am really overwhelmed by what each and every one of you who has come here to support me like this. And one way or another, I’ll be back. For damn sure, Disco Fury isn’t finished kicking ass in the ring.” 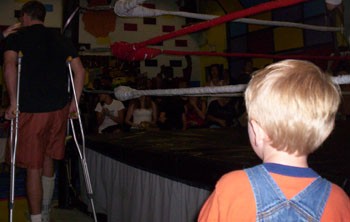 Jayden watches his dad limp away.

Then a touching moment took place. Jayden, Nathan’s four-year-old son, who had been sitting patiently ringside for the entire show, finally ran out of patience. “I’m coming in there,” he told his father and then crawled into the ring. It looked to everyone like he was going to hug his dad but instead he delivered a judo chop to his dad’s stomach.

“That’s my son,” Nathan beamed proudly. And then after some snickers from the crowd, Disco laughed, “Yeah, I’m a heel at home.”

When the show was over, and the fans had filed out, an unanswered question remained: would Disco Fury ever return to action in the ring? The jury is still out — doctors have said it’s very possible that his tendon could heal back stronger than ever. But those in the industry have also said that when one Achilles tendon goes, it’s not uncommon for the other one to go as well.

Although the future is a major unknown in his life, Nathan Burke/Disco Fury has refused to let the injury get him down. He has held the NWA Canadian Junior Heavyweight title six times, been to Japan and England and has been on local television. But perhaps more importantly, he has won the respect of everyone he has ever worked with and earned a special part in the hearts of his peers and the fans that paid tribute to him one summer weekend when everything about his future was a question mark.

“What can I say?” Disco answered after the show when he was asked how it felt to be the recipient of such respect and loyalty. “I can say thank you, but it’s just not enough.” And then, when everyone else had gone home except the wrestlers and one reporter, Disco’s eyes teared up and he whispered in as strong a voice as he could muster, “Thank you so much. You’re all champions.”

There was nothing left to say.