“Five or six years from now, I’ll look back and see it was just a blip on the radar screen.”

Sadly, we would never see if his statement would be true as the quote was pulled from a Brian Pillman appearance on Wrestle Radio U.S.A. radio show in May of 1996.

The statement comes on one of his last public interviews. An interview that is part of a new audio CD, Pillman: The Last Interviews. The CD is 70 minutes of Pillman’s appearances on Wrestle Radio U.S.A.

His name is often mentioned first when listing the young deaths associated with wrestling. Most proclaim that we never saw his full potential, and we are left to wonder. 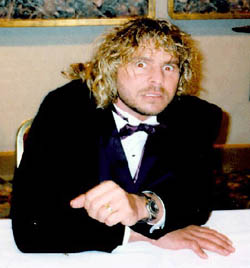 WWE recently announced the release of a Brian Pillman DVD set for September of this year, entitled Loose Cannon. The DVD will feature a biography of Pillman as well as matches spanning his entire career.

The hosts of Wrestle Radio U.S.A. were able to know Pillman very well, as he called into the show four times in 1996. Hosts Ed Symkus and Vincent Carolan were able to get the real Brian Pillman out and not the “Loose Cannon” that everyone else got.

“He was trying to create buzz for himself by getting this ‘crazy’ persona over,” Carolan recently told SLAM! Wrestling, “But in talking with us and realizing that we were reasonably knowledgeable about the business, he started to open up in further appearances.”

The two hosts have decided to release the best of Pillman’s appearances for all to hear.

Ed Symkus and Vincent Carolan were the duo that put out the book Wrestle Radio U.S.A.: Grapplers Speak (ECW Press) in 2004.

The Pillman calls come at some critical times during his career. They span from before his WWE signing through the controversial gun angle on RAW. Even though his first appearance on the show is in character, every bit of it is entertaining. He is more open in the rest of the interviews. And during one scheduled interview, Melanie Pillman, Brian’s wife, speaks to the hosts. No matter what Brian you got, you knew it was going to bring a chuckle.

“I’m in a wheelchair, but (Hulk Hogan) should be,” said Pillman following his car accident in April of 1996.

You can see a change in Pillman over the course of a few months. The car accident and pain he was in really affected who he was. And it affected how he acted.

“I think he decided in part to calm down and do legit interviews because of his physical discomfort level,” said Carolan.

Pillman was never afraid to say what was on his mind. He comments on Bret Hart, WCW, WWE, Shawn Michaels, Steve Austin and Paul Heyman, just to name a few.

A little known fact about Pillman comes out numerous times during the CD. Initially, Pillman was set to have a supporting role in Cop Land, with Sylvester Stallone. Due to Pillman’s ankle injury, the part was recast.

The interviews, because of the obvious honesty, make for enjoyable and memorable listening. It is something you can listen to in your car or at your computer, and you remember who Pillman was and what made him special. You do not need a visual of Pillman to realize he was different than most in the business.

Sadly, without him around, these are part of the last memories of Pillman: a man who died too young and too soon.