PHILADELPHIA, PA. — After 15 years of shooting wrestling from ringside, I’ve seen up close the risk and bumps wrestlers take — and even felt them first-hand on occasion. With such experiences, it’s safe to say I even reached a comfort zone when standing so close to the action; but on Saturday, June 10, at the New Alhambra Arena in Philadelphia, PA. that comfort zone was gone. I was shooting ringside for Combat Zone Wrestling’s “Strictly CZW” event. 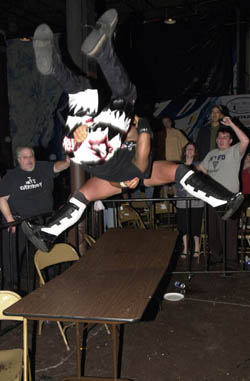 It started off as a treat, a new experience for me, shooting ringside for CZW. One of the regular fans even offered ringside security, other fans and myself some homemade cookies he brought in his tupperware. I began to wonder, How does CZW get such a horrible reputation??? After a few matches, wrestling promoter Tyrone “Maven Bentley” Scott came to ringside and suggested “You might not want to be at ringside for this next match.” Of course he was talking about the Tables, Chairs, and Kaos match next on the line up. I happily took a spot in a hard camera position and got a great bird’s eye view of the action that spilled to almost all corners of the world’s most famous bingo hall. I was grateful as I couldn’t have think of a more fitting name for a match that had broken tables, busted chairs and “kaos” from the opening bell.

After intermission, I reassumed my ringside position. Things were looking good as Chris Hero and Claudio Castagnoli put on a wrestling clinic as they matched each other move for move and counter for counter.

Then it was time for the main event. The BLK OUT (Ruckus, Eddie Kingston, Joker & Sabian) vs. The Forefathers of CZW (Zandig, Justice Pain, Nick Gage & LOBO). Promoter Maven Bentley made his way to ringside again but no warning this time. I figured it would be just another tag match full of hot tags. I could not have been more wrong! I quickly realized that Bentley had some bigger things to worry about than warning some photographer, as CZW staff carried panes of glass, wood boards covered in barb wire and thumbtacks to the ring. Between wrestlers, security and other staff there was over a dozen people ringside so I knew this would be one of the more challenging shoots I been involved with. But there was no time to start thinking for anything as the main event began from a brawl in the previous match. As the match began it seemed the safest place to be was in the ring itself as all eight combatants spilled out all over the arena. The earlier theme of chaos was alive and well in this match as photographers were bumping into security and announcers were bumping into timekeepers all in order to avoid the wrestlers who were bumping into tables, chairs and ringside fans.

There was no safe spot to stand in; at one point when the action was getting a little too close to my lens, I looked for shelter near the ramp way and I still found myself dodging shattered bits of glass that flew into the air as a wrestler flew into it. Trying to avoid that area, I crossed the ringside area only to step in about two dozen thumbtacks now embedded in the soles of my shoes. Even with all my experience of being at ringside, I made the rookie mistake of taking your eyes off the action as (I tried to pull some tacks out of my shoes) as Zandig crashed into the ringside barricade barely missing me by mere centimeters. As the match went on, the number one priority became not to get hurt and avoid the action — forget the photos!

If my words can’t help you imagine what happened, such a scene could be compared to news footage of riot and looting scenes. Human pinball with bodies running around in all directions with no regard for others.

When all was said and done, I took inventory; bits of shattered glass in my hair, sweat from the wrestlers was mixed with my own, drops of blood on my shirt and dozens of thumbtacks stuck in my shoes. I could honestly admit for the first time ever in my career, I was worried. Safety was not a priority on anyone’s mind, survival of the fittest was the theme of the night and you know what? I loved it!!!! That was a true CZW experience. I wouldn’t have had it any other way. My adrenaline was on overdrive, a feeling not many wrestling fans have experienced in a long while. CZW has its critics — and many of them — but what would one expect when attending a show whose company name contains the words Combat Zone? The words Combat Zone could not be more fitting to sum up such an experience and I thank them for it.

Mike Mastrandrea, of Toronto, has been a wrestling photographer for over 15 years and is currently a photographer for UK wrestling magazine Power Slam Magazine and is excited to supply this gallery for SLAM! Wrestling, his second, following Ring of Honor: A Photographer’s Eye from April 2006. He can be emailed at [email protected]. 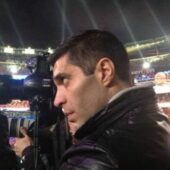