Wow, all I can say is … wow. I had planned on basing this week’s column around the popularity if the UFC and its fighters but something bigger has come up. This week I will be basing this column completely on Marlon “Tiger Khan” Kalkai, who passed recently in California. 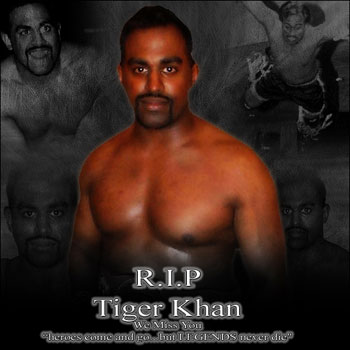 I had the honour and privilege to work with and learn from Tiger in Stampede in 1999-2001, and I can honestly say that there was a worker who never got his due. You hear about it all the time how if guys had only “got their shot” or “had one opportunity” they would have “made it.” A lot of these dubious claims are never backed up by proof or referral of said talent. I will be happy to tell you of how great Tiger Kahn was.

In ’99, I was hitting two years in the business and working almost 25 days a month with the Harts and Stampede Wrestling. Myself and a core of guys from Alberta, namely Duke Durrango, Greg Pawluk, Dean “Irish Red” Durrango, Bill Yeats, Ivan Thompson, Carl LeDuc, Eddie Mustang, T.J. Wilson and Harry Smith and a few others were working as much as we could to gain that all important to wrestling ingredient called experience.

But the problem was there were precious few “veterans” to learn from who were working around there at the time. And without vets to learn from, all you have are green guys trying their best but ultimately failing to get the point. I mean, don’t get me wrong, we worked our collective asses off, but it wasn’t getting us anywhere as far as psychology goes. But that all changed when Bruce Hart brought Tiger in from the east coast.

Tiger was immediately thrust into the locker room leader role and took to it like a fat kid on cake.

He was funny, patient, and above all, knowledgeable and started to have an impact almost immediately. Now I will tell you, he didn’t have it easy ’cause coming into a territory like Stampede can be hard. We had a “who the hell are you?” and “why should we listen?” attitude, and were able to back up our bravado with solid skills gleaned from the HARD training we did in the dungeon at least 2-4 times per week. Even on show days! LOL

But Tiger took it all in and gave back and earned respect from every guy in Alberta.

Tiger wasn’t a big guy. At 5’10” and 200 pounds, he was about average for the Stampede territory, but what set him apart from other wrestlers was a mind like a steel trap. He had a great head for the business and could be counted on to “come up with something” as Bruce liked to say, and have it make sense.

I am positive if he wasn’t trapped in the wrestler purgatory that is Western Canada he would have been well on his way to being a household name. He just had too much talent to deny.

One of my favourite Tiger moments was a promo where he was debasing the North American people as a whole and shaking his finger at us for not recognizing East Indian holidays. He went on to expound on the (completely fictitious) East Indian holiday called Mamaleekabooboo Day, likening it to Christmas and telling us how uncultured we Canadians were for not celebrating it. He actually makes mention of Mamaleekabooboo in a promo. I HIGHLY recommend you check out the genius that was Tiger Kahn.

In honour of Tiger I am going to propose that all those who knew him, and anyone else who should so feel the need to have their spirits and intellects lifted, join me in commemorating Tiger’s memory by making June 28th officially (to us anyway) Mamaleekabooboo Day. It would be a day for carousing, merriment and wrestling history study. Topped off with a shot in Tiger’s memory and a scream of INDIA!!!!!

Tiger helped me many times in so many ways. He helped me get tryouts with ECW. He gave me a place to stay in New York when I was there. He taught me psychology and mostly to have a sense of humour (his was legendary).

Tiger was my friend and I loved him.

I will miss him so very much.

Goodbye my brother. I hope I see you again some day and we can catch up like old times.

Apparently someone else somewhere needed Tiger more than we needed him here. And that is the way of the world. All we can do is show the people we care about that they mean a lot to us while they are here. It doesn’t have the same effect saying I Love You after they are gone.