Though his career as an independent wrestler spanned the globe, Tiger Khan (Marlon Kalkai) is probably best known for his run in Calgary in Stampede Wrestling during the promotion’s resurgence on television in 1999-2000. Following his death Monday, a few Stampede stars took the time to recall Khan’s role in the promotion. 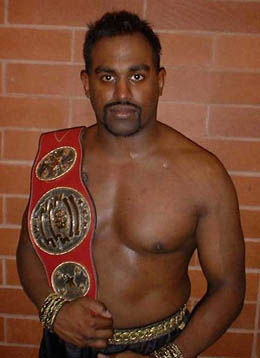 Not a big man, the 5-foot-10, 200-pound Khan was from Queens, New York. A fan since the age of 12 — Buzz Sawyer was his favourite — he started training at the age of 16 with Bobby Bold Eagle at Gleason’s Gym in Brooklyn. Others who started with him, circa 1989, included Jason Knight (later of ECW), Lou “Falcon” Coperis, The Black Sheep / Shark Attack Kid, Sandy Beach (Rick Allen), and Primo Carnero.

In an interview with Evan Ginzburg of Wrestling Then and Now, Khan recounted those early days. “His hard, brutal style was something I loved. In the beginning of the training, Bobby would make us break hundreds of falls; he’d throw us off the top rope repeatedly, beat us, kick us, and then the students who could take it remained in the school. About 99% got kicked out. … I wanted to be a wrestler so bad, and everyone told me I was too small and it just gave me the drive to continue.”

He debuted at the age of 17 on a small show in a small club in New Jersey against Lou “Falcon” Coperis. “I remember meeting him,” said Coperis. “He was 16 years old, 17 years old, just a little kid. He had heart though; he’d do things that a lot of people wouldn’t do. He would train hard and wouldn’t stop, and he pushed himself. I saw him grow into a man over the years. Wrestling is something that he wanted to do more than anything. That was basically his life.”

The key promotion for Khan was UCW in the Northeast, and it allowed him to meet many people that would shape his future, including Bruce Hart. Khan decided that there was still much to learn, and went west to Calgary.

However, as Tiger Mahatma Khan, he soon found himself in the role of locker room leader with the very young Stampede roster, and in a key spot behind-the-scenes with the promotion as well.

Harry Smith recalled that Khan was around at a time when a lot of the Stampede roster didn’t have very much experience. “He was a guy that was sort of a leader in the back, sort of a veteran that everyone could come to for advice,” Smith said. “He really helped out a lot of guys, and he was probably the most experienced wrestler at the time. He really helped elevate guys like Greg ‘Pistol’ Pawluck and ‘Hot Shot’ Johnny Devine, myself, T.J. Wilson. He was always a really good hand to have.”

T.J. Wilson concurred with his former tag team partner’s recollections of Khan. “He would teach all the guys. He was more experienced than most of the guys that were here. He definitely helped them out a lot traveling on the road. The time I was on the road with him, he helped me out quite a bit,” Wilson said. “He was totally the locker room leader. … He had a pretty good mind for everything, I thought.”

“He was a real ballsy guy. He took a lot of good risks, I guess, in hope that the fans would come back and support Stampede,” said Teddy Hart. “I think he was trying to do more than most of the guys in there. He had a great work ethic, from what I remember; a good sense of humour; a tremendous worker.”

“He was a great wrestler and leader for us; a hell of a worker. Just a really nice guy, very unselfish in the ring. He was certainly our most valuable star in 1999-2000 season, he helped us open up Stampede full-time,” recalled Ross Hart. Due to his experience on the east coast independent scene, Khan was tapped to have more of a role with the company. “He had a lot of great ideas. He would help in our dressing room on the out-of-town shows. He was just very reliable.”

In his interview with Wrestling Then and Now, Khan talked about his role with Stampede Wrestling . “I was responsible for the crew on the road and the most challenging part was keeping them positive. Positive mental attitudes. Because there was a lot of long drives. Not much pay. A lot of the guys were away from their families. We worked on average 28 days out of the month. It’s tough being on the road every single day. But it was a good experience. Absolutely. Just the knowledge that I gained. Being a part of the company that was responsible for some of the biggest names and best talent ever. Being in the center of it all. Being involved in all the main storylines; doing TV. It was my first real TV experience. I was even involved in a lot of the booking on the road.”

One of Khan’s strength’s, according to Ross Hart, was his ability to adapt to his opponent. “He wrestle hardcore, as he did with Sabu; he could also wrestle as a high flyer as he did with Greg Pawluck or Johnny Devine. He was very versatile.”

Aside from Stampede, Khan made dozens of overseas trips — Saudi Arabia, Lebanon, England, Wales., Trinidad — and got to know bigger names like The Barbarian, Luna Vachon and Gangrel, Pierre Carl Ouellet.

Ginzburg was particularly hit hard by Khan’s death. The two had become close in recent years. “He was one of my closest friends,” said Ginzburg, explaining that he was familiar with some of Khan’s wilder habits. “As far as we all knew, he was clean recently.”

“I went on many, many a road trip with Tiger. We went to Roland Alexander’s school 3,000 miles away for show, we ran around Tijuana at three in the morning and had a blast at countless New York, New Jersey, Pennsylvania indy dates over the years,” said Ginzburg. “Just a great human being, universally liked in the industry. You would be hard-pressed to find anybody with a bad word about him. We shared each other’s hopes and dreams on long trips. He lived some of them, travelling to exotic places around the globe to wrestle … Unfortunately, he never fully attained his dream of really headlining for major promotion in the United States. That was something that did weigh on him.”

Ginzburg plans to dedicate future work to Khan, whom he considers the little brother that he never had. “The guy was a quality wrestler. He was a good, old-school, hold-for-hold wrestler, which you don’t see all the time. He wasn’t a highspots guy, even though he was relatively young, he didn’t really do a lot of flying stuff. He was proud of the fact that he could actually wrestle, which is why he did well in promotions like Calgary.”

In 2001, the buyout of WCW really devastated Khan. He had been training in Atlanta at the Power Plant, and felt that his big chance was just around the corner.

“He never had his opportunity. He was a great talent, a great worker. He’d work hard. Sometimes, he’d get lazy with certain things, but if he saw a silver lining there, he was the one to point it out,” said Coperis, further explaining that Khan was “haunted” by the missed chance.

The body of the 33-year-old Khan was found in Los Angeles on Monday, where he had been job-hunting. No foul play is expected, and he is believed to have died in his sleep. An autopsy should provide a cause of death within six to 10 weeks, but it is expected to be heart-related. Funeral arrangements are not known at this time.