PHILADELPHIA — Though the New Alhambra Arena in Philadelphia is often referred to as the ECW Arena, on Friday June 9th, the building belonged to TNA Wrestling.

The event, titled “Hardcore War”, marked TNA Wrestling’s first show at the former bingo hall at Swanson and Ritner, but if the fan reaction has any influence, it will certainly not be their last. Voracious for ECW-like violence, the crowd was not disappointed. In fact, the main event itself may very well have been enough to satisfy their bloodlust -– and bring back nostalgic memories of a classic ECW moment. 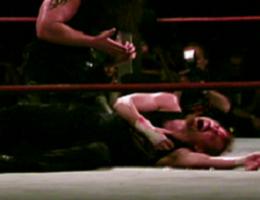 That main event pitted Team 3-D, no strangers to ECW Arena, in a three-way Philly street fight against the teams of America’s Most Wanted and the James Gang. This match came about when AMW came to the ring and issued an open challenge to any team in TNA. The house lights went out, and when they came back on again, the crowd was disappointed to see the James Gang in the ring ready to answer their call. The two teams engaged in some ECW-bashing until Team 3-D came out to defend their hometown Philly crowd. The match quickly escalated into a huge brawl that spilled out of the ring and throughout the arena. Though this reporter couldn’t see much, it was evident from the crowd reactions and the various sounds of chairs smashing that things were getting pretty ugly. At one point, it seemed that the fight had even left the confines of the building and continued on the sidewalk outside. Eventually, the teams made their way back to the ring, where Team 3-D called for some crowd participation, in the form of throwing chairs into the ring. Recreating a scene from 10 years ago, the Philly crowd happily complied, and soon the ring was a river of chairs. This was enough to scare away both AMW and the James Gang, and the former Dudleys stood triumphant.

Afterwards, the duo rallied the crowd with an emotional promo, calling out A.J. Styles and Christopher Daniels, and passing the torch to the next generation. The night ended with Brother Runt, aka Spike Dudley, joining his storyline siblings, and pledging allegiance to TNA, proving this by tearing up the contract that he had recently received from WWE to appear at their ECW One Night Stand pay-per-view, to the cheers of “TNA! TNA!”

Overall, the event was an amazing experience and was truly another classic show in a building that has seen more than its fair share of them.

Simon had a few problems in this one, including receiving a couple of bites from Sharkboy — one on each end. Sharkboy won after hitting the Dead Sea Drop.

Incredible X-Division action had the fans chanting for both men throughout. This was high-paced with plenty of hard hits, including some mighty kicks by Lethal and a thunderous sunset flip powerbomb by Dutt. A moonsault by Dutt nearly earned him the win, but it was a release German flapjack by Lethal that ultimately scored the pin.

Apparently Runt looks a lot like ECW’s Little Spike Dudley, because that’s the guy the Philly crowd started cheering for when he came out. And, yes, I know. A nostalgic moment early on when Abyss threw Runt deep into the crowd, who caught him and surfed him back to ringside. Runt tried to fight back with some insane chair shots and an Acid Drop, but Abyss was too big and powerful to be vanquished. A Black Hole Slam onto a pile of thumbtacks ended the night for Runt.

The TNA Knockouts rarely get a chance to show off their mat skills, and this match showed how unfortunate that is. After a decent mat-based match, Traci got the win with a rollup. After the match, she and Christy celebrated by stripping Gail down to her bra.

After an extended anti-ECW, anti-Philly rant by Jarrett, Rhino’s comments were short and sweet: he was there to destroy Jarrett. Gail Kim’s interference helped Jarrett gain an advantage early, and it was only when he missed a rare move off the top rope that Rhino was able to recover. He picked Gail up with every intent to heave her three rows deep, but let her go to save himself from an attempted guitar shot from Jarrett. He hit the GORE out of nowhere and got the pin. After the match, Rhino told the crowd that he had been offered an ECW contract, but was sticking with TNA.

Petey ducked and dodged Lynn’s early attacks, but Jerry was finally able to catch him with a somersault dive, followed by a powerbomb that crashed the Canadian’s back against the apron corner. The match went back and forth after that, with neither man gaining a clear advantage. Petey went for the Canadian Destroyer, but Lynn blocked that and went for his cradle piledriver, from which Petey escaped. Then the two exchanged sharpshooters. This exchange went on for a little while, until Petey suddenly nailed Lynn with the Destroyer and got the win. Great match.

I’m not nearly good enough a writer to eloquently capture in words how brilliant this match was. It was a veritable poem in the ring and may very well have surpassed their pay-per-view match from a few months ago. Highlights will be shown on the next edition of Impact on Spike TV, and I urge everyone to check this one out. Joe won this incredible contest by submitting A.J. Styles. After the match, Joe left, and America’s Most Wanted attacked Styles and Daniels, clearing them out of the ring before the main event.

“Bloodthirsty” Bob Kapur is grateful for two things. One, that he didn’t get hit with a flying chair. And two, that on the way back to his hotel, he found a late night place that serves the best Philly cheese-steaks in town, and really cheap beer, too.