Playing baseball led to a career between the ropes for 2006 Cauliflower Alley Club honoree Jessica Rogers. 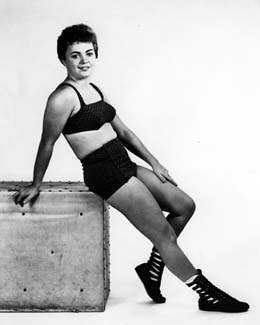 Born Joan Ballard, she was known for her fastball skills in her hometown of Portland, Oregon. The local media coverage for her athleticism caught the eye of Man Mountain Dean Jr. and promoters Ted Theirsandt and Virgil Hamlin.

So in 1958, fresh out of high school and only 17 years of age, Ballard gave up her plans of pursuing a career in physical education and started her wrestling education instead.

Thinking back, she says the training came easy to her. However, her first match was a challenge.

She recalls her debut bout was in Chicago against Aida Ash, who was nicknamed “The Strongest Lady.” Ballard laughs when asked if she won, and then immediately replies “no!” She confesses she left the match with two black eyes and it was her toughest bout ever.

“I just couldn’t believe it,” she revealed. “She tied me up where I couldn’t do anything. And she really hurt herself by doing so, I don’t think she ever got booked after that.”

Ballard traveled through Salt Lake City and then on to the famous Marigold Gardens in Chicago where she stayed for five years. Then afterwards a call from Jack Pfeffer in New York had her traveling to St. Louis.

It was there Ballard got the name Jessica Rogers. A promoter there, whom she prefers to keep nameless, got the idea because he used to go and gander at the exotic dancers. Coincidentally, Jessica Rogers just happened to be the name of the top exotic dancer at the time. Ballard says she didn’t have a problem being named after a controversial figure; she thinks the name is nice.

For the next few years, Rogers worked wherever she was sent, although the petite blonde says she preferred to work where it was warm. Her favorite locales were Hawaii and Australia.

And she worked with top talent including Lorraine Johnson, Kay Noble and she both wrestled and partnered with Penny Banner.

“Her determination and speed was a real surprise to me when we wrestled each other,” commented Banner. “I developed a real respect for her speed and determination.” 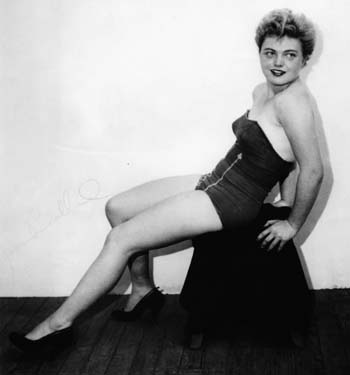 Ballard’s career defining moment came when she was booked against her idol, June Byers, in 1970. Ballard remarks that Byers had always been one of her favorite wrestlers. It is a night she will always remember.

“I can’t even explain it when you wrestle your idol,” she recalled. “It upset me to wrestle my idol. Of course I didn’t beat her. But she was great. She was my champion.”

Ballard had her last match in Tulsa, Oklahoma in the late ’70s. Afterwards she went into the nightclub business and then the automobile business. She retired in 1999.

She has nothing but fond memories and several stories when it comes to her wrestling career.

She recalls that she was always dressed up and got to go to the beauty shop. She also remembers the fun road trips where she and the women wrestlers she was traveling with would give each other nicknames and then call local radio stations requesting songs for each other. They couldn’t use their real names to avoid breaking kayfabe. Ballard says she was known as “Wild One.”She is quick to point out that wrestling has definitely changed.

“I think you should always bring out the glamour side of women’s wrestling, but now they are just making fun of the ladies really,” revealed Ballard. “It’s just too much boobs.”

For now, Ballard is anxious to catch up with her friends at this year’s CAC reunion. She jokes she will have to get in shape for the event.

“I’m looking forward to seeing everyone, I suppose,” confessed the 68-year-old. “I think the biggest thrill will be to see all my friends again.”

With a warm laugh she adds, “I mean I know who I am and I know I was good.”

Ballard currently resides in Portland. This will be her first CAC reunion.