Things sure have changed since the days when wrestlers’ theme songs were short, catchy hooks looped over and over long enough for a ring entrance. The latest WWE theme compilation Wreckless Intent could actually be mistaken for any number of radio sampling CDs with a line-up featuring some legitimate heavy-hitters.

To start off, though, I really wish I knew what the intent of the title Wreckless Intent is. After aggressively-charged titles in the past such as Forceable Entry and, well, Aggression, is this a kinder, gentler WWE product? I mean, once you get past the fact that “Wreckless” is not a word that you’ll see anywhere in existence beyond this CD, it’s actually saying that the “intent” is not to wreck anything. That’s downright peaceful. If this is a hippie album, where’s Dude Love? 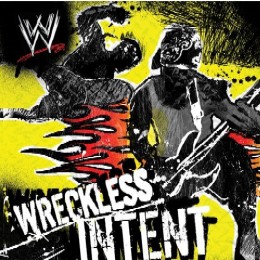 Anyway — the music. The highlights include the opening track of Batista’s theme I Walk Alone, ramped up by Saliva. Saliva’s involvement with the WWE is very extensive, providing themes for, among others, Chris Jericho and the Dudley Boyz, and having performed live at both Wrestlemania X8 and Survivor Series 2002. Other songs like Fury of the Storm by Shadows Fall for Rob Van Dam and Burn in My Light by Mercy Drive for Randy Orton push familiar rock buttons, but that doesn’t take away from the song. Rather, that’s the point. An entrance theme is like a film’s score -– you’re not supposed to be listening to the song, it’s supposed to be supplementing the wrestler’s entrance.

Still, it bears repeating that this CD stands on its own legs more steadily than previous WWE theme song compilations. The inclusion of P.O.D.’s Booyaka 619 for Rey Mysterio Jr., following their live performance of the theme before Mysterio’s Heavyweight Title win at Wrestlemania 22, Motorhead’s King of Kings for Triple H, also introduced at Wrestlemania 22, and Some Bodies Gonna Get It by Three 6 Mafia for Mark Henry add star power and take this CD beyond simply a fan’s collection item. Let’s be realistic: it’s possible that the association with Three 6 Mafia may be as close to an Academy Award as Vince McMahon can ever get (they won for Best Original Song from the Hustle & Flow soundtrack).

A pleasant surprise was Torrie Wilson’s new theme A Girl Like That, performed by Eleventh Hour. It’s a straightforward song riding a fine line between rock and pop, and it manages to stand out from the rest of the album in a good way. As for another “diva’s” song, you have to feel a little sorry for Maria, who receives With Legs Like That by Zebrahead for her theme. What’s what? You don’t think Maria is as famous for her gams as was, say, Stacy Kiebler? You’re right, which is why it’s odd that this song, written for Kiebler, has been dumped onto Maria. I suppose the WWE wasn’t able to secure rights to Maria from West Side Story, or How Do You Solve a Problem Like Maria from The Sound of Music for that matter.

So, where does this CD rank on a scale from, say, Piledriver to The Beatles’ White Album? Closer to Piledriver, sure, but I’m going to go on a limb and suggest it’s a keeper.