Current WWE Women’s Champion Mickie James is quick to credit her time in Ohio Valley Wrestling for much of her success. But it was also in OVW where became familiar with her latest challenger, Beth Phoenix.

James was in the Louisville, Kentucky WWE developmental territory from August 2003 until her WWE debut in October 2005. She clashed with Phoenix there on numerous occasions. 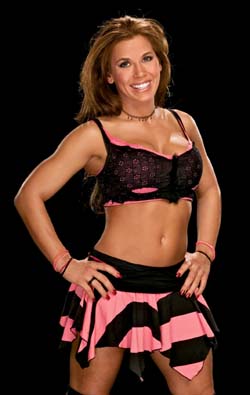 “She’s a really good competitor and an excellent athlete. I don’t really know what to expect from her. She’s definitely a talented girl, and that’s her style,” James told SLAM! Wrestling from her Virginia home.

But her association with Phoenix goes back even further than that. “I wrestled her in her very first match ever, it had to be five or six years ago,” she recalled.

Going back a half-dozen years, the 26-year-old James herself couldn’t have been wrestling long. In fact, she started wrestling in 1999, but worked before that as a valet. Under the ring name Alexis Laree, she developed into a very credible performer, and perhaps just as importantly, one who wasn’t afraid to ask for advice.

She attended a Dory Funk Jr. Funkin’ Conservatory week-long camp, had a tryst with ECW in 1999, and sat in on a couple of Ricky Steamboat training camps.

“I took advantage of all those camps that were affiliated with schools that were around me. I worked with Maryland Championship Wrestling a lot, that was my base for the years that I was wrestling on the indies,” the 5-foot-4, 128-pound James said. “They also did a Ricky Morton and a Bobby Eaton camp, which was really cool. You just learn so much stuff. You also have to be able to, when you are at these indy shows and you see these veterans, you have to be able to ask them advice and see if they will watch your match. A lot of it is that fear, people are scared to ask them for advice, because they don’t want to bother them. I don’t mind being annoying, I guess, I don’t know.”

It wasn’t all that different in OVW, where she soaked up all the information she could from a variety of trainers.

“OVW was awesome for me. In the two years I was there, I pretty much re-learned everything that I learned in the previous five years over again, and polished everything. It changed me,” she admitted. “I had some of the best trainers come through there — Lance Storm, then Rip Rogers who was really good, more old-school, and I loved Lance, he was one of my favorites. Our final trainer, when I left, was Al Snow, and he was really awesome. Plus you had other people coming in too. Whenever someone was injured, before they came back to TV, they’d come down there for a few weeks and then they would share their knowledge, and then they would go back to TV. It was quite an experience.”

The regular payday while in the developmental territory was something new. In the early years, James admits, it was a challenge to make ends meet.

“The easiest job to keep when you are wrestling is a waiting job, or something like that. I waited tables at Olive Garden, and a few different places. They’re the only ones that can work with your schedule, and even they get annoyed with your schedule sometimes,” she said.

Traveling 20 hours for a $25 payday got pretty old pretty quick, but it was a necessary part of paying her dues. As the name Alexis Laree got better known, so did her paydays. “In the later years when I was wrestling, before I got signed, I was making much better money than when I first started. When I first started, I was losing money left and right. But then as I got better and more experienced and my name was more valuable, then I was making a little more money.”

To a national audience, she first really became a known quantity in March 2003, when she arrived in TNA. Initially, she teamed with Amazing Red in his fight against X Division champ Kid Kash and Trinity. Later, Laree would be the first member of Raven’s group of misfits known as “The Gathering” and be a thorn in the side of then-NWA World champ Jeff Jarrett. She even was in two Clockwork Orange House of Fun matches while in TNA. 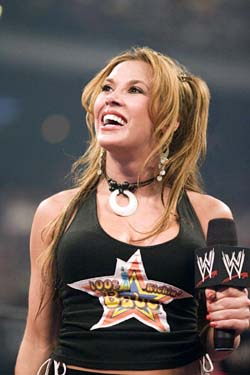 But those days seem in the distant past now, a lifetime ago. Once in the WWE, James was thrust into a spotlight storyline with Trish Stratus. She was first Trish’s savior, then stalker / spurned lover, and finally at Saturday Night’s Main Event, James made a full heel turn, which led to her victory at WrestleMania 22 in Chicago.

Mickie had high praise for the currently-injured former fitness model. “She’s awesome, very professional and very nice, and she’s very talented. It’s definitely a treat to work with someone who’s talented, and they know what they’re doing, and they know what they’re talking about. It helps out a lot because then you have two minds coming together trying to work something together that’s going to be entertaining and tells a story,” James said.

Unlike many of the storylines for the men, the James-Stratus thread has been going on for almost a year. James believes that it has worked so well for a couple of reasons — they are beautiful girls, but then can also wrestle. “It is World Wrestling Entertainment. It’s not, you know what I mean? So I think the wrestling aspect definitely helps. People really want to see that, and that’s why I think they’ve really been so involved in the storyline that we’ve been in lately, because it keeps you involved and the action is really good.”