Time to get one thing straight — though Sara, Corey, Mr. Lahey and Randy will be at the Halifax Forum’s Multipurpose Room on Friday, June 2nd, it’s not a Trailer Park Boys event. Instead, it’s the third Maritime Cup, and surprise, surprise, one of those Boys is behind it.

And it’s not the Green Bastard either. 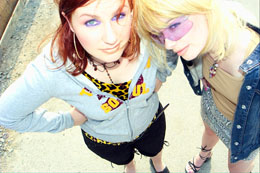 Instead, it’s one of the queens of the trailer park misfits, the stunning redhead Sarah Dunsworth, who has thrown her decade of behind-the-scenes experience on the East Coast movie and television scene into the organization for the Maritime Cup.

Dunsworth has formed a tag team with Harold Kennedy, who promoted the previous Maritime Cups and is known as “New Scott” by the local wrestling community. Kennedy is quick to admit that Dunsworth has opened a few doors. “Just being able to use her name on the show has generated so much interest from newspapers and radio and television. Having her name associated with it is great,” he said.

The main focus for Dunsworth will be the third episode of the documentary Wrestling With Reality.

It has only been in the last few years that Dunsworth has gotten into wrestling. Her first appearance, playing off her popularity on Trailer Park Boys was at the second Maritime Cup.

“I never have been a big wrestling fan. I think I say this all the time, but I did like to smoke joints and watch wrestling on TV, late night TV,” she laughed. “I’ve never been a passionate follower of wrestling until I got backstage at the Maritime Cup II. I became completely fascinated with the interactions of people, how talented and hard working these guys are. I started to learn stuff about the ins and the outs of the wrestling business, and all the little in terms that they have.”

She soon learned, however, that her interest in wrestling only extended so far. “I went to Wildman Williams’ wrestling school for one weekend, and I got my ass kicked. I realized that I’m not in good enough shape to do that, and I’m not an athlete.”

One thing Dunsworth has learned is not to take too many preconceived ideas to a wrestling show, and that carries over to her documentary. “I definitely have a theme of the show in mind, but we’re going to see what unfolds because one of the things that I’ve learned at various shows is sometimes something big will happen and it changes the whole night.” In fact, at one small show she was at, the ring broke a couple of hours before showtime, and she was privy to the chaotic but determined resolution backstage.

The eventual goal is to make Wrestling With Reality a regular television show. It’s a world that Dunsworth is more than familiar with. Her father is John Dunsworth, aka Mr. Lahey on Trailer Park Boys, and she has been acting since she was six years old in local theatre. Many small television and commercial roles followed, and she progressed to working as an assistant director.

“The film world is a place that I’m very comfortable in, and I have a lot of my film friends coming out to help me on this,” she said, explaining that the step up to directing a documentary feels like a natural progression.

What is new is the promoting end of the wrestling business. From her clothing store, Junk and Foibles, on Barrington St. in Halifax, she has been selling tickets and pushing the show. The Halifax Forum Multipurpose Room will seat around 1,000 people, and the idea is to cover all the bases.

“What we’re trying to do is get fans that don’t know that they’re wrestling fans yet out to the show,” she said. “There’s a lot of different layers to the show. There’s going to be burlesque girls there … special guests Mr. Lahey and Randy from Trailer Park Boys, and the band, Blackout 77, which have a huge fan base in Halifax. So we’re just trying to use these things to get people to come out to the show that maybe normally wouldn’t come out, because I can guarantee that they’ll have fun when they arrive.” After the show, there’s a party at Hell, sponsored by Propeller Beer, with The Third Six performing as well.

But don’t go to the show expecting a Trailer Park Boys episode.

“I think there’s a cross-over audience. Fans of one could be fans of the other,” she said cautiously. “Something that I want to make sure that I’m very clear about is that what we’re doing, the documentary we’re shooting and the TV show we’re creating, has really nothing to do with Trailer Park Boys. It’s not going to be like that show at all. Fans of that show will like our show because it’s going to be intelligent and interesting, funny and weird.”

The Maritime Cup is Friday, June 2nd at the Halifax Forum Multipurpose Room. According to Kennedy, fans can “expect to see the best wrestling show since the last Maritime Cup.” Headlining is TNA star Bobby Roode, who made a name for himself working in the Maritimes and last wrestled there in October 2003, when he won the inaugural Maritime Cup. Kennedy is being coy about Roode’s opponent, but the rest of the show looks like this:

If you didn’t get the Green Bastard reference, then it’s time to go out and get the DVDs of Trailer Park Boys! It’s one show that SLAM! Wrestling Producer Greg Oliver never misses. Get a rum and coke, sit down and watch just about any night on Showcase in Canada. It also runs on BBC America and the BBC. Email your favorite Trailer Park Boys moments to Greg at goliver845@gmail.com.