When Olympians turned actors are discussed, names like Johnny Weissmuller and Glenn Morris are brought up. When old wrestlers turned actors are talked about, it’s Mike Mazurki and Woody Strode that get the billing. Yet Nat Pendleton, firmly entrenched in both camps, with a silver medal and more than 100 films, is often overlooked.

Born in Davenport, Iowa in 1895, Nathaniel Greene Pendleton was the son of a prominent lawyer and a descendant of Revolutionary War hero Nathaniel Greene. His family left the farm for Cincinnati, Ohio, then New York City. 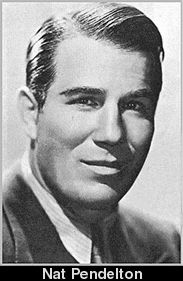 He’d make his way to Columbia University in NYC, where he was enshrined in the school’s Athletic Hall of Fame in February 2006. “Pendleton was a powerful, handsome athlete who instantly became one of the most recognized figures on campus. He won the Eastern Intercollegiate Wrestling Association (EIWA) championship at 175 pounds in 1914, and followed it with another in 1915. Shortly after his 1916 graduation, he won the National AAU Wrestling Championship, representing the New York Athletic Club,” the school’s bio on him reads.

Pendleton went off to the 1920 Olympic Games in Antwerp, Belgium, where he competed in both the Freestyle and Greco-Roman disciplines. He didn’t place in Greco-Roman. In Freestyle, he competed as a Heavyweight (now known as the Super-Heavyweight division). Pendleton lost a controversial decision to Robert Roth of Switzerland.

“The final freestyle bout was between Robert Roth of Switzerland and America’s own Nat Pendleton,” wrote respected wrestling historian Mark Hewitt. “Roth was awarded a very controversial decision. Pendleton actually won the referee’s decision, but the judges overruled it. Nat settled for the silver medal, despite all the ensuing objections and protests.” He would also win the 1925 European amateur heavyweight championship.

Back in the U.S., Pendleton turned to pro wrestling under New York promoter Jack Curley. Wrestling in this era was not totally a work yet, with elements of true shooting cropping up on a regular basis. Pendleton was unable to crack the top ranks of the pro business, with a select few promoters keeping top stars like Strangler Lewis, Joe Stecher, and Earl Caddock locked up and away from true challengers to their supremacy.

Frustrated, Curley and Pendleton circulated a challenge, claiming the Olympian could beat Strangler Lewis and another wrestler on the same night, or boxing champ Jack Dempsey in ten minutes in a no-holds barred match.

“Bowser presented Pendleton’s opponent … The Unknown,” wrote Karl Stern in a DragonKing Press newsletter from June 2004. “On the conditions that Pendleton accept the challenge from The Unknown with the winner taking side-bets and the entire purse, the loser walked away with nothing … if he could walk away at all. Pendleton and [Boston promoter Paul] Bowser both posted a $2,000 appearance bond. Pendleton and Curley then placed a $2,500 side bet on the match.”

“The Unknown” turned out to be “Tigerman” Jack Pesek. Historian Mark Hewitt has deeply researched the match, which took place on January 25, 1923 at the Grand Opera House in Boston. He wrote that Pesek took the first fall after 35 minutes with an ankle lock. After a 10-minute break, the second fall began and Pesek took that one took, hooking Pendleton’s right foot and scoring a second submission.

It was the first time that Pendleton had been pinned in wrestling competition.

Pro wrestling quickly lost its luster for Pendleton, who worked for Standard Oil in Portugal as an auditor. When he returned to New York, he took a job as an executive of True Stories Films. It wasn’t long until he began acting himself, on Broadway in Naughty Cinderella and The Gray Fox.

In 1924, Pendleton appeared in the first of his 109 movies, The Hoosier Schoolmaster. Fox Studios hired him on a year contract, and he was off and running.

Pendleton was “generally seen as the dumb mug,” wrote James Robert Parish in Hollywood Character Actors. “[He] typically played a well-meaning clod or the slow-grasping butt of the antics of such comics as the Marx Brothers and Abbott and Costello,” explained Katz’s Film Encyclopedia.

His best known role is as famed strongman The Great Eugen Sandow in the 1936 Oscar Best Picture winning The Great Ziegfeld. (The role was offered to him after his performance as a strongman in the Marx Brothers’ 1932 Horse Feathers.) He also co-wrote 1932’s Deception.

Pendleton’s Brooklyn accent became an asset as films moved into the sound era. In the wrestling flick, Swing Your Lady, he tells Ed Hatch (Humphrey Bogart), “Aw gee, talk United States, will ya.”

As the simple-minded ambulance driver, Joe Wayman, Pendleton appeared in numerous Dr. Kildare features. He was in both Thin Man movies as well.

In 1947, Pendleton got out of the acting business, and settled in a suburb of San Diego. He died of a heart attack on October 11, 1967, survived by his second wife, Barbara Evelyn (Margaret E. Carse), and two brothers, Steven Gaylord and Edmund. (He was widowed in his first marriage.)

His recognition has been slow in coming for his wrestling accomplishments, but Pendleton was inducted into the International Wrestling Hall of Fame as a part of the Class of 2004.