“There is very little out there… at least that I have found,” said Chapman. 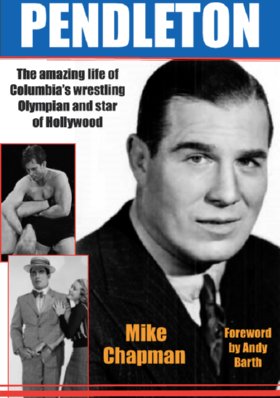 There is some overlap with an earlier biography on Earl Caddock, which helped propel Pendleton onto his radar.

“I am a huge Earl Caddock fan, as a wrestler and even more so as a man. I love that entire era, so that helped stimulate my interest in Pendleton,” he said, revealing a future project. “I am also a big fan of Joe Stecher and am working on a little booklet about him… lots of sadness in his story, though.”

A key figure in both the Caddock and Pendleton books is Mary Lee Pesek, the daughter of John Pesek. “Mary Lee Pesek told me that her dad really respected Nat Pendleton and that went a very long way with me.”

A long-time wrestling writer, and the man who established The National Wrestling Hall of Fame Dan Gable Museum, first in Newton, Iowa, and now in Waterloo, Iowa, Chapman gave a little thought to the question, If you had one question to ask Pendleton, what would it be? “The question I would ask Nat — do you think you could have beaten Pesek in a rematch, or was he on another level? How about Ed Lewis?”

That leaves aside the mysterious sideline that Pendleton apparently had early in his adulthood, working as a bandito for the Mexican government. Chapman tiptoed around it in the book, since it was virtually impossible to verify. “I left it open ended because I frankly have no idea. I am just reporting what was written and will let others decide, or investigate further if they want to spend that much time in research. For me, it was not that important to the book. ‘I report, you decide’ sort of thing.”

Similarly, no wrestling historian has ever been able to pin down a specific date or match where wrestling morphed from a legitimate athletic competition to a worked match with a predetermined finish. Chapman firmly believes that Pendleton was on the level.”I think most if not all of Nat Pendleton’s early matches were legit. And there is the story about Jules Strongbow telling Gene LeBell that Nat was a real shooter. As someone who has been trying to understand the evolution of the sport/business for over 40 years, I don’t think we can ever say, ‘This is the time when pro wrestling made the big switch.’ It was a slowly evolving thing, and moved at different speeds in different parts of the country.”

Compared to what has been written about other Olympians and actors from the 1920s, the Pendleton book by Chapman might be a little short, but the author points to the exceptional images that balance out his prose.

“One of the things I am proudest of in the Pendleton book is the photo section. There are some wonderful images there, including the ones of Nat and Paul Berlenbach squared off (thanks to Mark Hewitt) and the poster about his challenges (thanks to Notre Dame),” said Chapman. “The photo section alone is worth the price, I think.” 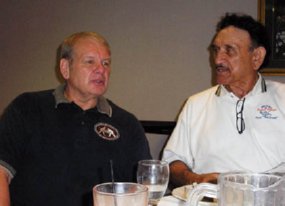 Mike Chapman and Abe Jacobs in 2008. Photo by Greg Oliver.

Chapman further considered his own experiences talking with amateur stars who turned professional wrestler through the years, and explained how that lead to what he wrote with Pendleton.

“Pro wrestling is such an enigma. I have spent at least a hundred hours in private conversations with Lou Thesz, Verne Gagne, Bob Geigel, Dan Hodge, Bobby Managoff (that was really interesting), Gene LeBell, Jim Raschke, Brad Rheingans, Jack Brisco, Bob Roop, Dick Hutton, Gene Kiniski and Fritz Von Goering, and others, and I know that egos can get involved in a very big way and ‘shoots’ have occurred in small gyms and even in grass over the years, many times. This is an ego-driven business, from top to bottom. Everyone wants to know who can beat who; that still matters to true wrestlers like Dan Severn, Kurt Angle and Brock Lesnar. Of course, the money means more — far more — but the matter of who can whip who is always there, lurking beneath the surface,” said Chapman. “When I write a book like Caddock or Pendleton, my goal is to provide an overview of a man’s life and career, not to spend years in research so I can tell every single move he made throughout his career. I think people now know a lot more about Nat Pendleton and if they so choose can use my work as background to investigate further. For me, I am satisfied to have told Nat’s story in this fashion.”