In praise of young talent

There is no other feeling like the anticipation of something you have worked for coming to fruition. When you are any kind of athlete be it figure skater, soccer player or badminton player, the expectation of that next big game, match, or contest or whatever, is so overwhelmingly dominant in your mind that it’s hard to think of anything else.

Pro athletes, or athletes who compete at a very high level of skill, have the ability to completely focus their minds on a certain goal so that all other obstacles or distractions are completely ignored or dealt with so quickly and efficiently they weren’t even registered. This kind of focus takes years or training and more importantly discipline and dedication, and once it’s achieved becomes a “zone” that is almost trance like to watch and inspiring to be around. 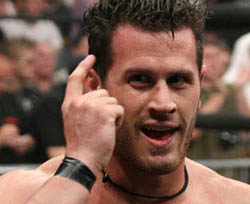 I have had the pleasure to train in the gym with some pro bodybuilders who, when they are lifting, hit that “zone” almost effortlessly. It’s amazing to watch and can really teach you something about yourself as you notice the difference in what one of “them” do to work out compared to what you do.

The same can be said for a number of guys I have been in the training ring with as well. Case in point here Alex Shelley. Here’s a guy who is only 22 years old and already he’s able to hit that “zone” as soon as he steps through the ropes.

In returning to Windsor this past week, I had the opportunity to go to the Can Am training center for a bit and watch Alex go through some chain warm ups. I tried to get in and roll around a bit but was very limited thanks to the sprained knee I received working a giant hump and ham sandwich (here’s your nickel, Daniels) on Saturday. So in frustration at my limited mobility I ended up leaving. But not before I was so thoroughly impressed with the ease and fluidity of Mr. Shelley that I decided I would dedicate this week’s Intervention to him and another inspiration. I’ll get to the other one in a bit.

I find it very odd to see such a level of expertise in a guy so young, but these days people are realizing their true callings pretty early in life it seems. The benefits of the information age? In years past it would have taken a ridiculous amount of time, money and travel to compile the necessary knowledge Alex possesses. But with the advent of tape trading and a lot of free time to study said tapes, Alex has proven that you can achieve wondrous things with a little effort and dedication. I hope you all appreciate what a tremendous talent this man is, because he is so young he will be around for a long time to come and will definitely be one of the best wrestlers in the world one day.

Speaking of the best in the world, I would now like to point out what I have been saying for the last few years and that is pound for pound, arguably the best wrestler in the world is Harry Smith, son of the late, great Davey Boy Smith. And congratulations are in order as Harry has agreed verbally to go to the WWE when he finishes his commitments overseas. Not to OVW or Deep South but straight to the main roster.

I have said for years that Harry would be there eventually and it was kind of a given, especially taking into consideration his family history and lineage. But at 6-foot-5 and 250-260 pounds, he’s got the look and ability to be world champ sooner rather than later. Cripes he makes me sick. LOL. As far as I’m concerned, I am hoping he ends up on the Smackdown roster so that he can take some of the swagger out of another third generation star that has got a terrible attitude. That to me is a feud that has money written all over it!

And I am hoping Harry won’t be going in alone, I hope T.J. Wilson won’t be far behind him. T.J. is another product of the Dungeon in Calgary, and definitely what you would call a student of the game and consummate professional. T.J. and Harry ran for a while as the Stampede Bulldogs and were one or the top indy tag teams in North America. If you have access to, or can get tapes of, their stuff I highly recommend it. It’s kind of disappointing in a way too, only in that I won’t be able to work with them again before they go and are signed. Ahh well. All the best to them both and congratulations.

I am excited as all get out to be back in the ring and working shows again, Even if it is with 260 pound meat bags who don’t realize how terrible they are! I am really looking forward to the upcoming World X Cup and testing myself against some of the best in the world. Specifically Team Japan. Why you ask? Because I have heard that Jushin “Thunder” Liger will be on Team Japan this time and he has always been one of my favorite workers ever. It will be an honour to be able to work with him and the rest of Team Japan as I love and respect their style of work.

This World X Cup promises to be the best yet with the talent I have heard are coming in. Anyone who complains that this worker or that worker was left out are the type of people that complain when they get lobster dinners instead of filet mignon! I mean really, unfortunately, TNA cannot fit in every “it” worker from an area or internet darling but do we really need to say that the whole X Cup is ruined because so and so couldn’t make it? Ahh well, if they don’t like it they can always start their own promotion and bring in whomever they like to cheer for. I, for one, will be kicking people’s teeth down their throats with glee! Cause I don’t care who else is in the ring with me, I have a lot ot prove and a lot of aggression to get out!

Support your local indys and watch out of me on TNA soon. Time for some Devine Retribution! And if you don’t like it! Learn to love it! Cause I’m Canadian! And proud of it!