When John Cena broke onto the scene about four years ago, I didn’t think the guy would last one month with that hand-me-down rap gimmick. It’s true. It’s damn true. Every time he’d rhyme into a microphone, I kept getting nightmarish deja vus of those goofs Men On A Mission or even better, that twit PN News playing in my head. Excedrin headache Number Five? You got that right.

At the time, a close “hardcore” SLAM! Wrestling bud said I was out to lunch. According to him, Cena had skills, was in it for the long haul and that I needed a couple of stiff chairshots to knock some sense into my useless skull. 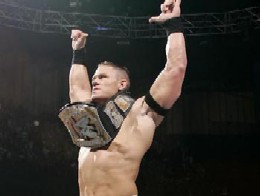 You know what? He was right. Months passed and as I saw John Cena grow as a talent with more and more airtime, I began to respect him because unlike the rapper wannabes before him, Cena was the real deal in the ring and that’s what mattered the most in my book.

Cena rode that wave of popularity to become the WWE champ then about four to six months ago the fickle WWE wrestling fans began to turn on him. I wasn’t surprised. I have been watching wrestling 30 years. I have seen this happen many times before. Cena started playing up to the female portion of his fan base. Throwing his shirts out to the audience and all that jazz. That kind of showboating ticks off the male fans. And let’s face it, the wrestling fanbase is still predominantly male and they don’t like pretty boys who concentrate on getting themselves over with the ladies. Just ask Shawn Michaels.

Cena was getting too cutesy with his moves too. Like that Five Knuckle Shuffle crap and the pumping up of his runners. You begin pulling that superficial stuff all the blasted time and just like The Rock, you will sink like a stone when it comes to garnering the respect of the fans. You become a one-trick pony and too predictable. You become a gimmick and not a talent. Just ask the useless Boogeyman.

Because of his actions, Cena brought the backlash all on himself to a certain degree. He deserved to the feel the fallout. The way in which the WWE chose to tell the Triple H – Cena story at WrestleMania 22 didn’t help matters much though. By constantly making references to Cena as a poor technical wrestler, they fanned the flames. Like dressing up Triple H as laughable reject from a Conan film, it wasn’t the smartest decision on their part. Cena needs to thank Jim Ross for referring to his wrestling style as “unorthodox” on the broadcast. With that, Ross proved once again why he is the best at what he does. He respects the talent enough to use his commentary to smooth over misconceptions that arise outside of the ring and any blemishes inside the ring. When J.R. is on the mike, you know damn well he’s got your back and little touches like that is what elevates him above the rest and always will.

Things though, have gone way overboard as far as Cena is concerned. Everybody is jumping on the anti-Cena bandwagon. Not content with putting him in his place, some want to crucify the guy and paint him as some sort of Kevin Nash-like joke of a wrestler. That is just plain wrong on so many levels.

Fans have the right to cheer and heckle whomever they wish. That’s the beauty of pro-wrestling. It is a truly interactive form of entertainment. That doesn’t mean the opinions they are expressing are the correct though. In the case of John Cena, the haters are way off base.

As I have discovered, there are many ways to rate someone as a “good” wrestler. Some like Rey Mysterio Jr. and Chris Benoit have the technical know-how. Some like Ric Flair have the charisma. In John Cena’s case, it is the passion he has for the business. Sure, he isn’t the most technical guy in the lockeroom but neither were The Rock, Sting or Steve Austin. Cena has a lot in common with those three men for like them, what he lacks in technical skill he makes up for in his pure, unbridled passion for what he does for a living. Some are content to sleepwalk through promos and matches. Not Cena. Like Sting, The Rock and Austin, he really does give his all when those cameras start rolling. He works hard, he works well and most importantly, he plays ball with the company even if the booking or scripting at the time isn’t flattering when it comes to his persona. He doesn’t appear to let his ego get the best of him.

Although he doesn’t have his charisma, Cena is like Sting in so many ways in the fact that whether he is facing Triple H or a member of the Spirit Squad, he doesn’t adjust the energy or the interest he puts into a match. He is full throttle all the time no matter whom he is teamed with and that is a quality that should be applauded not mocked as not every wrestler takes that approach. Cena needs to cut the cute stuff and get back to the rough and tumble street smart persona that brought him to the dance in the first place.

There are so many other worthy targets in the WWE of the scorn fans are showing Cena. Their negative energy is so misplaced. If you are gonna call out the underdeveloped talent in a federation that has such superstars as The Big Show, the Boogeyman, Mark Henry, Rob Conway, a cheap motel full of useless WWE Divas and a family who has done as much good as harm to the wrestling business as a whole, it only seems fair to dispense the hate fairly and equally.