Appearing on iconic Canadian shows like Wayne and Shuster, SCTV and Seeing Things had a way of getting Lou Pitoscia noticed in a way that a pro wrestling career never could.

Hard to believe that anyone weighing 285 pounds, with a 60-inch chest, 48-inch waist and 19.5-inch collar could ever have trouble being noticed, but it’s true. 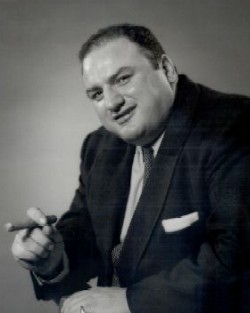 Born November 11, 1928, in Toronto, to Italian immigrant parents, Pitoscia was a rough kid and a wrestling career was hardly a stretch for the troublemaker. He learned his amateur stylings at Toronto’s West End YMCA. But Pitoscia was never much of a name in the ring. (“You newspaper guys are always spelling my name wrong,” he once told legendary Canadian sports scribe Jim Proudfoot. “It’s P-I-T-O-S-C-I-A. It ain’t Pistaschio like you’re always writing. That’s a nut.”)

He worked the occasional Maple Leaf Gardens show in the 1940s, but never made anyone’s top 10 list as a grappler. Pitoscia did, however, manage to make it into the Parkhurst 1954-55 wrestling card set as card number 25.

“His first appearance at the Gardens was in a post-match schmozz in the main event between Hans Hermann and Bobo Brazil in April 1952,” explained Gary Will of Toronto Wrestling History. “That happened a few times, where he’d just be one of the guys who ran-in from the back but not wrestle on the card.”

All told, his wrestling career was about a dozen years. Will has just five actual matches documented for Pitoscia at MLG: a draw in the opening match of a May 1952 show, two more opening matches, a handicap match loss (he and a partner lost to Tex McKenzie), and a loss to Sky-Hi Lee in his final appearance in May 1956.

In July 1958, Pitoscia made his Gardens debut as a referee, and worked occasionally in that capacity for years. He later worked as “Big Lou,” a cigar-chomping manager of the likes of the Kelly Twins in the 1970s.

Mike Kelly recalled Pitoscia as being a “real nice guy.” As the manager of Mike and his identical twin brother Pat, Pitoscia portrayed a “Mafia-type,” said Kelly, recalling how it came about. “We were doing commercials this one time, and he got talking to us. He said, ‘I’d like to do something with you guys.’ I thought nothing of it. He must have talked to the Tunneys, and we got hooked up.”

But during his peak time in the squared circle, he met and befriended Mike Mazurki, the godfather of wrestlers-turned-actors. Mazurki invited Pitoscia to Los Angeles in 1951, and scored the big Torontonian a very small part in My Favorite Spy, which starred Bob Hope and Hedy Lamarr. The acting bug bit.

“I was sort of a hood in it. I got killed,” Pitoscia told Proudfoot in 1960. “Anyhow the experience gave me confidence in my hidden talents, see.” 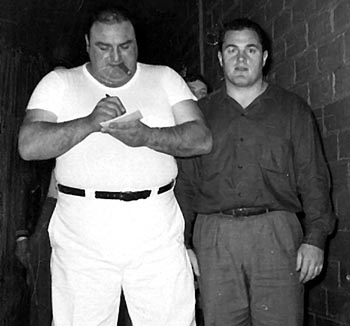 In 1953, Toronto wrestling promoter Frank Tunney helped him hook up with a local stage show, run by producer-writer Leo Orentstein. “He took to it naturally,” said Orentstein in a 1959 Toronto Star article.

Though he’d spend a good part of his acting years as a heavy or mobster — with his trademark cigar in his mouth — it was on the Canadian institution of Wayne and Shuster (1957-1990) that he shone. Pitoscia would impersonate everything from a football player to a drug dealer to a slave to a whisky salesman to a kung fu champion to the leader singer in an all-female band.

Reggie Love (Johnny Evans) was another wrestler-turned-actor. He said Pitoscia was a “nice guy, but any great actor or anything. … He was more of a heavyweight thug. You could hardly miss the guy.”

On the boob tube, he was in numerous commercials and TV movies, as well as Adderly, Robocop, SCTV Network 90, and numerous episodes of Seeing Things. He even made appearances across the border in the U.S., including The Ed Sullivan Show, where he was knocked through a brick wall. (“Out of my pay, they took 53 bucks tax. Fifty-three bucks they charge to let you fall through a crumby wall,” he told Proudfoot.)

In 1975, Pitoscia was in a serious car crash in northern Toronto, which turned into an inferno when the gas tanks of the two cars exploded. The 47-year-old Pitoscia ended up in the intensive care united with head and chest injuries.

During the years, Pitoscia would also help out at the family-run banana business. He was married to Jill for almost 30 years, and the couple never had any children.

On July 28, 2005, Pitoscia died in Toronto at age 76. He was buried with a fresh cigar in his hands, survived by his brother James, sister Lucy Piccininni and numerous nieces and nephews.