A doctor once explained that every fall in a wrestling ring is like “getting rear-ended by a car traveling at 20 mph.” Frank “Earl” Black, the Australian who toured the world as a pro wrestler from 1966 to 1973, begs to differ. “Forget that,” said Black, “it feels like 60 mph!” Indeed, here is a man qualified to give judgement, for pro wrestling injuries would almost cripple him at only 27 years of age. 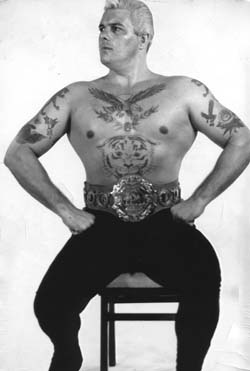 Before his in-ring career began in 1966, Black had a difficult upbringing. His father died in 1945 when he was only two years old, leaving his mother alone with eight children. The family quickly separated in order to gain work, and by the time he was 13, already standing 6-feet tall, he joined the merchant navy.

“When I was 15 I tried to become a boxer,” Black told SLAM! Wrestling, “but since I qualified as a heavyweight, they put me in the ring with more experienced heavyweights who could really hit. I eventually went back to sea, but then badly injured my knee.” Several months later, in an attempt to rehab his knee, Black worked vigorously in the gym, and caught the attention of other gym-goers. “Some of the wrestlers there had previously tried to recruit my brother, and when they saw that I was young and strong, they wanted me too.”

By 1965, Black was putting his muscular frame to good use in training with future promoter Steve Rickard, and Joe Komene. It wasn’t long before he had his first match, in Wellington, New Zealand, with Komene, and completed tours of the region for Al Hobman’s promotion. He soon returned to his homeland to work for Hal Morgan, before being invited to take part in what was known as the “World Series of Wrestling.”

“I was originally part of the world team, but the German team lost a man through injury, so I joined the Germans for the ‘Germany vs The World’ Tournaments,” he explained. “We went on six-week tours. Next was the ‘Far East’ championship tournament, which I won. Other series included ‘Japan vs The World’ and ‘India vs The World’. I wrestled against Antonio Inoki and Giant Baba in the Japan series.”

Impressed with his strength and technique, the Japanese wanted to acquire Black’s services on a permanent basis. After briefly moving to England, Black did compete in Japan, for Isao Yoshiwara’s IWE, although he never quite adapted to the Japanese lifestyle. “I hated Japan, especially the food. I would eat steaks that were brought in from Australia. I was lucky to know two air hostesses who looked after me.” Other foreign wrestlers who competed in the area were Bob “Blackjack Mulligan” Windham, Terry and Dory Funk Jr., Larry Hennig and Gene Kiniski. The latter was similarly impressed with Black’s work ethic, and invited him to work in Vancouver for the All-Star promotion. 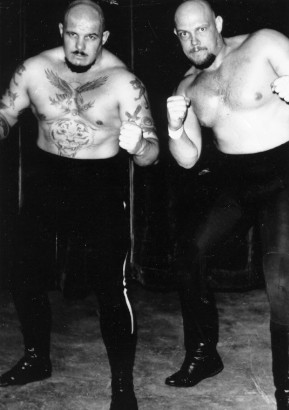 But it was at this pivotal point that Black began to experience growing difficulties with his back. “When I was in Australia with Hal Morgan, we worked in a boxing ring, which was basically a steel frame with boards on it. Morgan promoted boxing as well and didn’t bother using a separate ring for wrestling. At that time I injured a disc in my spine, but carried on. Now, in Vancouver, it was coming back to haunt me, taking those big bumps.” In his own words, Black was able to “struggle on” with the help of chiropractors and masseurs, before Stu Hart offered him the opportunity to work in Calgary for the legendary Stampede promotion.

“Earl Black used a seaman’s gimmick with us in Stampede,” recalled Bruce Hart. “He was very powerful and had tattoos all over his body, which made the gimmick even more believable. He was a good hand, and an effective, solid heel. I think of him as very similar to Duke Meyers, who we had here in the late ’70s and early ’80s.”

Upon his entrance into Stampede, Black formed a tandem with Kurt von Hess (Bill Terry). It was here that he had his greatest matches, against the likes of “Cowboy” Dan Kroffat and Bill Cody.

“I had a great time in Calgary, and I got to wrestle some long tag team matches, which I enjoyed. It was also great experience for me,” Black said. “After Von Hess injured his knee, I tagged with Joe Tomasso. Unfortunately he wasn’t nearly as good as Von Hess, nor Karl Von Schotz (John Anson) who I’d have preferred as a partner. Anyway, I would give a technical show with guys like Kroffat and then tag in Tomasso to work the crowd up with some villainy.”

Despite his preference for his work with von Hess, it was Black and Tomasso who won the International Tag Team Title, winning a tournament in July 1971. Their first reign came to an end one month later, at the hands of perennial nemesis Kroffat and partner Cody, although Black and Tomasso did regain the titles, only to then come up short against Danny Babitch and Michel Martel (Rick Martel’s older brother) in October 1971. “I was glad to have won the tag team belts. If nothing else, they gave you a little more notoriety and promoters would be more keen to use you, especially as a former Stampede champion.” 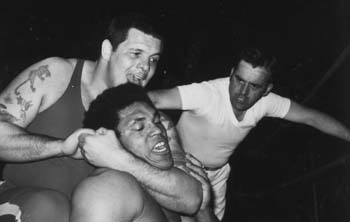 Earl Black has a headlock on John Elton.

The weather in Calgary was a little different than it was in Australia. “I remember wrestling Les Thornton at Banff one winter,” he said. “It was about 90 below. The ring had a plastic mat, so I bodyslammed him about 50 times to that I would not have to touch it, as the guy in the match before had worked up a sweat in the dressing room and stuck to the mat.”

Continuing his rather nomadic existence, Black moved to Kansas City in 1972 to work for Bob Geigel and Pat O’Connor. “Stu (Hart) asked me if I wanted to go. Pat O’Connor was a great shooter and a great guy, as was Bob Geigel. I particularly enjoyed working St. Louis, where the house shows were always packed out, with Harley Race as the top man. Probably the best worker I came up against there was Johnny Valentine, who was as tough as they come.”

Soon however, Florida came a calling, where he wrestled in the armoury, and in the sunshine. “The Brisco brothers were the top guys in the area and were excellent wrestlers. But they weren’t popular, as they always went at 100 mph, and in long, complicated matches Eddie Graham was promoting, and I think he liked me because I had a match with his nephew, and made him look good.”

With his popularity with Graham, things were looking rosy for Black until his long-term back problems flared up again. “I was wrestling the ‘Indian Rubber Man’ Johnny Walker. He suplexed me, and the beam under the ring broke, which smashed two more discs in my back. I was thrown from the ring and realized that I couldn’t move. When the crowd noticed this, they started kicking me. The only person to come to my rescue was Doug ‘The Professional’ Gilbert’s wife (Kay Noble). She was also a wrestler, and knocked out four guys before dragging me to safety.” 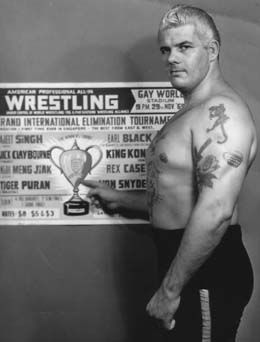 Earl Black with a poster promoting a show in Singapore in 1969.

At this point, with three serious back injuries behind him, it seemed likely that this was the end of Earl Black, professional wrestler. But after some recuperation and much-needed time off, he returned to Montreal to tag with his old friend, Kurt Von Hess.

“Von Hess wrote to me and told me that there was work for Johnny Rougeau back in Montreal,” said Black. “So I stayed that winter, then went to Halifax, Nova Scotia and New Brunswick. I’ll never forget the time that Karl Von Schotz, who was a real psychopath, hijacked a car with the driver still in it, and drove straight home, literally through flowerbeds, walkways, and roundabouts! Canada could be pretty wild at the time.”

Von Schotz laughed at the memories of Earl Black, recalling especially the tiger tattoo on Black’s chest. “Earl Black was a sadist with a heart of gold,” said Von Schotz via email from his home in the Dominican Republic, recalling more than one incident with riled up fans.

At the age of 27, however, Black’s career came to a conclusion, his back simply unable to take any more. “My back was just blathered. I could hardly walk, and things were getting on top of me. The only hospital that would operate on me was in London, so I hoped I could go there, get fixed, and get back in the ring. But it didn’t turn out like that.”

Following his retirement, Black went into the plant hire business with his brothers, and also returned to Australia for three years to manage a hotel. Now, at 63, he is still remarkably active, keen on maintaining his strength by lifting weights and swimming regularly. “I don’t think of myself as an old man,” he said, “maybe not sixteen, but not much older!”

Still, after over 30 years of being out of the business, Black has fond memories of his time as a wrestler. “I wish that I could do it all again, and I wouldn’t change a thing. Even now, I get emails from all over the world. It is nice to be remembered.”