Remember back to the days when there was a cemented effort to uphold the illusion that wrestling is real? No doubt some long time wrestling fans wish it was still that way, a time when you wondered, however slight, that maybe those wrestlers are really fighting it out. 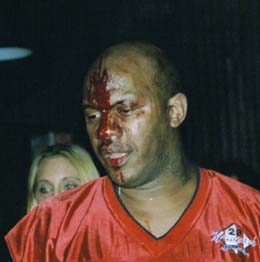 Let’s face it, those days are gone. But there still remains one man in professional wrestling who can instill that aura of unpredictability, that gut sensation that whatever he does in a match, it will in fact be all too violent, all too real.

His name is New Jack and he is the focus of the new Michael Moody produced film New Jack: Hardcore.

“Everyone who watched 101 Reasons Not to be a Pro Wrestler loved watching New Jack,” said Moody in an interview with SLAM! Wrestling. “They loved what he said; his personality and everybody said he stole the show. So I wanted to make a DVD just about him, his character, his career and his life. The result is amazing; it’s probably the best DVD I’ve ever made.”

Some would say that it was easy for New Jack (real name Jerome Young) to steal the show in 101 Reasons. Other interviewees, such as Chyna, Diamond Dallas Page, Sean O’Haire and Rikishi, were subdued at best in the face of the double barrel blasts of vulgarity and hilarity from New Jack.

As colorful as he may be on the mic, it’s what New Jack is in the ring that has engraved him into the annals of wrestling history, tradition be damned. From his array of improvised weapons that includes guitars, staple guns and vacuum cleaners, to his death-defying scaffold and balcony dives, New Jack is an anti-establishment entity that strikes a chord with those fans who demand his brand of mayhem.

“I’ve known New Jack for three-four years,” told Moody, explaining that as early as the filming of 101 Reasons, efforts were taken to begin compiling interview footage for a separate film on New Jack.

“I had this planned out awhile ago. When we flew him out to do the documentary, I offered him separate interviews with him for 101 Reasons. It was just a matter of convenience and here we are today, with the footage that he was really flown to be a part of. I have a collection of footage that I’ve shot of him over the past five years and that’s what this documentary is.”

The film takes on two streams of telling the tale of New Jack; in-ring antics and hilarious, profanity laced interviews that make him a lightening rod of controversy. But is it really all a gimmick, an act?

“His character on camera is pretty much what he’s like in person. He’s a pretty crazy guy –- even like innocent women that you’ll see in the stores, if they say something dumb, he’ll wise them up and say something that you shouldn’t probably say. He’s an aggressive guy,” said Moody.

“If you’re backstage with him and you piss him off before a match, and you’re wrestling him in a hardcore match, he’s going to injure you blatantly. You’re gonna get cut open, you’re gonna break something, you’re gonna go to the hospital and the police are probably going to be involved.”

New Jack’s landmark reputation for ultra-violent acts came during his days as a member of Extreme Championship Wrestling (ECW). It was during a tag team match, held in Massachusetts in 1996 that he bladed (cut open) 18-year-old wrestler Eric Kulas with an Exacto knife. According to reports, Kulas has asked New Jack to blade him in the match. The incision severed an artery, leaving Kulas unconscious in the ring as blood funneled from the wound. Kulas never wrestled again and his family would file a lawsuit against ECW that was eventually dismissed.

In recent years, two events, both of which are explored in the film, continue to bolster the volatile image of New Jack. In April of 2003 at NWA Main Event, New Jack wrestled against elderly grappler Gypsy Joe. The contest eventually digressed to the point where New Jack beat Joe with an aluminum bat wrapped in barb wire. In a shoot interview produced by RF Video, New Jack claimed that Joe was no-selling his offense, prompting the attack. The promoter of the event eventually came out and called off the match.

On October 9, 2004 in Jacksonville, Florida, New Jack would rise to a new level of infamy. In a match for Thunder Wrestling Federation, New Jack reportedly stabbed his opponent, William Jason Lane, 14 times. New Jack would eventually be charged with aggravated battery with a deadly weapon. Eventually, the charges were dropped, but not after New Jack spent time in jail from the initial arrest.

“That match is on the DVD,” Moody mentioned, along with an abundance of footage that attempts to draw an accurate picture as possible of who New Jack really is.

“He’s a nice guy if you’re friends with him, but if you don’t know him and if he’s sober or if he’s been drinking, and you say something stupid to him, he’s gonna let you know and make it confrontational.”

“The professional wrestling industry attracts not your typical personality. You’re going to get that one or two people that are totally out of control and don’t care about authority figures. They just want to do what they want to do. You’re going to have a wild personality like that, like New Jack, who’s an anti-establishment kind of person who doesn’t give a shit. I don’t think nobody knows for sure why he is the way he is.”

The violence and rebel attitude have no doubt played a role in isolating New Jack within the industry. Along with the numerous injuries that he will carry with him for the rest of his life, he also finds himself on the outside looking in when in comes to working for a mainstream company such as World Wrestling Entertainment (WWE).

“That’s probably why he’s not in the WWE is because he wants to be New Jack,” observed Moody.

“He doesn’t pull any punches; he’ll say whatever he wants to say. He never cared about anyone censoring him, he won’t let that happen. That’s why he’s not in that company.”

Away from the controversies, both in the ring and out, Moody did make an effort to engage personal friends and wrestlers (Sandman, Chris Hamrick, Vic Grimes) who gave their frank opinions about The Original Gangsta.

“There’s a lot of heavy respect there and that’s really all that I can,” said Moody.

“You’re either one of three things with New Jack; your either really cool, really good friends with him, your just a passing acquaintance, or your someone he totally dislikes and hates.” 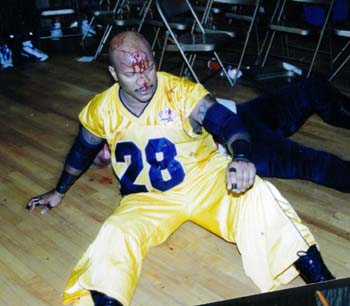 While choosing the path less traveled has come at a price for New Jack, it has also garnered him the mystique of the unknown that has vanished for the most part from professional wrestling according to Moody.

“I think there’s a certain level of entertainment value when you book New Jack on your show that you don’t get with some other wrestler. You’re not going to have that edge of your seat excitement where you’re wondering what’s going to happen. Even if you’re at a small indy show where there’s only a 100 people, it’s still going to be like ‘OK, something really f***ed up could happen right now because New Jack is here.'”

“He creates a level of believability that is missing from professional wrestling. Wrestling has become a joke in terms of believability and characters. It’s nice to have something that you can still think ‘Oh my God, was that real or not?’ That’s what makes him unique, that’s what makes him the most feared man in professional wrestling and that’s why he’ll always have a job.”