A long battle is over for me and I’m not talking about one of my violent hardcore matches! Recently, I got a phone call that I have been waiting for some time. A gentleman from the Ontario Human Rights Commission (OHRC) told me that I had finally won what is perhaps the most important fight of my career as a professional wrestler.

With that, it’s time for a history lesson. 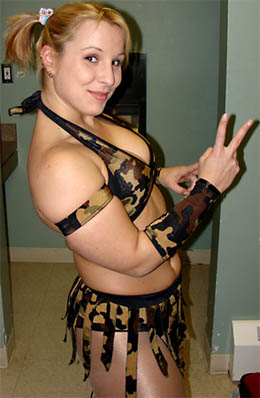 It was the weekend of Wrestlemania 22 and yours truly was scheduled to participate in a match for a promotion right in Toronto. The match would be a hardcore, inter-gender tag team bout and it was pretty exciting time for me back then. I was really getting a lot of bookings in Ontario and fans were really receptive to what I was doing in the ring.

But it all came to a crashing halt.

I got an e-mail from the promoter, telling me that he couldn’t book me anymore. Why you may ask? Turns out, some rival promoter in Toronto decided to file a complaint with the Ontario Athletic Commission (OAC). You see, in the province of Ontario, professional wrestling is actually regulated by the OAC, which is a branch of the Ministry of Consumer Affairs.

I didn’t know it at the time, but there was a clause in the act that oversees professional wrestling, stating that a man and woman may not come into contact in the ring. Yep, that’s right – in the year 2002 such a rule still existed on the books.

The commissioner, having no choice but to enforce the regulation as a result of the complaint, proceeded to contact the promoter and advise that that match I was scheduled to participate in could not happen.

To say I was slightly pissed off at that time would be an understatement. I was really upset. The simple fact that there was a regulation that basically said I couldn’t do what I love to do because I’m a girl really got me down. I know some people out there don’t like the idea of girls wrestling guys in the ring and I do respect those views. But this regulation was simply wrong!

What could a girl do?

The fact is, lots of people in the wrestling business (in Ontario) love to complain about the OAC. Granted, I have my own opinion about whether wrestling should be regulated or not, but the fact is, the regulation in question was there and bitching about it on message boards was not going to get that rule off the books.

After consulting with some close friends of mine, I proceeded to file a complaint with the OHRC. This was the only route I could take if I wanted to fight the government.

From the first moment I spoke with a representative at the OHRC, I received nothing but unconditional support for my cause. They saw what I saw, that the regulation in question was a violation of my human rights, based on my gender. I filled out the necessary paperwork and it was time to take down that regulation.

I realized early on that this would not happen quickly. Change comes slowly in government and I had to be patient. Fortunately, I had lots of support from my fellow workers, promoters and friends in general. They really helped keep my spirit up when I thought that I would never see the light at the end of the tunnel as it were.

For a while, it seemed like there was going to be a showdown with the OAC in Toronto in the form of a hearing, but it never happened. I can only guess why; maybe the OAC realized they didn’t have a chance when it came to defending such a regulation.

From there, I stayed in contact with the OHRC as they pursued the complaint for me. In the end, it came down to just one phone call. I was told that the OAC would proceed with removing the regulation once and for all.

The fight was over and I won!

Words can’t describe how great it feels. To be blunt, this was my fight and I was very passionate about doing it my way. I did my homework, plotted a battle strategy and executed the plan. Mission accomplished!

For the record, I want to make it abundantly clear that in no way do I harbor any ill feelings towards the OAC or the commissioner, Ken Hayashi. I realize that back then, he was just doing his job, which is to enforce the rules and action complaints that his office receives.

For now, I’m just waiting to see when the rule will be officially removed for good. I must say, there is a part of me that is glad I went through this. I learned a lot about myself and what I can achieve when I put my mind to something that I feel passionate about.

For those of you out there who may think you can’t win against the government, think again. It’s not easy and it will take time, even some of your own hard-earned money. But if you truly believe in your cause, then charge forth and fight the good fight.

To all who supported me, you will always have a special place in my heart. To all who said I couldn’t win, I thank you as well. You only gave me that much more motivation to keep fighting.

And yes, to the coward that called the OAC and filed the complaint against me, I want to thank you as well. You started this saga and I’m the one who finished it. It’s me who’s standing the ring of life with her arm held in the air as the winner and that’s something you’ll never be.

SLAM! Wrestling thanks LuFisto for permission to reprint this column, which was originally published on her website. For more back ground on LuFisto’s battled with the OAC, please read Mike Altamura’s article from 2003 entitled Inter-gender turmoil in Ontario.

LuFisto is based in Montreal and has wrestled all over Canada, the United States, Mexico and Japan. When not wrestling, she works full-time in the multi-media field. Visit her at www.lufisto.com.