TORONTO – Like fellow WWE diva Stacy Kiebler on Dancing With The Stars, Trish Stratus sees her gig hosting Canada’s Walk of Fame ceremonies as a stepping stone to other opportunities. Unlike Kiebler, however, Stratus isn’t ready to throw all the wrestling aside quite yet.

“I think I will always be connected to the world of wrestling one way or another. It’s all that I know right now,” Stratus told the media after the Class of 2006 was announced for the Walk of Fame in downtown Toronto. “The thing about wrestling and challenges in my life is that it’s always presenting new challenges. There’s always new challengers, there’s always a new storyline to work over.”

When pressed by a fan earlier in the public portion of the morning’s press conference at the Paramount Theatre, Stratus was non-committal on any sort of timeframe that she would still be involved in wrestling. “You sound like Vince McMahon, with a contract and a pen,” she joked to the fan. “I absolutely love what I do.” 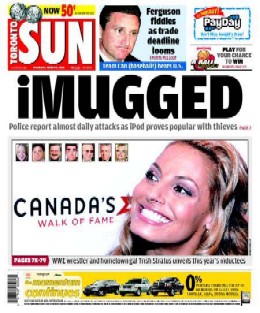 Trish Stratus on the cover of the March 9th edition of The Toronto Sun.

At the moment, Stratus’ WWE storyline has her focused on Mickie James. While Stratus wouldn’t guarantee a match for WrestleMania between the two grapplers for her WWE Women’s Championship, she hinted strongly. “I think Mickie James and I are seeing things a little differently as of late. People are after my belt.”

With the influx of new women into WWE via the Diva Search contest, Stratus admitted that the T & A content of the programming has been upped a bit. “I don’t know if that’s due to the talent that’s coming in and out at the moment.”

Now an absolute veteran of the women’s locker room with a whopping six years experience under her belt, the 30-year-old Stratus is concerned about the lack of training of some of the women she has been asked to face in the ring. “It’s more the safety thing, though. Recently Ashley got injured. She broke her leg in two places. That came from lack of training and probably stuff that she wasn’t exactly trained to do. So that’s my main concern, the safety issue. I think what’s important in wrestling is the development of our characters and our personalities. So when we can develop a character, it means more of a storyline, and it means more when we have the match. In that time, they can hopefully develop their wrestling skills as well.”

Stratus, speaking on International Women’s Day, is proud of the firm foothold the women’s division has at the moment. “In our industry, we’ve become part of the boys’ club. We used to be sort of the eye candy of the show. Now we’ve gone and become accomplished athletes in the ring. We’ve seen an increase in demographics from the women. We’ve seem more young girls watching and aspiring, not necessarily to be wrestlers, but that we’re women making it in a male-dominated world. We’re out there being athletic entertainers. They admire that, they look up to that.”

To some, having a professional wrestler host the 2006 Canada’s Walk of Fame ceremonies is strange. Past hosts have included Tom Green, Jann Arden and Kurt Browning. Stratus had fun with her reputation: “Some of you may know me from the picture your son has downloaded from the Internet.”

However, she vowed to bring a complete package to the June 3rd event at Toronto’s Hummingbird Centre. “I’m a Canadian personality, I’m homegrown, and I’m an international actor/entertainer. I think that all adds up to a neat package to present.” On stage Wednesday, dressed conservatively in a grey skirt and a black turtleneck and her hair pinned up, Stratus was confident while showing comedic elements to her personality.

Delivering Stratusfaction to a wrestling crowd isn’t all that different than delivering to any other audience, she explained. “I definitely get an energy from [the crowd]. I definitely feed off their energy. It’s the same. It’s a performance … I found that when I went and did Second City [comedy club], it was the same sort of thing. It was a new stage for me, but it was the same thing. You’re still going and trying to get a reaction from a crowd, and you’re performing in front of a crowd.”

She praised the loyalty of the WWE audience. About 150 hardy souls heeded the call for fans to arrive by 7:30 a.m. for a chance to see the press conference, and wait for an autograph from Stratus. “Anytime we venture out to try something new, they’re there to support us and it means a lot,” expressed Stratus, who was asked earlier about her singing debut on a WWE CD.

The former fitness model is not someone who takes herself too seriously. Her responses to media questions were often light and airy: “My first reaction when I heard I was hosting was, ‘What am I going to wear?’ because I’m a girl, and that’s what girls do.”

The eight inductees into Canada’s Walk of Fame are:

Stratus promised wardrobe changes during the gala, though warned fellow blonde bombshell Pamela Anderson (who is hosting the 2006 Juno Awards for Canadian music) that there could be trouble. “It depends who has the better dress.”