TORONTO – On Tuesday, nine names were announced as being inducted into Canada’s Walk of Fame. Unfortunately for wrestling fans, the name Stu Hart is not among the inductees despite an ambitious drive to add him.

“I am shocked and surprised to hear he wasn’t inducted considering the great response we got internationally,” said David Freitas, campaign director for A Star for Stu, shortly after the list was announced. “I am not sure what to make of it. We had 800 nominations from around the world just through our website, and I know more went directly to the nomination site.” 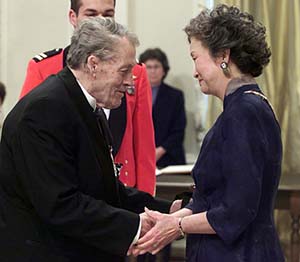 It has been a whirlwind since October 16th, 2004, the one year anniversary of Hart’s death and the launch of the campaign under Freitas. “What we organized was quite successful, but unfortunately the measurable result of him being on the walk isn’t there. Now we regroup and push ahead for 2006.”

“We pay attention to things like the Star for Stu campaign. We received a lot of nominations for Stu, we are tracking everything and doing the best we can. Lots of people were nominated who deserve to be on the walk, it is a tough choice to make. We have to look at it like this –- it isn’t a case of deciding not to induct Stu, but a decision to induct these people,” Heidi Pyper, Manager of Sponsorships, Communications and Special events for Canada’s Walk of Fame told SLAM! Wrestling. “There are literally hundreds of people who get nominated. Our list of inductees is really diverse and there is definitely room for wrestlers on there.”

Pyper feels Stu Hart will get his star in the future.

“Stu Hart is deserving, and wrestling is deserving as it is huge entertainment worldwide. Stu as well as people like ‘Whipper’ Billy Watson are deserving of a star. We are limited by numbers, we can only do a few inductees every year and we will see Stu Hart on that walk for sure someday, it is just a question of when.”

Hart’s son Ross, who was one of those who submitted a nomination, was disappointed to hear the news.

“I wouldn’t want to denigrate the choice of the others, they are all good choices. I don’t know what determined why my dad wasn’t chosen. He had quite a few nominations and people advocating that he be on the list. It would have been nice. I am happy for the ones who were chosen, it is quite an elite list. Stu in his own right has done so much as an athelete, a Canadian serving in the Second World War, multitalented in a number of sports and as an entrepreneur and father of a dozen kids. So many of his kids went on to be famous and successful, I think he would have been a good choice,” he said from his Calgary home.

Ross Hart was surprised and pleased when he heard of the independent campaign to have his father immortalized.

“I was very pleased and proud that he was so well thought of. It was gratifying, even after his passing. He has already achieved so much -– being named to the order of Canada, being in the Alberta Sports Hall of Fame and his biography,” said Ross. “I was pleased that he had such strong recommendations from Canadians young and old. He and his contributions to Canadian society hasn’t been forgotten. It is an honor that people nominated him for this prestigious award.”

When Hart’s name is added, it will be a proud moment for his family, an accolade in a list of many.

“It would be the icing on the cake and a nice compliment to the other recognitions he has received. To be placed among that elite list of famous politicians, singers, authors and athletes that makes up the Walk of Fame, Stu deserves to be among that list,” said Ross. “I would be very disappointed if they didn’t take a second look at him,” Hart concluded.

For Freitas, this is a slight setback but hardly a derailment.

“The original plan was to do this as a yearly campaign, getting Stu inducted the first year. There are so many other great Canadian wrestlers out there that deserve recognition, I thought it would be great to start with Stu and move on to those others. So now we take a different road than what we originally planned.”