Keibler excited about her figure

By JON WALDMAN and RUSS COHEN

NEW YORK – In their younger days, many girls grow up playing with Barbie dolls and dream that they will one day grow up to be a have a figure made in their image. One of those girls was WWE diva Stacy Keibler. 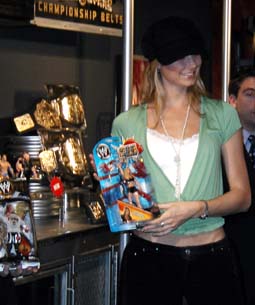 The long-legged Keibler was on hand at February’s Toy Fair at the Javits Center in New York to sign copies of her new figure from Jakks/Pacific.

“When I was little I was playing with Barbie dolls and did I ever think I would be an action figure? Never,” Keibler said at the event. “This is an honour, for me to have a doll.”

Keibler has been around wrestling for several years. She began her career as a member of World Championship Wrestling’s Nitro Girls dance team, but would quickly break out on her own as Ms. Hancock, a tightly-wound executive who had a wild side and a penchant for dancing. Keibler notes that she enjoyed her time with the former company. “I was new so everything was great and wonderful for me,” she said.

After WCW was bought by World Wrestling Entertainment, Keibler was one of the talents immediately brought into the fold. Along with fellow diva Torrie Wilson, Keibler became one of the most popular women who were new to WWE’s audience. Since her debut, she has held several different roles in WWE, including a stint as manager of the Dudley Boys. These days, she is mostly seen with Randy Orton in backstage vignettes on RAW.

Recently, WWE has had an influx of divas such as Christy Hemme, Joy Giovanni and Michelle McCool as a result of the $250,000 Raw Diva Search competition. While some would perceive such an expansion as being an invasion of their territory, Keibler is open to having the new women on the roster. “I am personally not bothered by it at all,” she said.