Nowhere did this Long Island native make that abundantly clear then this past December during the Total Nonstop Action (TNA) Turning Point pay per view, with his death-defying walk across the top of a steel cage. In doing so, Primetime has cemented himself into professional wrestling history, along the likes of Jimmy Snuka and Mick Foley.

“Actually, I’m surprised everybody remembered it,” said a modest Skipper in an exclusive interview with SLAM! Wrestling. “I guess from what everybody is saying, it’s supposed to be one of those memorable moments. Every interview I do, everybody wants to talk about it. Fans are still reminding of it, so I guess it’s a lot bigger than what I thought.”

Memorable is a word that fits what Skipper does in the ring, and fans will have a chance to see him steal the spotlight once again at the Destination X PPV this Sunday night. 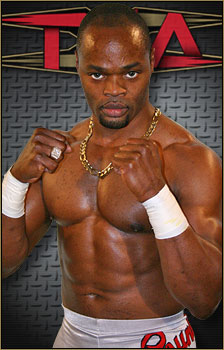 Although TNA has yet to confirm it, Skipper did state he will be a part of the Ultimate X match featuring four participants in total, three of whom are challenging X Division champion A.J. Styles.

“I won all my matches to qualify me to get into it, so I’m definitely going to be a part of it,” he said. “I can’t wait. It will start off as a tag (team), then it goes to a three-way, then the last two go one on one for the belt.”

This Friday night on the TNA Impact show, Chris Sabin and “The Fallen Angel” Christopher Daniels will compete for a spot in the Ultimate X contest. Daniels and Skipper are former tag partners from their days as Triple X, but were forced to disband after losing the six sides of steel cage bout at Turning Point.

Skipper teased the prospect of reuniting with Daniels once again. “If we have it our way, we’ll be tagging, even though we’re not suppose to. Everything will be in our favor, if we get together.”

But it is singles competition that Skipper is focused on, noting that he achieved all that he could in the tag team ranks with Daniels.

“My first goal is to get the X belt. After that, I want to go for the heavyweight belt,” Skipper said. “We accomplished every goal we had as a tag team, so now it’s time for both us to shine as single wrestlers. Chris can do it and I’m sure that’s one of his goals; to get the X belt.”

The hunger for championship gold is well entrenched in Skipper; a two time NWA-TNA tag team champion and a former co-holder of the World Championship Wrestling (WCW) cruiserweight tag team titles with Kid Romeo. He also held the WCW Cruiserweight championship title when it was given to him by Lance Storm during his tenure with Team Canada.

“I didn’t know nothing about Canada,” admitted Skipper. “During interviews, they would ask me the question and I would start to talk and Lance would always jump in and finish it.”

“Lance was great. His psychology for wrestling is great,” added Skipper. “He believed in his work ethic and training; all of the stuff that I was doing, he was doing. All I had to do was sit back and watch and learn from him. Any questions, I could always go and talk to him. Lance was a great person to work with.”

It was also during this time that Skipper adopted his catch line of ‘I built this house’, from former NFL great, “Neon” Deion Sanders.

“I got it all from him,” admitted Skipper. “In wrestling, every time you listen to a promo, everybody says they built this and they did so on and so forth. When I first started, I didn’t have nothing; nobody believed in me. So my attitude was this is my house and I’m taking over. Everybody was like ‘Hey, that’s Deion Sanders, do some more of him.’ So I just started studying his material.”

But none of those heights of notoriety can compare to participating for the first time in a PPV main event at Turning Point.

“Everybody else was doubtful whether we could do it or whether we can even prove to be a main event. We proved we could do anything we want. Let me tell you, it was great,” he said.

In fact, it was more than great. It was a movie-like career comeback for Skipper.

After the collapse of WCW in 2001, Skipper was signed by WWE and subsequently assigned to Les Thatcher’s Heartland Wrestling Association, then a WWE development territory. Nine months later, Skipper was released from his contract.

“When I was with WWE, I felt I never got the chance to show them what I could do. They said we need you train here (HWA) and once we figure out what we’re going to do with you guys, then you’ll be on TV in a matter of two months,” he said. “Then two months turned to seven months. They never gave us a chance and then they cut us.”

Facing a bleak future in a wrestling landscape devoid of serious, money-making opportunities, thoughts began to arise on whether or not he could continue pursuing a career in the ring. “I was like ‘Why am I doing this to myself?'” he said, with thoughts of returning to his previous occupation as a restaurant manager.

But stay he did, receiving a second chance at success from a former WCW roster member and Japanese wrestling legend, The Great Muta (real name Keiji Mutoh).

“He helped keep my dream alive,” recalled Skipper. “He always asked me if I didn’t work for WCW, would I ever want to wrestle over there. I always heard about Japan and I’d love to wrestle there. Lo and behold, when I was released from WWE, I gave him a call and he said if I was still interested I should come down.”

Skipper soon found himself touring regularly with Muta’s home promotion, All Japan Pro Wrestling (AJPW). Initially appearing in the ring as himself, he would eventually be assigned the masked gimmick, Extreme Blade.

“That was weird. You can count how many black people there are in Japan,” said Skipper, noting that his tenure under the mask did little to fool fans as to his true identity. “I was the only black guy with a mask. I’m sure the people knew based on the signature things I was doing in the ring. It was great over there and I had a lot of fun working for All Japan.”

With the launch of TNA in the summer of 2002, Skipper found himself being wooed by the upstart promotion, leaving him with the tough choice of leaving behind his AJPW commitments. “TNA said ‘Hey, you can’t do both. You need to either or because we want to do things with you and we can’t because you’re always traveling back and forth.’ I left All Japan on a good note, anytime I want to go back, the doors are open.”

With his return to the North American wrestling scene, Skipper picked up right where he left off, wowing audiences with his unique, daredevil style. But more importantly, he has endured adversity where others have not and rightfully earned his time in that elusive spotlight of fame.

“Win, lose or draw, I’m living my dream. I wouldn’t change anything.”