When the doors to the Eagles Hall in New Westminster, B.C., opened ten years ago, the people who filed in to watch something called ‘pro wrestling’ had no idea they were part of history. Back then, the stars of Extreme Canadian Championship Wrestling were just a bunch of strange-looking people with even stranger names. Wrestlers like Burgermeister, The Torch and “Gorgeous” Michelle Starr were not exactly commonplace sights on Columbia Street. 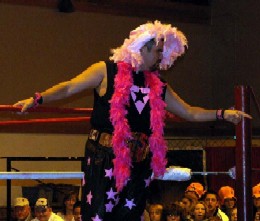 But now, a decade later, some of those who wrestled on the first shows for ECCW are set to be reunited in the promotion’s special 10th Anniversary Show, to be held Friday, January 27 at Bridgeview Hall in Surrey, British Columbia. For some of these wrestlers, it will be the first time they have set foot in a wrestling ring for many years. For others, it is simply the next chapter in a decade-long story of professional wrestling, a story they started in the prologue that was the very first ECCW show.

For ECCW owner Dave Republic, the 10th Anniversary show is surely a milestone, but one that he believes should perhaps never have happened. “The genesis of this show is that Michelle Starr and I are too stupid to shut our company down,” he said in a recent interview — it is hard to tell if he is joking. “The show is a celebration of the fact pro wrestling is alive and kicking in the Pacific Northwest. A hell of a lot of talent has come through our ring and our ropes in the past ten years and it’s really impressive who has been with us.”

“Alive and kicking” might be a bit of an understatement; for the first time in over a decade, independent wrestling is on TV for a weekly show, an accomplishment that eluded ECCW — and other local promotions — since they began. And all the signs are the there that ECCW’s glory days, once thought as of the days back in the Eagles Hall in 1996, are actually now the ones ahead in the immediate future.

The last TV taping, for example, held at the Russian Community Center in Vancouver, was standing-room only. “So obviously, we’re doing something right,” ECCW promoter Michelle Starr (Mark Vellios) said, adding that the 10th Anniversary is the culmination of the perseverance of a belief in the sport. “We’re still around only because of the determination of my partners and myself. We were always giving it another try.”

And that, Starr said, is the reason for the company’s longevity. The Pacific Northwest has been home to many wrestling promotions, most of which have since folded their tents. In the past year and a half, no fewer than four promotions have ceased to exist, including some who held their first show within that same timeframe.

“A problem with other promotions is they give up too quick,” Starr advised. “They put on a show but are not prepared to lose money. These shows don’t run for free — there is a financial investment involved. And some of these promoters can’t afford it. They lose $500 to $1,000 a night and that’s a big deal for them and they get scared and give up.”

Republic admits that becoming a financial juggernaut is probably not a good reason to get involved in running your own wrestling company. “It all depends what you are trying to get out of it,” he said. “Honestly, our goal has always been to be profitable and we have not exactly been successful at that. Where we have been successful is putting on solid shows where guys can train and move on and where we introduce new talent to the fans.”

Being an entertaining and innovative promotion has always been ECCW’s strong suit, Republic said. ECCW was one of the first promotions in Canada to showcase the skills of both Christopher Daniels and the American Dragon Bryan Danielson and to stage exciting match-ups like Steve Corino vs. Sabu. “Does that always translate into money in the bank?” Republic asked. “No it doesn’t, but it does translate into a sense of pride. Starr and I can look back as owners of ECCW and be proud. We could shut down tomorrow and we’d be very proud of what we accomplished.”

Terry Joe Silverspoon (John Parlett) is another man for whom the 10th Anniversary is special. Asked by Starr to help build ECCW into a successful wrestling company, Silverspoon invested a lot of his own time and money into the promotion and, with Starr, co-owned the House of Pain wrestling school in Langley until it closed two years ago. When that happened, Silverspoon felt the bitterness all those involved with pro wrestling inevitably feel and for him, it was a time of some pretty serious reflection.

“Everyone goes through difficult times,” Silverspoon said. “House numbers are down, money is going out faster than it is coming in — there are times you can get pretty bitter and depressed about the whole situation and you ask yourself, ‘what am I doing this for?’ But you get over those difficult times — and believe me, there were a lot of them — because there are also some great times and some absolutely spectacular matches that people will always remember and in the end, that answers that question.”

Now, after all the frustration, all the bitterness, all the hard work and determination, the stars of ECCW are set to be come local legends, thanks to the TV deal that puts their faces on television sets from Vancouver to Seattle every Saturday afternoon. But if the TV deal is the true benchmark of the promotion’s success, will the company have to change some of the things that got it this far?

Dave Republic doesn’t think so. He can remember back to his very first ECCW show a decade ago and believes the company’s philosophy can only take it farther. “I remember being very excited,” Republic recalled of the first show. “I just remember that I could not believe what these guys were doing in the ring and how the fans really took to the wrestlers and couldn’t believe I was part of something that exciting and ten years later, still am. For me, it’s always been about guys going out there and busting their asses to put on a show they can all be proud of and that’s something I think we’ve always done so well.” 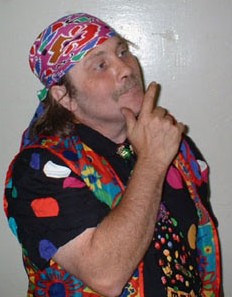 On January 27, they are set to do it again. Many of the old faces of ECCW like Randy Tyler and “Loverboy” Johnny Canuck will be there, as well as some of the newer blood. But perhaps the crown jewel of this 10th Anniversary show is the ECCW Alumni Battle Royal, where some of those who laced their boots up to wrestle for ECCW ten years ago will compete. Men like Moondog Chopps, Drunken Welfare man, Ladies Choice and others will return to the ring to relive the first few moments of a wrestling company that fought for its existence inside in a small building in New Westminster, B.C. And while the company — and the men and women that work for it — have come so far, there is still a long way to go.

“Our goal is to be loyal to the people who have been loyal to us for the past ten years,” Republic said. “This is our opportunity to say thank you to the guys that have stuck with us, the Scotty Macs, the Moondog Mansons and a host of others. And to thank the fans for building what we have. This anniversary show is just as much for them as it is for us.”

It will be an interesting night to be sure, and for Silverspoon and many others who have shed their blood, sweat and tears to make the wrestling company work, it will be a day of celebration, and perhaps, a little vindication. “There are those out there that have not always liked us and hoped ECCW would fail miserably,” Silverspoon recalled. “But guess what? We’re still here.”

ECCW’s 10th Anniversary is being held Friday, January 27th at the Bridgeview Hall in Surrey, British Columbia. Belltime is 8 p.m. Here’s the line-up: