There’s an international incident brewing between Canada and the United States. But rest assured it has nothing to do with softwood lumber.

The flash point will take place in Windsor, Ontario as Border City Wrestling (BCW) will host their International Incident 2 show on September 15, featuring what may very well be the largest contingent of wrestlers from Total Nonstop Action (TNA) to appear on an independent wrestling card.

“From top to bottom, I don’t know if there’s ever been a stronger show. It’s just so jammed,” said BCW owner Scott D’Amore in an interview with SLAM! Wrestling.

“This is a real event. This is really the first opportunity for people outside of Orlando and Nashville to get a real look at the TNA product up close and personal.”

Confirmed matches for the event reads like a TNA Pay Per View (PPV) and may very well rival the Warrior 1 Wrestling mega event, held in Oshawa in June, for independent wrestling event of the year in Canada.

“Having the NWA world title coming back to prominence with Raven and Jeff Jarrett here in Windsor, unbelievable — what a great coup for Border City Wrestling,” said D’Amore. According to research done by D’Amore, the last time the NWA title was defended in Windsor was December 17, 1964, when champion Lou Thesz downed challenger Emile Dupre.

If those two scheduled bouts are not enough to make area wrestling fans drool with delight, there will also be a five-match Canada Cup tournament, with the theme being Team Canada versus Team USA. Tourney matches will include BCW Heavyweight champion Bobby Roode facing off against the monster Abyss, BCW TV champion Petey Williams will take on Jerry Lynn, A1 versus Rhino and Johnny Devine & Eric Young squaring off against America’s Most Wanted. There will also be a six-man tag team bout to round out the tournament itinerary, along with other matches featuring BCW grapplers.

With a line-up that D’Amore has built for this event; expectations are high for an above average draw to the event, outshining the usual attendance the promotion draws for their monthly events.

“I think you’re going to see fans come from Michigan, Ohio, Toronto, Hamilton, you may even have some make the trip from Chicago,” D’Amore said. “Every Border City Wrestling event when we run one of our large events in Windsor, we always get a good cross section of fans. At our last event we ran in July, which had the Hart Foundation reunion, we got fans from every Canadian province, twelve different (U.S.) states, England, Ireland and Scotland. We even had fans from Australia make the trip. Some of that is a testament to Bret Hart and what a huge star he is and how beloved he is. But the other testament is the fact that fans around the world are starting to learn that when it’s got the Border City Wrestling brand on it, you’re going to see great action.” 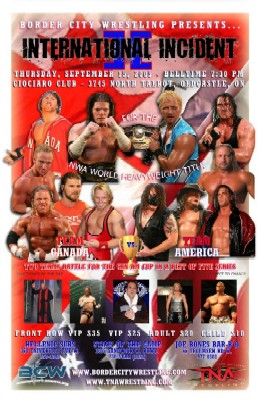 But there is more at stake here than setting a high attendance figure. With the sheer number of marquee talent on board for the show, and TNA soon to be airing regularly on Spike TV come October 1st, observers cannot help but speculate if this will be a test run for future TNA house shows.

“Absolutely,” confirmed D’Amore bluntly on the topic. “I’m not going to lie, not going to keep it a secret. Really what you’re seeing here is a test run on how a TNA house show would run. You got all of the top TNA talent there — yeah, it’s a barometer. I don’t think that we could insult people by saying anything else. It’s a good opportunity to see how you run a live event. This is a way to say ‘Here, this is the model we can take on the road.'”

With less than a month away from their debut on Spike, D’Amore is counting on his fellow Canadians and their appetite for wrestling to make their presence known by taking in the TNA product en masse.

“All the rules change come October 1st — coast to coast you’ll be able to see TNA wrestling every Saturday night as a part of Slamming Saturday Nights on Spike TV. We all know Canadian wrestling fans are more loyal, more rabid, more all around informed than American wrestling fans on a lot of levels. When the business dips in the U.S., it still stays high in Canada because Canada is such a loyal wrestling area.”

There can be no dispute that within the borders of Ontario, BCW has earned the symbolic privilege to host such a massive event, as the promotion now enters its twelfth year of operation, far outdistancing any provincial rivals.

“In those twelve years, it didn’t succeed and flourish because of Scott D’Amore,” D’amore reflected. “It survived because of all the great people involved. From Chuck Fader, who was the guy out there hustling all the promotional end of things in the early years who’s now back on board with us, to Jeffery Scott who’s our senior official, ring announcer, art designer, to all the great volunteers we have — the local guys that go out there and make sure the posters get up in all the right places around town. Border City Wrestling has done some great things and that’s because we have great people that are all working for the common good.”

It’s no secret that D’Amore now holds an active position on the TNA booking committee and while that does take up a significant amount of his time, he remains with BCW when time permits.

“How hard is it for Border City Wrestling to operate without me? Not hard at all,” told D’Amore, again, noting that the promotion almost runs itself by those involved in Windsor. “The hardest thing for me is the fact that I miss being as deeply involved as I would like. I’m still there, I still get updated, but I miss being in the trenches with the people. But hey, my involvement with both companies is part of what help make this event possible. Border City Wrestling will go on, with or without Scott D’Amore.”

Tickets for International Incident 2 can be purchased now at the BCW website. The event will be held at the Ciociaro Club of Windsor, bell time is 7:30 pm.