Joe E Legend has a lot to say 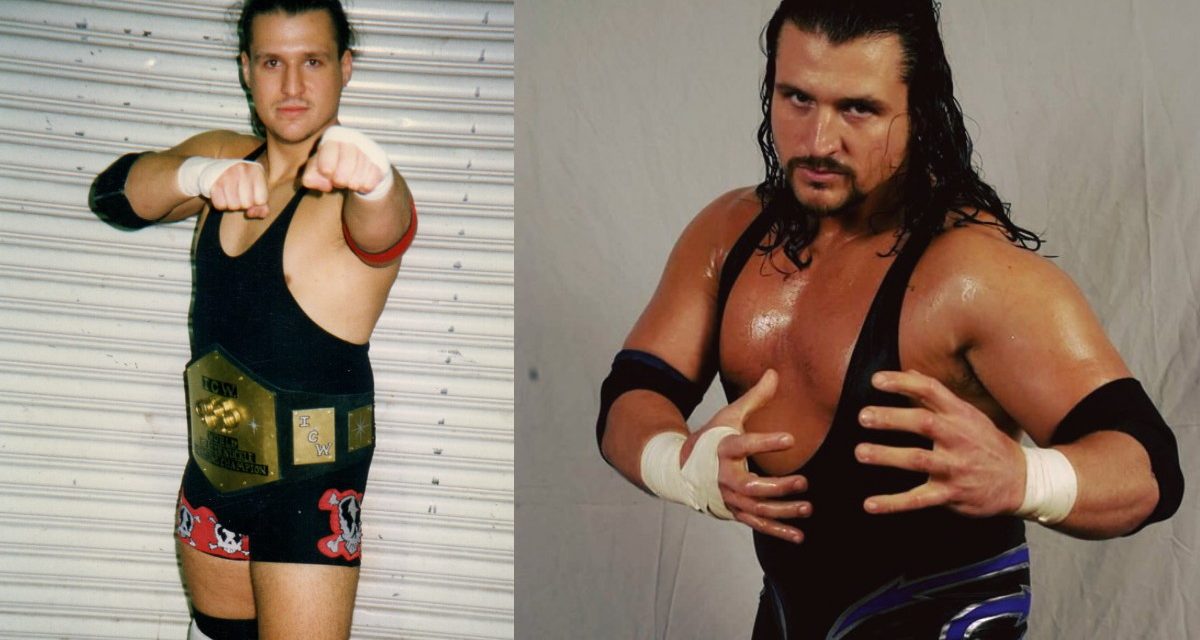 CONCORD, ON – They say legends never die. Whether or not you think Joe E Legend is a legend of professional wrestling, there is no disputing that he has certainly proven there is life after World Wrestling Entertainment (WWE).

The last time SLAM! Wrestling spoke with the Toronto native it was January 2000 and an anxious Legend (real name Joe Hitchen) was waiting for his work visa to clear so he could start working for what was then the World Wrestling Federation (WWF). Professional wrestling was riding a huge wave of popularity and Legend was all too ready to get on board. 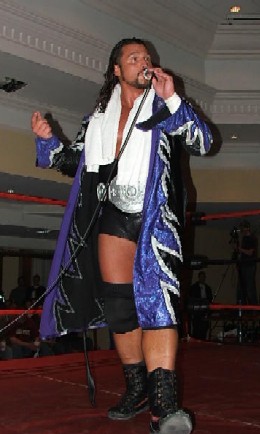 Joe E Legend tells it like it is during the Pro Wrestling LIVE! Show in Concord, ON in May. Photo by Corey David Lacroix

He would in fact make it to the WWF ring, assuming the persona of Just Joe, a rumor mongering instigator who was all too willing to advise wrestlers on a variety of hearsay. It may have seemed like a ripe character for someone like Legend who was more than comfortable talking on the microphone. But ask Legend what he thinks of the character and he will give you a blunt answer.

“I hated the Just Joe gimmick,” said Legend in an interview with SLAM! Wrestling. “It was designed to fail and had no future whatsoever. Initially, it looked like something that would tie in with the Acolytes, but in the end I was used to get the Kurt (Angle)-Hunter (Hearst Helmsley) angle off the ground and they had no plans for me after that.”

As it would turn out, Legend would become the victim of the infamous creativity team of the WWE, a group that many of the most recently released wrestlers from the company have directly named as the culprits for the deterioration of the company’s product.

“One of the main problems was with a writer named Jamie something. He was an idiot who could only further other angles but had no clue of any kind otherwise. I confronted him several times about the fact that he was totally burying me with the way I was being written and he would just tell me not to worry, he would think of something. This bonehead thought of nothing for anyone and usually let the talent write their own material and then would kiss their asses telling them how wonderful they were — this guy offered nothing and should have never have had a job.”

Early 2001 saw Legend part ways with WWE, leaving behind a brief but agonizing period of his wrestling career.

“I hated my time with the WWE. I loved the money while I was there, I loved the travel while I was there, but beyond that, I hated it. I thought it was very snakey, very backstabbing — when you see these interviews and these guys are going on ‘Oh it’s such a family atmosphere, it’s my dream job.’ Most of them hate it, most of them, when you talk to them with the camera and microphone off, are not happy and I can’t blame them.”

One particular active member of WWE that Legend had bold words for was John Layfield Bradshaw. “Truthfully, I have no use for a guy like Bradshaw. I think he’s a snake and a politician. He’s cost more people jobs that he had no business having any control over. I know he snaked me out over nothing.”

With that chapter closed, Legend set out on his own, working for a wide selection of promotions across North America and around the world. He would resurface on the mainstream radar with Total Nonstop Action (TNA) in the summer of 2003.

“I did the WWA tour (World Wrestling All-Stars promotion run by Andrew McManus) and that’s where Jeff (Jarrett) first saw me and asked me to come work for him. Ultimately I agreed to,” recalled Legend

But according to Legend, his tenure with the company would turn into another period of aggravation. “I went out, I cut a promo, it got over like crazy — I had the crowd exactly where I wanted them. Afterwards they came to me ‘Don’t do that anymore.’ I go out there and do a decent move, ‘Don’t do that anymore. We want you to punch and kick.'”

Legend placed the blame squarely on the shoulders of both Jarrett and former Puerto Rico booker Dutch Mantell, who was brought into TNA in 2003.

“He (Mantell) knows how to book Puerto Rico, but he’s always been a regional guy. He’s never been big in a major league promotion. Anytime you go to do anything of any significance, he cut you off at the knees,” Legend stated.

“Jeff didn’t want me doing anything. I was becoming pretty strong, so he cut my legs out from under me at every turn. He was an absolute, total snake, and I wish nothing but bad things on him.”

While in TNA, he briefly held the NWA tag team championship titles, alongside Kevin Northcutt. They would lose the titles to the team of AJ Styles and Abyss in February 2004. Legend would part ways with the company that same month.

Later that year he would move to Germany where he now resides with his wife and remains active with various promotions in Europe.

“It takes more effort on my part to keep my career going than it would be for a guy getting his envelope every week. I enjoy the freedom of it more, maybe I’m just more from the Bruiser Brody era where you can pick-up and go when you want and setup in the territory you want.”

That brand of individuality is in keeping with the kind of person Legend is, who by his own admission is not one to tow the line of the ever-precarious backstage wrestling political scene.

Not that long ago, WWE delved into the realm of reality TV via the Tough Enough series on MTV. Not to be out done, Legend also made his mark in that unique genre of television in the Celebrity Wrestling show based in the United Kingdom on ITV. It was in fact his affiliation with the British wrestling promotion Frontier Wrestling Alliance that got Joe’s foot in the door.

“The head guy there, Alex Shane, he mentioned to me in a phone call that there was a show coming up and would I be interested because they wanted a foreigner, someone without a British accent. He didn’t give me all the details and I said ‘Ya, sure, put my name in the hat’,” explained Legend.

In December of 2004, Legend would get his chance to try out for the show. “They flew me in for a tryout where I beat the crap out of a couple of executives. They seemed to like the idea I was calling them Nancies and little girls when they wouldn’t keep up. Next thing you know, I got the job.”

Legend, along with fellow WWE alumni D’Lo Brown, were assigned the task of training British celebrities to become professional wrestlers on a five-day-a-week shooting schedule in February and March of this year.

“Basically, I would take six British celebrities and D’Lo takes six British celebrities. I don’t teach them how to do huracanranas or the televised wrestling stuff, we teach them shoot stuff. We beat the crap out of them. Eventually it lead into them getting wrestling-type gimmicks. Then they fought each other in American Gladiator-style games. I’ve got to give them credit, these guys beat the crap out of themselves. I enjoyed it.”

The show never reached full potential as poor ratings forced ITV to pull the show. According to Legend, and online reports, the remaining episodes of the show were placed on a weekend time slot, with no word on a second season.

Now in his mid-thirties and married, Legend admitted that the rigors of wrestling for 15 years are starting to catch up, and is now more conscious of what he does in the ring for the sake of his personal life.

“Every time I got out for a match, I have to call my wife before and tell her that I’m okay and call her right after and tell her I’m fine. I’m 35, going on 36 in September so I feel the bumps a little more than I used to. Fortunately I’m very immature, so it balances out.”

It’s a far cry from the free wheeling days of being a member of the Thug Life faction on the independent circuit with the likes of Edge, Christian, Rhino and Bloody Bill Skullion.

On the topic of Rhino’s dismissal from WWE, Legend stated it came as no surprise given both the current creative rut and political atmosphere within the company. “It doesn’t surprise me because they weren’t using him correctly anyway,” Legend said.

“I think his misuse was more of a state of them saying ‘Hey Paul Heyman, we’re the boss here.’ Every time [Heyman] gets the book things start to look good and then they pull the rug out from underneath him. He was Rhino’s boy; so if Paul gets cut out, Rhino gets cut out. If Rhino was Kane, Batista or Randy Orton, he wouldn’t have been cut. It’s too bad because when Brock Lesnar showed up, they kept telling Brock ‘Be like Rhino — watch Rhino, intense like Rhino, aggressive like Rhino.’ Brock walked out on the company, Rhino would’ve taken a bullet for them. It was their own stupid fault, they had a great talent right under their noses and they totally dropped the ball.”

Although not an avid watcher of WWE programming, from what Legend has seen, it is clear to him that creatively the company is struggling.

“From what I’ve seen lately, it’s a mish-mash of crap. It looks to me like they’re just throwing a hundred ideas, praying something gets over. There’s no cohesive idea or thought going into it. There’s no one thread that’s holding it together. When Vince (McMahon) has his mind on things and puts his foot down, he’s usually right. I think he’s so busy trying to prove that he can do something besides wrestling that he’s letting the wrestling take a dump.”

In keeping with his stark observations on the state of the business, Legend made it clear what up-and-coming grapplers will face in an organization like WWE when it comes to in-ring skills.

“Personally, I think everybody should know how to work and how to do it right. Everything they do should be believable. But truthfully, the way it works up in WWE now, you should not really be able to work. They have agents working every match — if I can go out there and do all the work without the agent there, then the agent doesn’t need to be hired. If an agent is there, taking two guys who can’t work, gives them a program and they do well, the agent gets the credit. If he gives them a match and they do poorly, well, it’s their fault because they couldn’t work anyway. It’s a company keeping agents, who are not even on camera, employed as opposed to having an on-air product that’s worth watching.”

And for those who are truly driven to achieve greatness in the world of wrestling?

“Be big. They’re looking for big guys, they like six-foot-three, they like two hundred and sixty pound guys with ripped abs. Be big, train hard, but ultimately, be a politician. I hate to say it, but for big time success, you need to be a politician,” Legend observed.