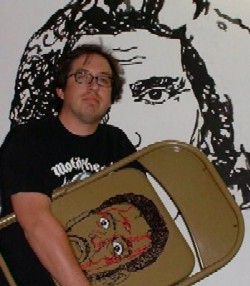 Such were the trials and tribulations for Mike Scheef, 34, an artist from Omaha, Nebraska. Scheef faced an uphill battle when his passion for using wrestling for inspiration for his artwork while at the University of Nebraska for fine arts, and then a short stay at Boise State for a start of a Masters degree, was questioned by the powers-that-be.

“It didn’t go over too well,” Scheef told SLAM! Wrestling during the Induction Weekend for the George Tragos/Lou Thesz Professional Wrestling Hall of Fame in Newton in July.

In his introduction to his new self-published book of wrestling sketches, 1000 Wrestlers, Scheef explained further. “I wouldn’t be the first artist to delve into the sport for inspiration. Unfortunately, my professor did not see things the same way. Wrestling was low class, not something I should be addressing with my work. In the meantime, I was hurrying home from her Monday night seminar class to catch Raw and the replay of Nitro.”

Scheef gets the last laugh on August 13, when a display of all 1,000 drawings will be hung at the Nicholas Street Gallery in Omaha, with four wooden exposed posts in the gallery used as posts for ring ropes, upon which the sketches will hang. He’s also been painting steel chairs to surround the ‘ring.’

He comes by his passion for wrestling honestly. Scheef is a fourth-generation wrestling fan, as his great-grandfather, Mark Chester, was a middleweight champion in Nebraska during the days of Farmer Burns and Frank Gotch. A screenprinter by day, Scheef got hooked by his grandmother, who was a passionate fan, and had a basement full of wrestling pictures. “It’s always been there,” he said.

While at university, he started drawing more and more wrestling. In April 2003, he started to concentrate on drawing faces (even the masked ones). By the time the year 2005 arrived, he’d drawn 1,000 faces.

“I really got into the research, finding guys, and I just couldn’t quit,” he said. “I would find a name, go out and find a photo.” Often, he’d just sit with his wife Merry watching television and sketching, using pencil then going over it with a fine point Sharpie marker. He guesses he went through 15-20 sketchbooks, and several boxes of markers.

1000 Wrestlers is full of big and small names from the all the ages of pro wrestling, mixed up throughout the 160-page book and in no particular order. Some names are downright obscure. But they all have something in common — Scheef was able to find a photo of their face.

The original plan was to just have a public display for the sketches. “I had no idea to make a book but then the format seemed to fit a bit,” he said. Scheef tried a few publishers before deciding to go it on his own. He printed it locally, and started selling it for the first time at the Newton induction weekend for $10 a book. Scheef also contributed his drawings of the inductees for a special George Tragos/Lou Thesz Professional Wrestling Hall of Fame poster.

Scheef is understandably proud of his work, admitting it was somewhat of a personal obsession. “If a picture tells a thousand words then these faces bring back a million memories.”