Warrior 1 suffers an embarrassment of riches

OSHAWA, ONT. — Sunday Warrior 1 Wrestling provided a smorgasbord of today’s indy stars for wrestling-starved Toronto-area fans. But like a Vegas buffet, sometimes a show can have too much of a good thing.

Wrestling in and around Toronto has been in a hit-and-miss proposition for the last number of years, with indy promotions popping up here and there, but very rarely making a dent in the non-hardcore psyche. 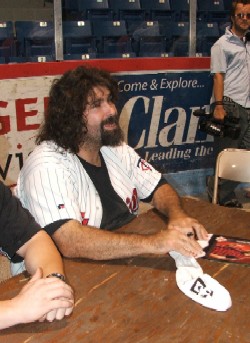 Sunday’s show at the Oshawa Civic Centre (probably the biggest indy show in Canada in years) was a throwback in many ways, and not just because the arena has been playing host to professional wrestling since it opened many decades ago. By advertising to the general public in a way few indy promotions do (or can afford to do), Warrior 1 attracted the casual fan, especially with Mick Foley as the headliner referee for the main event.

But if the casual fan is there, having perhaps been away for a while, they can also be overwhelmed by the choices at their return to the salad bar. Wrestlers were brought in from all over Canada — Kingman and Mike Hughes from the Maritimes, Frankie the Mobster from Montreal, Team Canada from Windsor; then there was the U.S. contingent of big names, from American Dragon to Samoa Joe to Raven to Kamala. It was truly an overwhelming selection of talent.

That, more than anything, describes the show on Sunday, which opened its doors at 11 a.m. for autographs. Counting the pre-show matches with lesser-knowns, and the main show that got underway at 3 p.m., and ran until 6:30 p.m., the 1,000 or so fans in attendance got their money’s worth. But they also got a dizzying array of matches, styles and wrestlers.

As for a return engagement, fans have to wonder who the promotion is built around. Is it the big name stars, or the local indy workers? Obviously the rub from and experience working with today’s stars is a good thing for Toronto wrestlers. But did the fans buy in to them? Or will they even be remembered given the sheer number of grapplers on the show?

Early in the show, Foley had a spot on the microphone where he used Mr. Socko for a verbal beatdown on Toronto’s own sock puppet, Ed The Sock. Feeling slighted, Ed The Sock sent in his minion Samoa Joe to lay a beating on the hardcore legend. This being wrestling, most in attendance knew that Foley, left lying in a heap, would get his comeuppance by the end of the show.

For the main event, Samoa Joe came out first, followed by his manager for the evening, Jimmy “The Mouth of the South” Hart. Next, NWA World Heavyweight champion Raven came out (sans title belt). Last to be introduced was Foley. The match went to the floor a few times, and both men were thrown and/or rammed hard into the ringside barrier. The bout spilled into the crowd at one point, and Foley did a funny, slow count. After Raven introduced a chair to Joe’s head, Foley announced it would be a Raven’s Rules match. Joe clotheslined Foley at one point accidentally, and started to trashtalk the hardcore icon. Foley retaliated with Mr. Socko, and a mandible claw for Jimmy Hart as well. Dazed by the sock, Joe fell into Raven’s Evenflow DDT, and Raven climbed on top of both Hart and Joe for the pinfall victory.

The semi-main event was originally promoted as Kid Kash versus American Dragon Brian Danielson in their first-ever meeting. Somewhere along the way, perhaps to further confuse the casual fans, a Toronto-trained grappler named Extremo, was thrown in at the last minute to make it a 3-Way match. While entertaining, the extra grappler took away from the drama; but Extremo was also the only one to submit (to a Dragon chokeout). The match ended when Kash was disqualified — the only DQ ending of the main card, much to the backstage booker’s credit.

The stars of the show, however, were the triumphant returning heroes from TNA known collectively as Team Canada. Lead by Coach Scott D’Amore, Petey Williams and Bobby Roode were over big time, and there was never really any doubt that they wouldn’t prevail against the team of Sinn (organizer of the show) and Elvis Osbourne (replacing no-show Slash from the New Church). The highlight of the bout was the post-match beating of the infamous Toronto ref know as Pee Wee Kastles. Team Canada beat him down, including a D’Amoralizer and moonsault. They then stripped him down to his shorts and whipped him.

Here are the rest of the results from the show:

Sinn at the helm of Warrior 1 Wrestling