ROH Manhattan Mayhem lives up to the hype

I opened my mailbox last Friday and found a package from Ring of Honor. Usually these packages have a number of releases but in this case, it was simply one, and enclosed was a note from ROH Booker Gabe Sapolsky.

“I hope that you will give this release immediate attention. I feel this is the best home release in ROH history and I never make statements like that. It is also a home release where all the parts make up the great sum. I hope you will pretend it is a live PPV and watch it straight through (as) the flow of this show is important and I believe you will get the most out of it by doing so.”

Well with this glowing recommendation coupled with the stellar reviews from live attendees at the New Yorker Hotel steps away from Madison Square Garden, I couldn’t wait to pop the release in and curl up for a night of ROH action. 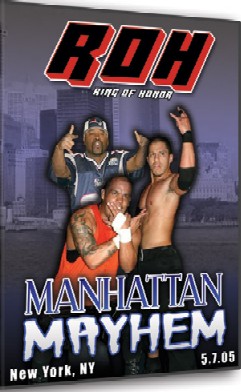 Frequently when something has been hyped, rehyped and built to huge expectations, it fails. In the case of the May 7, 2005 show, ROH Manhattan Mayhem, there is no disappointment. Believe the hype, because this is the best overall ROH show in its three-plus year history.

Every match from the opening tag between Lacey’s Angels of Izzy and Deranged against former Special K teammates Dixie and Azrieal to the red-hot closing tag match of Samoa Joe & Jay Lethal against Low Ki and Homicide could main event any independent wrestling event in the world and send the fans home with their moneys worth.

There is a lot of variety to the show as well. Colt Cabana and Nigel McGuinnes play a game of one upmanship with a European flavour, James Gibson and Black Tiger have a fun Japanese-style match, and the tag title match between champions BJ Whitmere and Jimmy Jacobs and challengers Jack Evans and Roderick Strong is a blend of old school and new school tag team wrestling.

There are four matches that have a great deal of back history, which is explained to ROH fans by the commentary team of Jimmy Bower and Dave Prazak. The storyline of Samoa Joe helping former Special K member Jay Lethal get his head on straight and win the Pure title, and the match between teacher and student continues to establish Lethal as a breakout star. Another match that helps to build another part of the future of Ring of Honor is the bloody dog collar match between CM Punk and Jimmy Rave, that continues the fiery feud between the two and continues to make Rave a main event player.

Many fans feel that TNA dropped the ball with their misuse of Alex Shelley. Shelley proves those critics right by cutting a killer promo reflecting on the history of Generation Next and then goes toe-to-toe with the ROH Champ Austin Aries. The two played up on the history of their time together and seemed to have a counter for each counter to their foes moves.

The finale is a non-stop, action-packed fight. The announcers outline the history that Samoa Joe has with Homicide and Low Ki, and the ending is one of those moments that has you hitting rewind again and again. (Making a one-sitting viewing straight through next to impossible!)

Do yourself a favor and order this show. Set aside a couple of hours and watch it in its entirety. By the end of it, you’ll remember why you became a wrestling fan in the first place.