TORONTO — Get a couple of WWE stars together, and inevitably a dance contest breaks out. Such was the case Friday when Christian laid down a spinarooni challenge to Booker T.

The two grapplers were on hand at Toronto’s Eaton Centre to answer questions, promote a variety of events, and sign autographs. 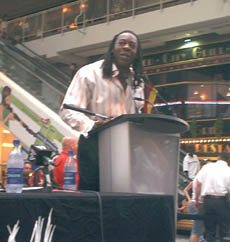 Booker T at the press conference in Toronto. Photo by Greg Oliver

Before getting down, Christian acknowledged the possibility of a move for him. “It’s still a possibility I might be going to Smackdown!” he told the assembled crowd and media, adding that the show needs a dose of “Triple C” — Charisma, Canada and Christian. (And after Sunday’s Vengeance pay-per-view, Christian plans to add Champion to the ‘C’ list after he defeats John Cena and Chris Jericho, promising to be the first WWE champion ever from Toronto.)

Booker T and Christian talked a little about their history together, and their feud, before the tension rose a notch to result in a spinarooni contest. There was no question in the fans’ eyes that Booker T won the impromtu contest, but that Christian still had his “peeps” in attendance.

Afterwards, they shared a staredown/photo-op, then a hug.

“I didn’t think you were going to do it,” joked Booker T.

“I had to entertain the peeps,” quipped Christian.

The biggest announcement on Friday was a Raw vs Smackdown charity golf tournament to be held on Friday, August 12, 2005 at Angus Glen Golf Club in Markham, Ontario. All proceeds will go to Ronald McDonald House Charities. (For information on the golf tournament or to purchase foursomes, contact Kelly Wayling at 905-887-0090.)

On hand was George Cohen, the founder of McDonald’s in Canada. “Before you boo me, listen,” he told the crowd, explaining how the golf tournament will raise money to help families who’s children are hospitalized. He said that he was honored to be a part of the event, and proceeded to win the crowd over by revealing his Christian “Captain Charisma” t-shirt.

In the media interviews, Christian said that his golf game was “non-existent.”

“I haven’t played in about five years, with the busy schedule. I’ll have to hit the driving range and the putting green a little bit here to freshen it up a bit,” Christian said, before Booker T jumped in.

“The Smackdown crew, we’re a pretty tight unit. Myself, Undertaker, Rey Mysterio, pretty much on a weekly basis, we’re out there working on our game, working on our golf game,” Booker T said. “I’m telling you right now, Raw is going to have a hard time. Smackdown! is going to come out on top.”

On Friday, July 22 and Saturday, July 23, WWE will be having a legends weekend in Niagara Falls, Ontario at its store. On the Friday, Roddy Piper, Bobby Heenan and Gene Okerlund are scheduled to be there.” Responding to a fan question, Christian talked about his wish-list of ’80s stars he’d love to face in dream matches, including Ricky Steamboat, Randy Savage and “Cowboy” Bob Orton Jr..

The WWE returns to southern Ontario in August with a series of shows, leading up to a Smackdown! taping in Toronto on Tuesday, August 16.

Everyone in attendance praised Toronto fans.

“It’s a melting pot … I go out here and have fun like it’s New York City. It’s a great place to be. Toronto, actually, is one of my favorite cities,” said Booker T, who hails from Houston, where he just opened a wrestling training school with his brother Stevie Ray. “I think the fans here are just as passionate about their wrestling as they are about their hockey.”

Christian has been the recipient of the strange reactions of Toronto crowds, including being cheered against the mega popular Rock. “[Toronto fans] take pride in the fact that they’re a little different than the fans everywhere else,” Christian said. “They’re not going to respond the way you think they’re going to respond. I think they take pride in the fact that everybody else knows that.”

Both Booker T and Christian acknowledged that moving from Raw to Smackdown! is just part of the business that they cannot control.

Booker T has found a home on Thursday nights on Smackdown!, and figures that the fans will find them again when UPN moves the show to Friday nights. “I don’t think the day or time are going to dictate what the outcome is going to be. I think the talent, the product … it’s just going to be up to us to go out and perform.”