In Dusty-speak, the new autobiography of Dusty Rhodes is full of “if you wills” instead of “jelly wellys,” with action favouring bionic elbows rather than a figure-four leglock. And, unfortunately, it’s got a “Dusty Finish.” 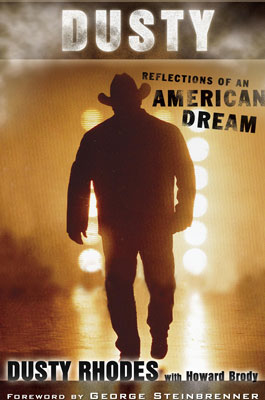 But, true to form, Dusty: Reflections of an American Dream, written by Rhodes with former NWA President Howard Brody, is an entertaining, colourful ride — just like Stardust himself.

It’s got the cadence and tone of Dusty throughout, a rhythm that keeps you reading in anticipation of the next angle or insight. You’ll “rolly polly” through the pages.

You’ll also laugh at the tales of “Captain Redneck” Dick Murdoch, be touched by his appreciation for friends and family, be angered by his ego (which he reminds us often is large) and be educated on some of the backstage shenanigans that took place everywhere from Championship Wrestling from Florida, Jim Crockett Promotions (JCP) to Japan and the back roads of Texas.

The book is written for true fans, and doesn’t try to explain terminology or much background on wrestling or various wrestlers. This makes for a breeze of a read for all the hardcore fans out there, but perhaps might be a stumbling block for somebody who only knows The American Dream from afar. The language is ribald, sex talk is pretty blue and punches pulled add up to a grand total of zero. Rhodes, now 59, addresses many of his controversies from over the years:

It’s all good stuff. The brief quotes from various people from Dusty’s life are a welcome respite from the trampling by the “Bull of the Woods.” (Kudos to Sports Publishing for the index too!)

But like a Crockett NWA show from the late ’80s, Dusty: Reflections of an American Dream, leaves you thinking as much about what didn’t work as what did.

Taking a line from “Gorgeous” Jimmy Garvin, it seems that Rhodes believes that “It’s not his fault.” Jim Crockett Promotions burning through money in the late ’80s, being forced to sell to Ted Turner? It was an accountant’s fault; repetitive, infuriating booking that burned out towns during his watch (hello, Chicago) be damned. The “Dusty Finish?” “It doesn’t exist. … The phrase was created by sheet writers. … [It] was around a hell of a lot longer than before I was booking,” according to Rhodes.

A couple of whoppers that made this reader roll his eyes: Dusty was Vince McMahon’s first choice to lead wrestling into the MTV generation, and “the yellow finger,” Hulk Hogan, was the fall-back; perennial AWA World champion Nick Bockwinkel was a “mediocre hand.” Yes, it’s ego talking; but it’s an ego who has been there and succeeded. (“In my 30-plus years of being in the business, I have seen more shit go down than one can imagine,” Rhodes notes.) He always had the gift of gab in interviews, and this book is no different; he can spin a tale with the best of them.

With a 30-year career, there obviously has to be things left out. Where was the discussion of the Bunkhouse Stampedes and the NWA’s suicidal run into the Nassau Coliseum on Long Island? What were the politics behind his NWA title wins? How was Rhodes “f***ed over” by J.J. Dillon? How come the Road Warriors and the “metal spike” don’t get mentioned? How did the War Games idea come about? Did the jokes about his weight hurt? (Jesse Ventura: “Dusty Rhodes wouldn’t win a body building contest for best abs, McMahon, he’d win for MOST abs.”)

As active as he wants to be on the independent circuit today, and recently dismissed as booker for TNA, Rhodes still has his hand on the pulse of wrestling. His view of it is somewhat harsh, but relevant. “I can look at guys I’ve broken into the business and guys I brought in and I can say I knew from the time they walked into the room if they were the deal,” he writes. “However, I cannot walk into a room anywhere in the country where there are independent wrestlers and see one person who tells me they’re the real deal. On the independent circuit, I’m walking around and seeing great stuntmen.”

Yet as I sit and think about the book, I keep coming back to its conclusion.

During his stint as a booker — particularly in Jim Crockett Promotions — Rhodes left fans with a bad taste in their mouths with his booking that had them believing that a title change had taken place only to have the decision reversed. It became known as a “Dusty Finish,” rightly or wrongly. He didn’t create it, and probably gets unjustly criticized for it, but in the late ’80s when the WWF was having pretty clean finishes — especially in title matches — Dusty’s NWA was creating convoluted finishes seemingly night after night, reaching bigger audiences than ever before.

In Dusty: Reflections of an American Dream, the ending is weak too.

The chapter on his family starts off well with an appreciation of what a wrestler’s wife goes through, but degenerates into a love-in for his kids and an amateur shrink’s take on the relationship between him and his son Dustin. Following that, it slows a little more as Rhodes books his “Starrcade Prime” card, covering many of the workers he’s already praised in the book. To conclude, Rhodes and Brody allow 10 different fans to ramble on about what The American Dream has meant to them. Those 20 pages grind everything to a halt.

But it’s all left open enough for a sequel, just like that Chi-Town Heat Starrcade pay-per-view in 1987 where Dusty failed to deliver a much-needed Road Warriors win over Tully Blanchard and Arn Anderson. I may be infuriated and have bitched to my friends about the book(ing), but I’ll be there for the next one.