They call him “Mr. 630.” He’s a former NWA World Junior Heavyweight Champion. But Jerrelle Clark is also a new father.

His wife, Rebecca, gave birth to Jerrelle Aython on March 25, 2005. “It just makes me look at my life and how I’m doing,” proud papa Clark told SLAM! Wrestling. “I think about what I have to do to make sure he has a better life coming up. I think about being there for him every step of the way. And most importantly, it made me think of toning down a little so that I can come home safely.” 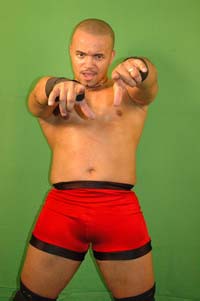 Concern for his family was the reason that, after his debut, Clark returned to college in 2002 to pick up a second degree in Graphic Design. “I just wanted to make a better life for my wife and I, that and I love education.”

In fact, it was that while he was getting an education (a BA in Computer Graphics) that Clark got his start in professional wrestling.

“I was in college in Maryland where I was coaching amateur wrestling for a local high school. One of the kids father was a pro wrestler named Jeremy McCullough,” Clark remembered. McCullough worked for Maryland Championship Wrestling as Jay Mac.

“Jeremy knew my background in amateur wrestling and offered to train me if I gave his son some extra attention. His son went on to states that year and I went on to start training.”

Clark remembers training as being “awkward. A lot of conditioning and hard work. I didn’t have a ring to learn how to run ropes. I took bumps on gymnastic mats and wood floors. We spent the majority of the time going over basics and psychology. Very old school type stuff.”

Clark trained with McCullough in 1997 and 1998, but because he was also concentrating on his studies, he couldn’t make his debut until 2000 when he traveled to Florida and lost against Cutthroat Saxon.

“I was very nervous. All I could think of was please don’t muff up and prayed that I didn’t get aquashed. My gimmick was named Lil’ Balla. A basketball player who came out to Skeelo’s ‘I wish I was a little bit taller.’ Went out there and had a very good comedy match. I look at it today and laugh at how bad I was at the time.”

After returning to school to finish college, Clark resumed his pro career, spending much of those early months in Florida, wrestling for organizations such as IPW Hardcore and NWA Florida. He’s found that Florida is a unique wrestling landscape. “There is still the old school flavor but with the influence from the north, Florida is becoming a great melting pot of its own.”

It was while working for an IPW show that he received the nickname, “Mr. 630”, after one of his finishing maneuvers: the 630 Senton.

“I was practicing the 630 at an IPW show in St. Petersburg, FL and Ron Niemi saw me doing it and asked me to do a run-in that night to hit the 630. After that he dubbed me ‘Mr. 630’ and it stuck. At the time I thought it was cheesy but that is what people started to notice so I went with it.”

In the fall of 2003, Clark made his first appearance in NWA-TNA. Clark describes TNA as “an alternative to WWE. We do not imitate. You will see a variety of styles that not allowed in WWE (for various reasons). Things that would amaze and keep you on the edge of your seat. But we still cater to the old-school fans at the same time.”

Even as his career in TNA began, Clark remained active in NWA Florida. On January 10, 2004, Clark defeated Chris Draven to win the NWA World Junior Heavyweight title. Of all the championships that he has held, including the NWA Florida Tag Team champion (with Mikey Batts), the NWA Florida X Champion and the NSW Heavyweight Champion to name just three, Clark just names this title as the one that stands out “because of the heritage and tradition that it represents.”

The championship which dates back to 1945 has been held by Verne Gagne, Dory Funk Sr., Fred Blassie and Danny Hodge among others.

Over the summer of 2004, Clark would see plenty of action in TNA, in both singles and tag action, battling every one from A.J. Styles to Bobby Rude to Kid Kash.

In September 2004, Clark would team with Mikey Batts (a frequent partner in both TNA and NWA Florida) and participate in what he pointed out as the biggest moment in NWA-TNA thus far.

“My biggest match would have to be the final Wednesday night (pay-per-view) in Nashville. The tag team domination match. Mikey Batts and myself took on five other teams where all 12 of us were in the ring at once in a battle royale style. Your team was eliminated when both of you were thrown out. It became a regular tag match when it came down to the final two, their tag partners were able to rejoin at this point. Well, I survived the battle royale and it came down to (Frankie) Kazarian and Michael Shane vs us and we came out on top with a huge pop from the crowd.” 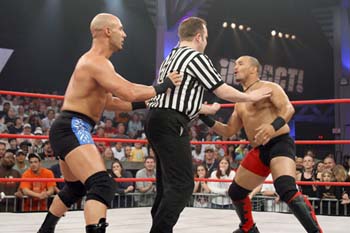 Clark remains active in NWA-TNA having appeared on the Victory Road, Against All Odds and Hard Justice pay-per-views and on the pre-match shows for Turning Point and Destination X. Clark has also seen action in Full Impact Pro Wrestling and Georgia Championship Wrestling.

On June 10th, he returned to NWA Florida to compete in the Peterson Cup, losing to Petey Williams. Clark was not out just to win the tournament but to get some payback from Williams. “I forgot how many times I have taken the Canadian Destroyer! I’ll be damned if I take it again.”

Clark also competed in the 2003 Peterson Cup, losing in the first round to Tony Mamaluke.

“Mr. 630 is predicting a bright future for himself.

“Only good things are set to come. I just want to do the best I can. I have met all of my goals from when I started in this business. I don’t see myself slowing down neither. So, keep your eyes and ears open because I’m setting new goals and I won’t stop until I achieve them as well.”