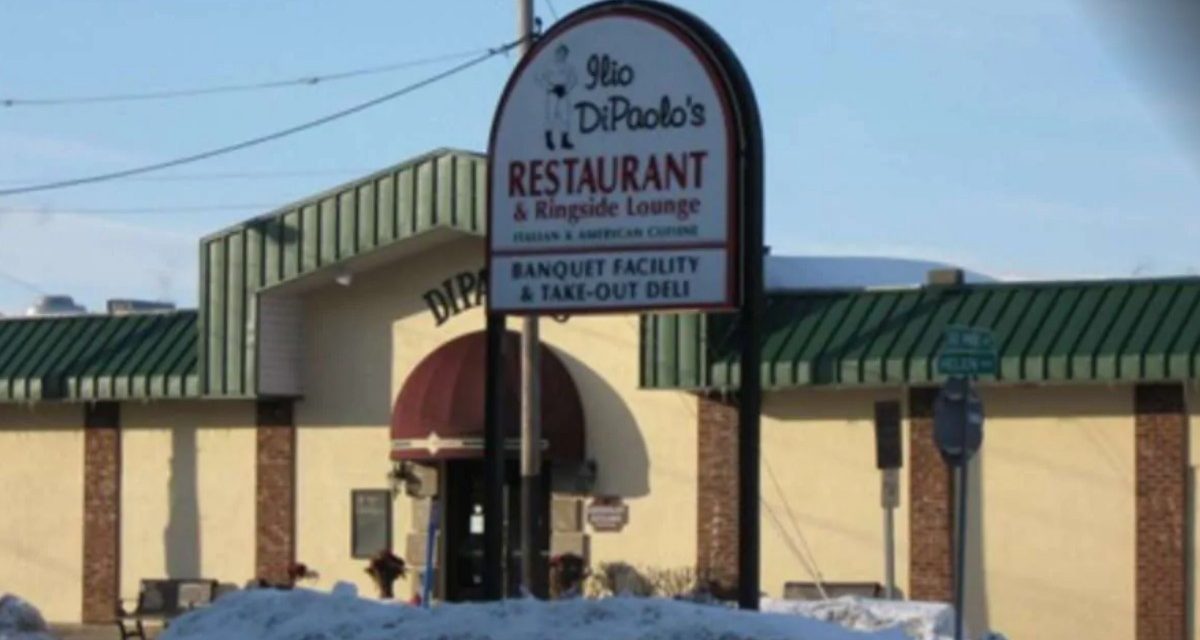 BLASDELL, NY – Heading to Ilio DiPaolo’s Restaurant and Ringside Lounge is a little like going home for Thanksgiving. Surrounded by friends and family in a warm, busy atmosphere, you can feast on fabulous food until you can eat no more. Consider it a wrestler’s heaven.

For 40 years, the DiPaolo family has keep its restaurant as one of the landmarks of upstate New York, a location sought out both by old-school wrestling fans and wrestlers, but also by the Buffalo Bills, and hordes of locals. Their sauces and breadcrumbs are available in local stores, the take-out business is growing and the banquet business always booming. 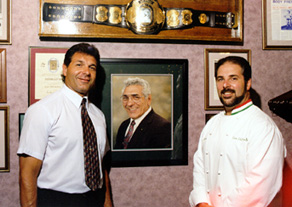 There’s probably no bigger fan of DiPaolo’s than “The Destroyer” Dick Beyer, who considers it one of the best restaurants in the United States.

“I take all of my friends there, we have the Syracuse University Alumni meetings there and I take my Japanese visitors there,” said Beyer. “They all say the food and service is terrific.”

Ilio DiPaolo’s oldest son, Dennis, is in charge of the restaurant these days, but it is still very much all run by the family, with three generations having worked there.

The importance of family can be seen all around. “Three generations here now … It was a dream of my father to have everybody come together here,” said Dennis DiPaolo. “Our employees too, many of them have been here 20 years or more, some 40! We’re honored. That’s a big key to our success. Our employees have been great, knowing what the customers want. It’s been great for us.”

Another Buffalo regular, Johnny Powers, said that “family warmth” is the key to the restaurant’s longevity, and that “the great community charity spirit that Ilio worked hard to establish and that Dennis continues” have made them a permanent, and much-loved, part of the area’s mosaic.

Ilio DiPaolo, from Introdacqua, Italy, arrived in America in 1951 via Venezuela, having started into the mat wars. He met and married Ethel, step-daughter of Buffalo promoter Pedro Martinez in 1952, and eventually they settled in Western New York and had four children. Ilio was constantly a babyface, and was known for his size — especially his huge hands.

“He was just like a racehorse. He was so damn tough, you’d hate to even touch him! He would touch you and he would hurt you!” recalled Sweet Daddy Siki, laughing at the memories.

Approaching his 40s, and slowed by injuries, Ilio decided to branch out into another career. He opened a small pizzeria in Lackawanna, New York, but it was destroyed by fire. The second pizzeria, in nearby Blasdell, grew into what today is the 10,000-square foot Ilio DiPaolo’s Restaurant and Ringside Lounge.

“There’s something about Blasdell. He loved the small town. … small-town atmosphere,” Dennis said of his father. “We never wanted to move, and we had many offers. ‘Come to the north side, we’re really expanding, we’re doing this…’ We said, ‘Nope, this is where we started, this is where we grow our tree, right here.’ And that’s what we’ve been doing for 40 years.” The city of Blasdell has a monument in Ilio DiPaolo’s honor in town, and there are two more in Introdacqua.

Until his death in 1995 at age 69 after being struck by a car, Ilio was always at the restaurant, making people feel at home.

“When Ilio was still alive, he was the head man and met all customers as they came in,” said Beyer. “He made sure he went to every table to say hello, sign an autograph and measure his big hands with anyone at the table.”

“My father always said, listen to your customers. They’ll tell you when you’re doing good, and tell you when you’re not,” said Dennis. “I think he learned that all through his own life through pro wrestling. They knew if they were doing a good job by the crowd. That was the key. He carried that same philosophy here-you know how you’re doing by your customers. You give them good food, you give them good service, they’ll tell you what you need to do. In the ring, if they say you need more action, you need more action. Break that hold and get on to another one.”

Over the years, the restaurant has gone through many changes. The latest remodeling had the banquet rooms redecorated in a Tuscan theme. For the wrestling fan, it’s a pleasure to browse the walls, seeing many stars of today and the past, from Diamond Dallas Page to Johnny Barend. Many plaques and awards cover the walls, and countless Buffalo News stories cover various stages of the DiPaolos’ lives. The salt and pepper shakers are even housed in mini wrestling rings.

Dennis’ brother Michael is the head chef, and the menu offers up authentic old-world Italian treats like pasta and pizza, along with steaks, veal and seafood. Their mother Ethel continues, as she always has, to help in the office with some of the bookkeeping. Their sister, Barbara, is the lunch hostess, and their other sister Lisa helped out as well until her death in a car accident in 1989.

As for The Destroyer, Dick Beyer, he still comes in once a week. “He’s like an adopted father,” said Dennis. “Anybody wants to talk about wrestling, I say, ‘You know, you’ve got to call my Papa Dick, The Destroyer. It’s funny, because he’ll go, ‘Dennis, how do you want me? The Destroyer? Or Dick Beyer?’ ‘Okay, start off as The Destroyer, then we’ll end up with Dick Beyer later.’ … He’s a true class, true professional and a great contributor to professional wrestling.” 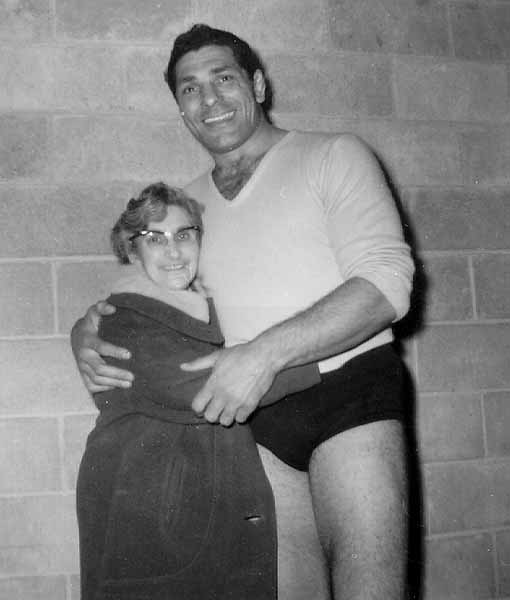 Beyer shared a story of Ilio directing his family. “While he was alive he sent his youngest son, Michael, to one of the best cooking schools in the country and put him in the kitchen. He trained Dennis, his oldest, to do his job meeting customers. His daughters were taught to handle the service and waiters, and his wife, Ethel, took care of the payroll. He actual sat them down at a table after he had them all in position. With all of them sitting at the table he said, ‘Michael you see the kitchen door, you go in the kitchen and do the cooking make sure it is Italian! Dennis, you see the door, “stay out.” Girls, you take care of the waitress and Mama you take care of the payroll. Me, I’m going to Florida.'”

The biggest project for the restaurant’s 40th anniversary is a cookbook, with a planned June release. “We’re tying it in with my father’s recipes, old-style recipes, along with stories from his birth in Italy all the way through his pro wrestling career,” said Dennis. “It’s got him going against Gorgeous George, the Masked Marvel, the Mad Hindu, a lot of the stories that people remember, the big main events.” It features testimonials from the likes of Marv Levy, Jim Kelly and Diamond Dallas Page.

It will also serve as a family history book, and will be an excellent gift for patrons and friends of the restaurant. “After 40 years in the business, you’d love to have something to give to somebody and say, ‘Hey, here’s a gift from us. It’s the story of my father that you can pass on to the next generation, because a lot of those recipes get forgotten,'” said Dennis.

Proceeds from the sales of the cookbook — and all the various Ilio DiPaolo’s products in the local Wegman’s, Tops and other stores — go to the Ilio DiPaolo Scholarship Fund, which has helped out amateur wrestlers, The Children’s Hospital of Buffalo and the Make-A-Wish Foundation.

“My father’s name brings a lot of people together for things. It’s about more than money, it’s about bringing the people together,” said Dennis. “The perfect example was the Legends shows we ran here … They were awesome.”

The four Legends events at the Buffalo Memorial Auditorium and the HSBC Arena were run in conjunction with WCW, and featured stars of the past being honored on the shows, with proceeds going to the Ilio DiPaolo Scholarship Fund. The last wrestling event at the Aud was a Legends event, drawing a sellout crowd and featuring Buffalo Bills quarterback Jim Kelly getting involved in the Public Enemy vs Nasty Boys match.

After 40 years, Ilio DiPaolo’s Restaurant and Ringside Lounge is full of memories. For Dennis DiPaolo, one stands out “bigger” than all the rest — when his father brought in André the Giant. “It was late, he came in. He said, ‘C’mon Dennis, get back and start cooking!’ My father says, ‘For André, you cook for three!’ … He was great. In fact, we had a wedding going on in the backroom, 200-some people, and they all came through and met André the Giant. Every single person at the wedding. It was just huge, the reaction that they had. But the true professional that he was, great guy … Boy, he was the only guy that ever made my father look small!”

Greg Oliver and his wife, Meredith, spent a leisurely three-hour dinner at Ilio DiPaolo’s Restaurant and Ringside Lounge, doing their best research and investigative journalism to compile this story. Greg had the Pasta Platter (Home Style Cheese Ravioli, Gnocchi, Fettuccine & Manicotti with House Sauce), and Meredith had Shrimp & Scallops with Ilio’s Marinara (Sautéed with Blend of Garlic, Onions and Tomatoes over Linguini). Despite the need to take leftovers home, they still managed to share a gelato. Greg can be emailed at [email protected].