A wounded Rico calls it quits

LAS VEGAS – Rico Costantino is pretty bitter about the way his wrestling career ended. But it’s not over his surprise departure from WWE in November 2004, which he sees as a business decision not a personal one, but over his last tour for All Japan.

“All Japan is a bunch of liars, liars. And I will go on record saying that they are liars,” Costantino told SLAM! Wrestling in an exclusive interview in his hometown of Las Vegas. “I left the country with no money. Nothing. With the promise that they would wire me.” 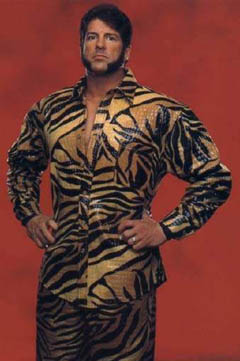 After being released from his WWE contract in a phone call from talent relation boss John Laurinaitas (Johnny Ace), Rico was paid to stay at home for 90 days. Despite being contacted almost immediately by All Japan to come wrestle for them, he declined until his 90-day no compete clause ended on February 2, 2005. On that day, he worked his first All Japan match, teaming with Bull Buchanan to defeat Mitsuya Nagai and Masayuki Naruse to win the All-Asian Tag Team titles.

Rico had been convinced to give All Japan a try by friends like Buchanan and Taka Michinoku. He worked out the deal with All Japan’s American liaison, but was repeatedly told that a contract was not necessary.

His last match in Japan was also his last ever wrestling match. At 44 years of age, Rico Costantino’s brief flirtation with pro wrestling is over.

“I haven’t worked since. I am completely done. … I can’t say it’s a bitter end to wrestling. It’s not. That was an incident, unfortunately, that I allowed myself to get into, to trust,” he admitted.

Still, Rico is a very positive person, and did actually enjoy being in Japan and the in-ring action. “Japan was great, the fans were great, the wrestling was great, the other guys were great. Kowada tried to take a little liberty with me, but I soon changed his way. He tried to be a little stiff, and I was a little stiff back. After that, we had a mutual understanding. … They wanted to see what I had. Okay. Just don’t knock my teeth out.”

Talking about his dismissal from the WWE roster is a lot harder.

“To me, it was a shock. Ace called me and he said ‘We’ve got to let you go.’ I asked him why. Was it something I did?” Rico said, before resuming after a long period of silence. “‘No. It’s just one of those things.’ It hurts. It hurts now.”

Having had the varied career that he has — police officer, security guard, American Gladiator, motivational speaker, busboy — Costantino has found it easy to come to terms with the business side of the termination, just not the personal one.

“It’s not personal. It’s a business. It’s a business decision. That’s all it was,” he said. “I was never given an answer. Thank you, they said. Johnny Ace said maybe in six months they’d bring me back. Johnny said, ‘you’re on my list to come back. You’re a good guy Rico. You’ve done everything we’ve asked of you.’ And I never complained about anything.

He doesn’t keep in touch with anybody from WWE, though his wife is friendly with Jackie Gayda and Charlie Haas, and they hope to attend their wedding later this year. “It hurts too much because I love them all,” Rico said. “There [were] some people I didn’t like because of their actions. Yeah, some people I had some rough times with. But you know what? We were all family. To me, for five years, I was family with these people. Good, bad, indifferent, we all stuck together. But I don’t keep in touch. I have to move on. I have to move on with my life. Not to say that I won’t keep in touch in the future, but right now, I’m focused … time heals all wounds. It wasn’t a malice-inflicted wound, but it was a wound somebody didn’t see coming. So it hurts.”

For now, Rico Costantino is looking to the past for a new career. He’s enrolled in training for law enforcement again — he first graduated from police academy in 1985 — and given the number of police around Las Vegas, there are many job possibilities. He still has a couple more months of re-training, and has found it rewarding working with trainees almost half his age.

“I’m glad I’m taking the class now, because since 1985 to 2005, laws have changed significantly,” he said. The day before he met with SLAM! Wrestling, Rico had been in a study session into the late hours with some fellow trainees. “They’re looking to me for guidance, so I’m a little teacher again.”

One regret from the decision to return to law enforcement – he had to lose the sideburns that made him so recognizable around town, even months from being on WWE TV.