Konichiwa comrades! I have returned. Reports from sports entertainment spies telling of my demise have proven unfounded, as the People’s Independent Wrestling Revolution (PIWR) blazes onward.

Our comrades in arms from the Land of the Rising Sun have submitted an excellent edition to our every growing selection of professional wrestling alternatives for your indoctri – uh, I mean, viewing pleasure. 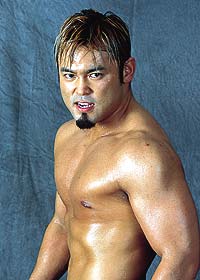 I give you the Best of 2003, Volume Five. It is but one in a series of seven DVDs, showing off the best that Japan has to offer. No long-winded promos, no boob-job wannabes and no corpse humping antics here. It’s professional wrestling at its purest form, strong style! (Note: We are just reviewing Vol. 5, but no doubt the rest are top notch as well.)

WARNING: The PIWR cannot be held responsible for sports entertainment fans who watch this DVD, and in the process of doing so, discover that no-frills, athletically based pro wrestling is a superior product and thus, abandon their patronage of WWE programming.

Ladies first, compliments of All Japan Women’s Pro (rest in peace). Before the bell even rings, it’s clear these women are itchin’ for a fight. In particular, former tag team partners Mima Shimoda and Etsuko Mita have a serious hate-on for each other. This one starts off with some wild brawling all over ring side at the famed Korakuen Hall. From there, the action is fast and violent as only the female grapplers of Japan can deliver. Momoe Nakanishi steals the show in this one with her spitfire drop kicks and airborne offence, although she pays for it by taking a serious beating from Kumiko Maekawa. Of course, what would this match be without Shimoda bringing her pink steel chair into play and super babe Takako Inoue with her stun gun. It’s a wild, twenty minute saga (yes, there are women who can actually wrestle over five minutes), making this a great opening contest for this DVD.

Osaka Pro Wrestling presents a grand tag team contest, featuring Gamma and Billy Ken Kid taking on Jushin “Thunder” Liger and Takehiro Murahama. Osaka Pro is a promotion that does not get the attention it deserves. Well, Gamma and Kid are about to change that. They start with a simple strategy; isolate Murahama and piss off Liger. Bad move. You see, the only thing more dangerous than Liger is a pissed off Liger. Granted, Liger’s better days are behind him now, but he can still steam roll through the opposition when he wants to. If Kid thinks he’s going to become the new masked wrestling sensation at Liger’s expense, he’s got another thing comin’. Murahama is a real treat to watch in this one; great agility, deadly kicks and crisp submissions. All four give a fantastic, high flying performance, upholding the well-earned reputation of Japanese junior heavyweights being some of the best damn workers around.

It’s civil war in All Japan Pro Wrestling! Satoshi Kojima is here to take his rightful place as the new leader of AJPW and has recruited Jimmy Yang (aka WWE’s Akio) in this crusade. But Kaz Hayashi and Keiji Muto will have none of this and quickly focus their attention on isolating Kojima. The fans disapprove of this and make in known out loud. This outburst only further enrages Mutoh in particular, salivating with evil delight as he further punishes Kojima. As brave as our dear Kojima is, he cannot fight these foes alone and in time, Yang makes his presence known in typical show stealing form, not to mention, showing great improvement in his ability to count to 10 in Japanese. A great drama enfolds in this battle, will the fearless Kojima find the courage to rise up and claim his destiny?

This one is the must-see match for this volume, brought to you by New Japan Pro Wrestling. Koji Kanemoto is without a doubt one of the greatest junior heavyweights in the business today, as he faces off against the one and only Akira. Akira is not as active as he once was, via a prosperous stage acting career. But make no mistake; he is timeless when it comes to delivering quality wrestling matches. Both men put their hearts and souls into this battle, lots of technical wrestling, stiff strikes, high-flying offence and submission attempts. Watching this spectacle brought back fond memories of the glory days of the Super-J tournaments from the early nineties. Kanemoto makes it clear he’s the top gun in these parts and takes it to Akira with vigor. But Akira can dish out the punishment as much as he can take it. A certified saga ensues, as the New Japan faithful cheer on both warriors. Damn good product!

Foul invaders from All Japan Pro Wrestling have entered the fortress of the Zero-One promotion! Kaz Hayashi & Jimmy Yang are hell bent on proving that no one can out shine them in the ring. The task of fending off these arrogant interlopers falls upon the shoulders of Naohiro Hoshikawa and Low-Ki. This contest just reeks of athleticism, with Yang and Ki delivering some absolutely stellar, high impact offence. Hayashi is his usual self in the ring, that is, when he’s not getting the living crap kicked out of him, compliments of Hoshikawa. Ki is truly in his natural realm when wrestling in Japan, he fits into the strong style seamlessly with his Great Muta mannerisms and the fans just love him. Likewise for Yang, who I only wish would part ways with his current employer and return to Japan where his talents are truly appreciated, minus the racial stereotype gimmick.

Those All Japan Pro Wrestling warriors are at it again! Satoshi Kojima, along with his partner in crime Hideki Hosaka, have arrived on scene to take out the wily veteran Shinjiro Ohtani and Masato Tanaka. Ohtani and Tanaka are the proud defenders of Zero-One and make it known early on that they will not tolerate the presence of Kojima and Hosaka. There’s plenty of high drama in this hard-hitting confrontation. Kojima just relishes pissing off the Zero One fans as he and Hosaka aspire to embarrass their opponents. Ohtani is always a joy to watch in the ring and has transitioned well from his junior days. Tanaka hasn’t skipped a beat since his days in ECW, becoming a certified fighting ace of the promotion. Both teams pull out all the stops to claim victory in this contest.

Big Japan Pro Wrestling presents… a great wrestling match?! Yes, that’s right. The producers of some of the most insane hardcore matches the industry has every seen can also deliver some good grappling contests. Men’s Teioh, former member of the famed Kaientai faction, is up against the young and powerful upstart, Daisuke Sekimoto. Teioh is the vet here and it shows by smartly countering Sekimoto’s initial offence. But that does little to deter Sekimoto who breaks out some impressive feats of strength in trying to put this one away. Teioh is a patient grappler, but when Sekimoto turns up the heat, a war of wills ensues. This one gets the sentimental favorite vote.

Get your finger set on the rewind button for this one – its Michinoku Mayhem! Tiger Mask (version four) starts off for his team against his nemesis, Ikuto Hidaka. When these two tangle, its guaranteed fireworks – breaking the legal posted speed limit for professional wrestling. Hidaka wants to make it clear he’s the new top gun in Michinoku Pro, but his adversary upholds the honorable reputation of the Tiger Mask lineage the only way he knows how; precision and lightening offence. Not be out done, Dick Togo shows us that he hasn’t slowed down, bringing that all too deadly mix of speed, strength and a teaspoon of viciousness. As for Great Sasuke… well, he’s insane as ever. Throw this guy through the front windshield, then into a wood chipper, and he’ll come out asking for seconds. This inhuman tolerance for pain goes a long way when Togo tries once again to kill Sasuke in this contest. I’ve always had a soft spot for Michinoku Pro – they are the little promotion that could and it’s always fun to watch these phenomenal athletes get in the ring break the laws of gravity.

So, you think women can’t wrestle hardcore (put that chair down LuFisto? The GAEA promotion smashes the perception about what women can do in the ring. The bad girl team of Kaoru and Mayumi Ozaki are in a violent mood (nothing new there). But never let it be said they don’t share their toys – chain, ladder, and wooden plank – with their opponents, in this case, Sakura Hirota and Chigusa Nagayo. Now Hirota and Nagayo have some coordination issues, much to the amusement of the fans in attendance. Despite this, they mount a brave effort against their foes. All four girls deliver a wild spectacle that gets the hardcore wrestling stamp of approval. Kaoru in particular delivers a fantastic highspot off the ladder. Only adding to the drama in this one is the fact that the losers will get their heads shaved at the end.

It’s a battle of wills between the challenger Meiko Satomura and the current GAEA champ and lady’s wrestling legend, Manami Toyota. Satomura once held the belt that Toyota has and she wants it back bad! But more than that, Satomura is set on earning the title of Legend Killer by taking out Toyota once and for all. But Toyota will have none of this and is out to prove that while her glory days are behind her, there is a reason why she has the belt. It’s a war between these two ladies, with Toyota taunting Satomura and her fighting spirit. Satomura shows her nemesis just how much fighting spirit she has, delivering some ferocious offence in the ring. During the bout, Toyota legitimately injures her shoulder, yet despite this, carries on in true champion fashion. This match is in keeping with many of the great athletic performances presented by GAEA, which sadly, has closed its doors as of this writing. It wounds my heart to know that such brave, competent, female wrestling exhibitions such as this one, is becoming a thing of the past. Thanks for the memories ladies.

Comrades, this DVD is a fantastic introduction to the world of Japanese professional wrestling. The commentary is in Japanese of course, but that won’t distract you from the absolute stellar matches. I challenge all who have never bore witness to his particular brand of grappling to take a chance and purchase this or any other DVD from this volume. You won’t be disappointed.

While it is always a sincere pleasure to watch great wrestling, I must confess to having endured some pain while taking in this particular sample. You see, our seating arrangements here at the PIWR bunker consists of specially designed North Korean posture adjustment seats. While our organization fully endorses good posture, it is somewhat distracting to watch wrestling matches while my back is locked in a rather agonizing position. No doubt this can be resolved by a kind financial donation to the PIWR Atlas La-Z-Boy Recliner fund, compliments of SLAM! Wrestling’s producer, Comrade Greg Oliver.