The wrestling career of Guy Joe Brunetti, who died Sunday at age 75 in Phoenix, Arizona, was always tied into his “brother” Joe Tangaro, who wrestled as Joe Brunetti. But it was another late great that Brunetti credited for getting him into the mat wars.

“I was going to the University of Utah, and Joe Tangaro, my partner, he was also up there. We played football together up there and what have you,” Brunetti explained in July 2004. “A famous wrestler from waaaay back really took an interest in me, a guy by the name of Wild Bill Longson … he was a great guy, a great wrestler. He kind of took me under his wing. He said, ‘Guy, I’m going to send you to New York.’ I said, ‘Oh, my God.’ That scared the shit out of me.” 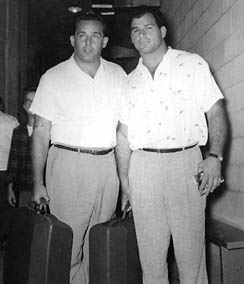 Brunetti gathered his wits about himself, and braved out a trip to New York City. It was a long way from Bingham Canyon, Utah, a town only on the map because of copper mining when he came into the world in 1929.

In New York, Brunetti worked for promoter Toots Mondt. “[Mondt] said, ‘You’ll get a lot of work.’ And I did, six nights a week. It was quite an experience to travel all over there, kind of learn the ropes in wrestling, and how it all came down, and meet the guys. It went on from there. Joe and I teamed up. We found that tag teams were quite popular, so that’s where we really concentrated our efforts.”

To say that the Brunetti boys were a success is an understatement. Wearing their Utah letter jackets, the permanent babyfaces fought all the greats in the ’50s and ’60s, from the Kalmikoffs to the Smith Brothers to the Millers.

They had their supporters on the same side of the heel versus face ledger. “They were a good, smooth wrestling team. They weren’t high flyers,” recalled Sandy Scott of the Flying Scotts.

Kinji Shibuya said the 6-foot-1 Guy Brunetti was a “great performer. Like myself, he was a football player too.”

In the summer of 2004, Brunetti revisited his early life. When he was 16, and old enough to work in the copper mine, he went to work. “I went to work there because they were paying $6.15 an hour, and I thought, ‘Goddamn, that’s great.’ I went to work there.” His parents moved to Midvale, Utah in 1941, and he graduated from Jordan High School in 1948. At the University of Utah, he met Tangaro, who was from Carbon County, Utah.

The new friends began working out together — Tangaro was especially enamoured with the bodybuilding culture — and were convinced by local wrestling impresario Lou Hoffman to consider professional wrestling. With help from Longson and Hoffman, the boys were off to New York to learn a new trade.

Altogether, the Brunettis worked as a team for about 15 years. “We were really close, Joe and I, good friends. We had a lot of fun in the game. I’ll tell you what, wrestling was really good to us, much more than we were probably good to it.”

Brunetti eventually convinced his wife, Lorna, whom he’d married in April 1949, to travel a bit with him on the circuit. Together, they had three children: Tony Mark, Mary Frances (deceased) and Deborah Ann. His is survived by his wife, Lorna, of 56 years, son Tony (Kris), daughter Debbie, 5 grandchildren, and 9 great-grandchildren, brothers and sister John (Pat deceased), Ross (Connie), Carmela (Bert), Laney, and Albert (Maree).

Canada was particularly good to the Brunettis. “Calgary was great, honest to God. We enjoyed living up there,” Brunetti said.

Stampede Wrestling Saskatchewan promoter Bob Leonard called the duo “good, competent workers. Not big men at all, pretty average sized guys. They went a fair number of places. They had a good run here, Toronto, around the States.”

Brunetti also recalled working for Rod Fenton in Vancouver: “He was kind of an old-timer, you know what I mean. But he ran a good territory.” And Toronto: “We had a lot of fun up there. That was a good town … Whipper [Watson] was the king of all of them. … We had a good group of wrestlers, really, in Maple Leaf Gardens. We packed that damn thing. Wrestling was big time in Toronto and surrounding areas, Hamilton, and all those different little towns. Shit, we even went way up north.”

In the early 1970s, both Brunettis got out of wrestling as a full-time profession. “Why we quit wrestling was family. Joe had two boys. I had my son and my daughter and we adopted a girl, while we were wrestling, my wife and I adopted a girl out of Indianapolis, a little baby.”

Tangaro ended up running a bar, and Brunetti tried his hand at running a couple of different restaurants. “We kind of turned our careers into the food and liquor business,” Brunetti quipped.

But wrestling would continue to be a part of their lives. Brunetti started promoting out of Salt Lake City having bought out Dave Reynolds, with Tangaro a silent partner. “We had a hell of a territory there. We brought in all the top names, and everything else. I had TV shows in Idaho Falls, Boise, Salt Lake, different places. We had quite a wrestling group there. It was a very popular show, as most wrestling shows were. … It was a good life, it was good to me.”

The key was landing a TV deal on KSL. Brunetti recalled the negotiations with the president of the TV station. “A friend of mine was the president of KSL in Salt Lake City. I sat down with him, talked to him. After a few sessions, he said, ‘Well, let’s put one on at 10:30 at night after the news.’ I said okay and I lined up some talent. … Gallaghers … [Killer] Kowalski. Kowalski was a big name for me in Salt Lake, I remember. Roy Shire was big, Roy Shire was really big. God, we were really successful at the promotion end of it, sellout crowds. In the summer time, out at Dirk’s Field, the baseball field.

Tangaro ran his Chariton Restaurant in St. Louis, which was a popular hangout for the wrestling crews. He died from Lou Gehrig’s Disease. “It was such a shock, and such a terrible thing. To see a specimen of health that he had, how he devoted his life to it. I had a hell of a time going up to see him and talking with him,” admitted Brunetti. “It was a cruel, cruel ending for him.”

After wrestling, Brunetti pursued a career in marketing with his son Tony as owner/operator of Swiss Colony, Primo Inc., and the successful restaurant The Kings Inn in Sun City, Arizona.

Brunetti will be interred in Phoenix, Arizona, and the family has asked that donations be sent to the Hospice of the Valley of Phoenix.

— with files from The Arizona Republic