Terry Funk is a legendary wrestler whose career goes back to the ’60s and he’s still at it today. Currently touring to promote his autobiography, he has been giving some interesting interviews, to say the least.

On a recent appearance on the TopCat Sports Show, arranged to promote Terry Funk: More Than Just Hardcore, the Funkster was game for any topic thrown at him. He’s still going strong today, because wrestling was in his blood. “It’s a business that you get addicted to,” said the hardcore legend. 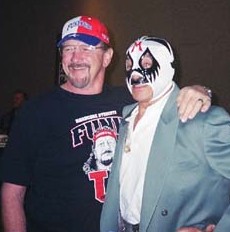 Terry Funk and Mil Mascaras at the Cauliflower Alley Club reunion in Las Vegas in April 2005. Photo by Greg Oliver

Funk has wrestled almost every big name in the business and a lot of less memorable names too. He even wrestled his uncle at the start of his career in front of 150 people.

He has a reputation for being a tough son of a bitch. He talked candidly about the time he was the captain of the football team at West Texas State University. That team produced Dallas Cowboys RB Duane Thomas and Miami Dolphins RB Mercury Morris. Funk shared the field with future wrestling greats Stan Hansen and Frank Goodish (Bruiser Brody) as well.

“I was the captain on the team but I wasn’t as good as them,” said Funk, a hint of mischief in his voice. “I certainly couldn’t run as fast especially if I was carrying a bag of cocaine. Mercury did a hell of a run behind that house, he threw the bag in the water and it floated…after he got out of jail he certainly straightened his life out.”

These days fans are making news for getting involved in sporting events. Back in the day, wrestling fans did this routinely during Funk’s matches.

“I always considered that kind of a left-handed compliment,” he said. “I figured I did my job. I’ve been stabbed several times…I never once piled on any of them. I was doing my job in make believe. There was an extension of disbelief.”

Paradise Alley was a wrestling movie that Funk starred in with Sylvester Stallone. Sly had just finished Rocky and his career was hot. Over the years his height has always been a well-guarded secret. “Whenever he gets his bankbook out he’s as tall as he wants to be,” joked Funk. “Sly wasn’t a wrestler, he was a boxer. He stayed in good shape.”

WWE’s Vince McMahon is more than an owner; he is an owner that turned himself into a wrestler. What’s his secret?

“How can I sit there and say that Vince took steroids?” said Funk. “I know this for a fact. I don’t know if he took steroids. I know that the guy works out religiously and can he help himself to that extent, possibly. I don’t know. I haven’t looked at him lately. I haven’t had the desire to see him in his bathing suit.”

So many wrestlers have taken steroids over the years so one has to wonder if Terry ever tried the dangerous drug?

“I’ll tell you the truth. Yes I did take steroids,” he said. “I was in college at the time. This is the God’s honest truth. I was in college at the time and we had a pretty good team and we would go for a physical every summer or went to two-a-days … back then steroids were not illegal and one of the doctors said ‘hey we got this stuff called Dianabol. You wanna try it I got some free samples here?’ I took the samples for about three days… it was supposed to make you grow bigger and have more muscles…and I didn’t see any change and threw the stuff in the trashcan.'”

UFC has become a powerhouse in the entertainment field. They pulled in over $2 million dollars during a recent show in Vegas. They are a real threat to the wrestling industry as they are already stealing viewers and revenue.

“Ultimate Fighting is surging very fast and doing huge numbers. Yes there is a resurgence of a different style of wrestling and Vince had better certainly watch it and look out for it because it can surpass him very fast,” said a serious Funk.

Among upcoming bouts for Funk are a battle with Doug Gilbert on May 14 on a Southern Championship Wrestling show in Nashville, Tennessee, and the June 10th Hardcore Homecoming main event, pitting Funk against Shane Douglas and Sabu.