Fans of All Star Wrestling may best remember Neil Drummond as the loudmouth heel manager who terrorized many of the promotion’s top stars during the 1980s, but he’s literally done it all in the wrestling business, from selling programs to booking matches.

“I did everything in wrestling that you could want to do,” said Drummond in an interview with SLAM! Wrestling. “I was a fan, sold programs, distributed newsletters around the world, was a referee, was a heel manager, was a babyface manager, was a heel wrestler in a main event, was a babyface wrestler in a main event, and was a promoter and booker.” 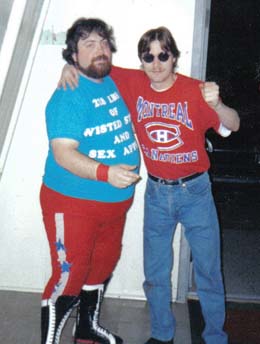 Before getting into the mat game, Drummond spent part of his youth in Golden, B.C., right in the heart of the snow-capped Rocky Mountains. Surrounded by equally imposing behemoths in the All Star locker room years later, Drummond must have remembered being amid something so much larger-than-life.

Stampede Wrestling rolled into Golden in 1972 and Drummond remembers sitting wide-eyed as Tor Kamata challenged Geoff Portz for the promotion’s North American title. Before Portz finally pinned Kamata’s shoulders to the mat that night, Drummond knew that he was hooked on the action and theatrics of professional wrestling. He tuned in faithfully every Saturday afternoon to watch the stars of two regional promotions, Stampede Wrestling and All Star Wrestling. When his family relocated to Vancouver in 1974, Drummond watched All Star exclusively, since Stampede’s television tapings didn’t hit local airwaves until 1982. He could often be found cheering the rulebreakers, drawing the ire of another local fan, Mike Olsen.

“I saw him at the matches, but didn’t think much of him because he cheered the heels and I was still a babyface mark,” said Olsen.

The two young fans frequently visited their local library to look up old match results and newspaper clippings on microfilm. “We had both been there many times before we knew each other, but we never ran into each other. One day, I introduced myself and we’ve been friends ever since,” said Olsen.

Drummond and Olsen started going to All Star matches together, and Drummond even convinced his new friend to enthusiastically cheer the promotion’s most despised grapplers. The two young men enjoyed inciting other fans by booing the fan favourites.

“It actually felt good to piss off the fans,” said Olsen. “One night, we took a Moondog Moretti fan club sign to the TV tapings and another fan tried to light it on fire.”

It wasn’t long before Drummond and Olsen were staging their own backyard bouts with a few of their friends, including Verne Siebert. The three of them dreamed of getting into the wrestling business, but Drummond was too small to wrestle. Olsen and Siebert learned the ropes under the tutelage of Terry Adonis and Rocky Della Serra, and Drummond sat in the crowd as his friends debuted in 1982. Watching Olsen (now billed as Stoney Edwards) and Siebert in the ring, Drummond knew he would have to find another way to break into the business.

That break came on November 3, 1984 in Cloverdale, B.C. Olsen and Siebert had been pulling double duty as referees and wrestlers as the promotion toured the province. A particularly grueling road trip had left Olsen too exhausted to work and promoter Al Tomko had no referees for the night’s card. Tomko knew Drummond through Olsen and Siebert, and agreed to let him officiate three of the evening’s seven matches. Drummond even took a referee bump that night in a match between Bill Jodoin and Moondog Moretti.

“My major challenge when I started refereeing was to get credibility,” said Drummond. “I was 24 years old and I was quite thin. BCTV studios didn’t like me on the show because I looked very young and, to them, I was not that credible. Al Tomko stuck with me, though.”

Tomko wasn’t the only one who recognized Drummond’s knack for officiating. Tim Patterson, an old friend of Drummond’s from All Star Wrestling, knew former star Red Bastien, who was working on setting up World Wrestling Federation shows. Patterson put in a good word for Drummond and Bastien booked him as a referee on a WWF show in Tacoma, Wash. in February 1986. Tomko called with the good news, telling Drummond to bring a light blue dress shirt and a pair of black pants to the show. Tomko neglected to tell Drummond that he needed to wear a black bow tie, like all WWF referees did at the time.

“I got down to Tacoma, naturally, all excited. Chief Jay Strongbow, who was the boss of that particular crew, asked me where my bow tie was,” said Drummond. “I told him that Al Tomko had told me that I didn’t need to have one. Luckily, Moose Morowski told them that I was a pretty good referee, so that smoothed things over.”

Drummond was the third man in a ring surrounded by 9,000 screaming WWF fans, a stark contrast from the handful of fans that packed the Cloverdale arena on a weekly basis. Dave Hebner instructed Drummond to officiate three matches on the card, including the first two bouts. Drummond will never forget the crowd’s reaction that night.

“I walked to the ring at the beginning of the show and the crowd went nuts, obviously not to see me, but because the event was about to start,” said Drummond. “It was a feeling that I can’t describe.”

For his work that night, Drummond pocketed $150. He also rubbed elbows backstage with stars like Randy Savage, Nikolai Volkoff, George “The Animal” Steele, Junkyard Dog, Adrian Adonis, Jimmy Hart, and Terry Funk, who Drummond calls “one of the most gracious people I had ever met.”

Meanwhile, back in All Star Wrestling, Drummond decided that he would be better suited as a heel referee. One night in 1986, without Tomko’s prior knowledge or approval, Drummond raised the ire of the promotion’s fan base with questionable calls favouring All Star’s rulebreakers. Luckily, the heel referee gimmick was a hit, and Tomko called Drummond in late 1986 with an interesting proposal.

“Al phoned me and said, ‘I’m going to turn you into a heel manager,'” said Drummond. “I had worked and waited a long time for this. Finally, I was going to make a name for myself. I had paid my dues.”

Starting in January 1987, a suit-clad, cane-carrying Drummond would accompany stars like Mad Dog Rex (Neil Carr) and Ole Olsen to the ring. He would later manage King Kong Bundy Jr. and Sir Joseph Cagle, two more of the promotion’s heels. Looking back, he admits that his microphone skills weren’t always his strongest asset. “I was pretty green on the stick, but became better as time went on,” said Drummond.

“Drummond was a good manager and he knew the roles of heels and babyfaces, which seems to be lost today,” recalled Siebert.

By the spring of 1987, Drummond had decided that it was time to change his gimmick. He tossed aside the suit and cane in favour of spandex, makeup, and a punk rock hairdo. The crowd ate up his new look.

“I received instant heat with this,” said Drummond. “Naturally, like most of the boys, I preferred to be a heel, because you could really bring your personality out in the open. It was much more fun.”

The reaction to Drummond’s new persona was so strong that it was only a matter of time before the crowd demanded to see him in the ring against All Star’s fan favourites. In a televised match in July 1987, Drummond made his in-ring debut, defeating Dale Houston. He became embroiled in a feud with Diamond Timothy Flowers for several months before joining the ranks of the fan favourites in November 1987. On January 2, 1988, Drummond wrestled rulebreaker Jonathan Sayers. Newly turned heel manager Mauro Renaldo officiated the bout, which saw the two rivals brawl all over the arena, plastering each other with chair and bleacher shots. Drummond lost the match but won over the hundreds of fans in attendance, including two of his biggest fans.

“My parents were there to watch me wrestle, and I wanted to give everything I could,” said Drummond. “That was my favourite night ever in wrestling.”

Despite drawing well that night, Drummond felt that Tomko had shortchanged him, so he left the promotion for three months. He returned in March of that year as a manager who occasionally wrestled. In 1989, Drummond took over Tomko’s duties as All Star’s booker. One of his first moves was to pit the company’s rulebreakers against each other. Drummond turned Timothy Flowers and Dan Denton on each other, an angle he admits was “good, but drew only average.” The feud took an interesting twist when Drummond turned Michelle Starr against Ivan Gorky and Jonathan Sayers against Mauro Renaldo, aligning Renaldo with Flowers and Starr while Sayers allied with Gorky and Denton.

“The series of matches were very good,” said Drummond. “However, at the time, the same wrestlers had been around for quite a while, and it was getting hard to draw.”

Sagging attendance eventually led to All Star Wrestling’s final show in Cloverdale in June 1989. For Drummond, it was a fitting place to end the promotion’s lengthy run, since he made his debut in the same arena five years earlier. One month after All Star’s final show, Drummond and his partner, Fred Roselli, went out to dinner with announcer Ed Karl and a producer from BCTV and discussed ways to revive the promotion.

Drummond wanted to emulate the popular Memphis wrestling shows that had viewers flocking to their television sets. He and Roselli pitched the concept to other television executives without success, prompting Roselli and Rocky Della Serra to re-launch the promotion without a TV deal. When that failed, it was the final nail in the coffin for All Star Wrestling. Drummond appeared at a few shows during the 1990s with Ivan Gorky and Mike Olsen, and performed for the last time in a battle royal in Quesnel, B.C. in 1996. He fondly recalls his days in the wrestling business and credits his success to a combination of intelligence, timing, and good gimmicks. Mike Olsen is quick to praise his childhood friend as a man ahead of his time.

“Definitely, Neil’s brain was his biggest asset and contribution to our business. He could come up with scenarios and angles as well as anybody,” said Olsen. “We made a pact that we would both be in the business one day, come hell or high water, and we did.”

Drummond has worked in the financial industry since leaving the wrestling business, and is currently an RRSP department supervisor at a Vancouver brokerage firm. Many of his work colleagues still recognize him from his wrestling days. To this day, many of Drummond?s strongest bonds were forged during his foray into wrestling.

“Like most promotions back in the old days, all of the boys looked out for each other and many friendships arose,” said Drummond. “I was lucky to be there at the right time and right place on many occasions. What more could I ask for?”