CALGARY – It isn’t a secret, but it became official today. WWE RAW is coming to Calgary May 30th, and the WWE held an interactive press conference for media and hundreds of fans to give the news. Fans jumped to their feet when WWE stars Chris Benoit, and Batista entered the Avison Young club at the Saddledome. 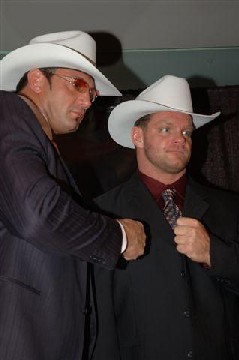 Batista and Chris Benoit at the WWE Press Conference. – photo by Bill Cubitt

“It is truly an honor and a privilege each and every time I come to wrestle in Calgary. This is where I started and where my heart is. I am very fortunate to have travelled the world in my 19 years, and wherever I go, the city of Calgary and wrestling are synonymous, which makes me that much prouder to say I started here,” Benoit told the fans. “I am looking very forward to coming back in May and bringing you the best wrestling anywhere in the world. To be part of the WWE and to be bringing this show to Calgary, it is all of us in the WWE thanking you the fans for the support. We as a company, and I as an individual believe the greatest wrestling fans in the world are right here in Western Canada.”

“That’s a first one for me,” an amused Batista said, asking him to at least get on his knee. When Neshine did, Batista responded, “You’d better make a good living. You’re a good looking guy and all, but I am not ready to swing that way partner.” When another fan challenged him to a fight, he laughed and said, “Now that I can do!”

“I just got back into watching a year ago, I saw Batista and when I saw him do the Batista-bomb to HHH I thought ‘I would love to be beside that guy for a long time.’ He is a serious role model, same with Benoit they are great guys and I look up to them a lot,” Neshine told SLAM! Wrestling, before clarifying “I am not gay.”

Tourism Calgary’s Marge Gudmunson made both wrestlers honorary Calgarians with the traditional White Hat Ceremony. At first she joked that each man would have to ride a bull once around the ‘Dome, Batista seemed up to the challenge and shed his suit jacket, but both men were instead lead through a lengthy speech before donning the hats.

From there, the fans truly got to interact and ask questions of the two stars. Things started rocky, with a fan asking Batista “What will it feel like when you get your ass kicked by Triple-H at Wrestlemania?”

“How is it going to feel in about two minutes when you get your ass kicked?” Batista replied.

Many fans took advantage of the chance to ask their fellow Albertan about his career. While many wrestlers have released autobiographies as of late, Benoit feels there are still a few chapters to come before he is ready to write one. Many fans asked about Benoit winning the WWE championship 357 days ago at Wrestlemania 20.

“It was tremendous, it was the defining moment of my entire career. After I won the Royal Rumble last year I had the opportunity to go after a title that I could call myself champion with. It is the biggest title and HHH is a great champion. If I were to pick a moment that would say ‘This is Chris Benoit’ that would be it.”

Batista pegged that match as one of his favorite moments in wrestling.

“It was so awesome and emotional to see Chris win the WWE championship last year. There was a moment where he was in the corner pumping the belt, you could see how emotional he was. It chokes me up a bit just talking about it. Moments like that are special.”

DeMarco had touched on the rich wrestling history in Calgary, and Benoit talked about how much he owed to Alberta’s wrestling legends.

“It is an honor to say I was trained in the Dungeon. Stu Hart was a man who gave advice and lived his life as he spoke it. He was an inspiring person. If Stu hadn’t been in my life I wouldn’t have had nearly the career I have had. People ask me about guys like Brian (Pillman) and Owen (Hart), I have been so fortunate in my career to have these people in my life and their influence.”

After the Q&A session, fans lined up and everyone went home with an autograph. It was evident that despite the busy schedule — they immediately headed to Victoria after the event — they loved every moment of it. Their desire to entertain fans will be on display May 30th when RAW comes to Calgary.

“Calgary is a fantastic city with great fans and wrestling heritage and we’re always excited to be here. We expect to have a great night on May 30th!” DeMarco concluded.