Once upon a time, in a land not so far away, there existed a great wrestling organization that was on top of the world. Everything seemed right in this organization form the magical world of Turnerland, but just as quickly as it rose to the top, it fell. 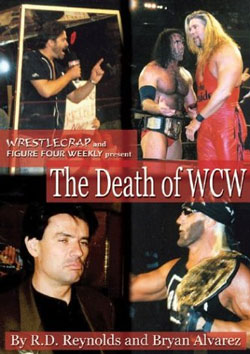 Now, thanks to ECW Press and two of the Internet’s biggest wrestling writers, Bryan Alvarez and R.D. Reynolds (aka Randy Baer), wrestling fans can re-live this seemingly unbelievable tale of the rise and fall of World Championship Wrestling.

The book, entitled The Death of WCW, looks at the entire run of the relatively short-lived organization that arguably had the most colourful history of any wrestling organization. Everything is discussed from the split from the National Wrestling Alliance to the McMahons’ purchase of the company in 2001 and everything in between.

As one would expect, the highest concentration in the book centers on the mid 1990s when the company was at its peak and it’s very quick demise. Alvarez and Reynolds take an extremely detailed look at the company, even going so far as to look at week-to-week episodes of Nitro, Thunder and all the politicking that happened behind the scenes on given shows.

The authors do an incredibly good job of keeping the focus solely on WCW, especially during the Monday Night Wars. There is very little mention of WWF goings-on, outside of talent shifts and any WWF points that came up on WCW programming, such as the Vince McMahon match challenge and Mick Foley’s title victory. Being able to keep the two organizations separate makes for a much better read.

While some fans will inevitably think to overlook the book because so much of WCW’s history was well documented, there is a lot of information in the publication that fans may not immediately recall, such as Chris Benoit and Booker T’s TV-title exchanges on house shows and Bill Goldberg’s destruction of a limousine that resulted in one of the most gory moments in wrestling TV’s history. The writers have definitely taken steps to ensure that as much of the story of WCW is recorded.

There are, however, two glaring omissions from the book. First is the splintering of the nWo into factions (black and white, red and black), which was the first time the nWo really showed signs of the gimmick dying to the average WCW TV viewer. The second point was the ECW talent raid. While Raven is mentioned briefly, other ECW pick-ups like Sandman are glossed over. There’s also barely any mention of Benoit, Dean Malenko and Eddie Guerrero all moving to WCW, which was a big hurt to ECW at the time.

While these omissions are noticeable, they do not detract from the overall book, which is definitely worth picking up. The two authors write so seamlessly that you can’t tell who is writing which section, which is always a plus on a collaborative effort. Be sure to pick up The Death of WCW today.