Foley busier than ever

For someone who’s semi-retired, Mick Foley is busier than ever. Between wrestling-related appearances, writing a new book, and preparing for his newest venture, a radio talk show, he even had to cut short his recent family vacation. Despite this hectic schedule, however, he’s not tired of life in the public eye just quite yet.

“I’ve had an easy segue way from full-fledged wrestler to retired guy,” he told SLAM! Wrestling in an exclusive interview. “(Right now), I can do anything I like.” 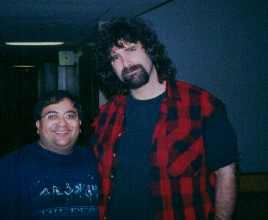 “Bloodthirsty” Bob Kapur and Mick Foley at the Appreciation Night for Sabu.

“Anything” includes appearing at the recent Appreciation Night held for Sabu in December. Foley felt quite honoured to be part of that special event, since it went to a great cause: a fellow wrestler who, along with Foley, is considered a true hardcore icon.

“I can understand what it’s like to suffer a devastating setback,” Foley said in explaining why he went out of his way to attend the show. “Many people are surprised that I didn’t suffer a devastating setback during my career.” Given what Foley survived during his storied career, it is short of miraculous. Still, despite the risks, he doesn’t necessarily advocate the abolition of hardcore wrestling.

“I think there is a place for hardcore wrestling, definitely. But you have to create the need for it again. We, meaning the wrestling business, may have overdid it for a while, to the point that “hardcore” became comedy. But I think when it’s done the right way that it’s still effective. But there are elements of hardcore wrestling that are evident in a lot of styles. Terry Funk taught me that hardcore isn’t only about tables and chairs; it’s about giving that extra bit of effort for the fans whether you’re injured or tired, and that description is still appropriate today.”

Using that description, one could also say that Foley is equally hardcore about his writing. Besides his two best-selling autobiographies, he’s also written three children’s books, including his latest literary offering, Tales from Wrescal Lane.

“I think it’s a great children’s book,” says Foley. “Of all of the ones I wrote, I think this one is the best. The fact that it’s selling by far the least doesn’t really bother me. I did the best I could, and I can’t force people to buy it.”

Even though the sales of Wrescal Lane haven’t been as brisk as for his other books, Foley is not discouraged. In fact, he has another book coming out in the fall. Though he didn’t divulge much about the plot, he did note that it will not be as dark as his previous novel, Tietam Brown.

“A lot of people liked Tietam Brown, but it was a little twisted and certainly wasn’t for everybody.” Notwithstanding its depressing story, Foley believes that the book has great Hollywood potential.

“My feeling is that some actor, whether a year from now or 10 years from now, will want to come along and want to play the dad. It doesn’t have ‘summer blockbuster’ written all over it, but there are some great roles for a couple of actors within that book.” In that light, Foley has had a couple of conversations about movie rights to the book, but those talks are very preliminary on that front at this time.

What is definite, however, is the upcoming launch for Foley’s radio show, which will debut on March 8th. Doing this show, he says, is a natural extension to some of the speaking engagements that Foley has been going on in the past year. “(I’ve done a few talks) with high school kids about the importance of an education, (and a few) college appearances where I talk to a group of students about a variety of topics. The radio show will be a general topics show, which will include politics and other current events.”

At the time of this interview, Foley wasn’t sure what markets will carry the show. So whether Canadian fans will be able to hear it remains to be seen.

However, that doesn’t necessarily mean that they won’t be able to get their Foley fix altogether. On the contrary, he has been pretty visible lately on a few wrestling-related fronts. In addition to the Sabu tribute, Foley made some notable appearances recently at shows for the Ring of Honour promotion. In addition, he’s scheduled to appear at the next Border City Wrestling show in Windsor, Ontario on January 21st.

Of course, WWE fans saw much of Foley this year, as he participated in a well-executed program with Randy Orton, and just recently appeared on the Christmas in Iraq edition of Smackdown.

Though Foley is no longer officially contracted with WWE, he is sure that he will make some more appearances over the next year, despite his otherwise busy schedule.

“(I have a) great relationship with WWE. It’s nice to be able to pick up the phone and see that the company has room for me. I don’t miss being on TV regularly, because I know it’s always there if I want it. I don’t think I’ll ever be back to 100%. But I did feel pretty good when I made my comeback (against Orton). I dropped a little weight (at that time), which I’m slowly putting back on. So I may have to do a match a year, solely to keep my weight in check.”