Up until Vince McMahon’s WWF forced most of the other promotions out of business in the late 1980s, wrestling had been a very territorial game. Recent releases in the publishing world are reflecting that interesting historical dynamic.

Instead of focusing on the national product, books like Bodyslams in Buffalo by Dan Murphy, the St. Louis-themed Wrestling At The Chase by Larry Matysik and the Los Angeles-based Richmond 9-5171: A Wrestling Story by Jeff Walton tell a specific tale about a small part of the bigger business. Older tomes like Jim Freedman’s Drawing Heat on the Bearman’s Ontario circuit, and The Wrestling, by Simon Garfield, about the British scene over the years, are equally relevant today because their focus never wavered into any bigger picture. 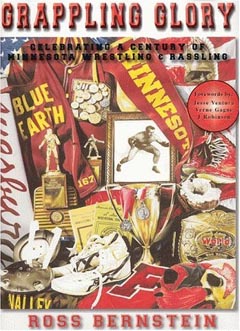 In all the above cases, the books were written by non-wrestlers, and therefore free of the biases and pettiness that can sometimes seep into the autobiographies of the behemoths who grunted and groaned for a living.

A new, worthy addition to the territorial publishing genre is Ross Bernstein’s coffee table book, Grappling Glory: Celebrating A Century Of Minnesota Wrestling & Rassling, a fascinating collection that marries the amateur and pro games without being insulting to either of them.

The northern state has a deep, rich wrestling history, and key to it all, of course, is the one and only Verne Gagne, who fits beautifully into both halves of Bernstein’s book. Gagne was a champion amateur in high school and a star football player. At the University of Minnesota, he excelled in both sports, even with a two-year stint in the Navy. Then in 1948, he was a member of the American Greco-Roman wrestling team for the Olympics in London (but the powers that be pulled the team from competition at the last minute). Then he turned pro, and made a name for himself on TV before settling down in 1960 to run the Minneapolis promotion, which eventually became the AWA and ran until 1991.

Stories from Gagne and about Gagne percolate throughout the volume, and he holds the book together in more ways from one. Right from the get-go, in the foreword by former governor Jesse Ventura, Gagne is in the picture. Appropriately, Bernstein closes the book with afterwords by Gagne and amateur wrestler and coach J Robinson.But the book is about much more than Gagne too. Bernstein takes the reader through the history of high school, college and university wrestling in the state, filling the pages with many photos, stories, biographies, charts and lists. His take on women’s amateur wrestling and the challenges it faces was particularly interesting.

Grappling Glory sums up the Olympians to emerge from Minnesota as well before turning its attention in the second half of the book to professional wrestling.

Bernstein’s history of pro wrestling in Minnesota is very thorough and makes for a great read. But then he gets to the meat of the book for fans of the squared circle — his “Cast of Characters.” The best biographies are the people he tracked down and interviewed, names big and small like Greg Gagne, Stan “Krusher” Kowalski, Buck Zumhofe, Steve “O” Olsonoski, Ken Patera, Scott Irwin, Baron von Raschke, Brad Rheingans, Jim Brunzell, Kenny Jay, “Mean” Gene Okerlund and Adnon Al-Kaissy. His biographies on oldtimers like Bronko Nagurski and Leo Nomellini definitely benefit from Bernstein’s previous book on Minnesota football heroes.

The piece on Eddie Sharkey (“Eddie Sharkey is a Minnesota grappling legend. Period. And his story is as fascinating as he is.”) is terrific, and Bernstein gives a well-balanced account of the lives of both Larry “The Axe” Hennig and his late son, “Mr. Perfect” Curt Hennig. (The Axe’s sidebar story on Haystacks Calhoun is a hoot.) Other late stars like Dean Peters (Brady Boone), Rick Rude and Scott Irwin are profiled as well.

For today’s fans, he details the amateur and pro days of Shelton Benjamin and Brock Lesnar, as well as recent well-known grapplers like Jerry Lynn, X-Pac (Sean Waltman), Lenny Lane, Molly Holly and Scott Norton. Unfortunately, however, he was unable to secure interviews with the more recent vintage stars, which perhaps would have given the book a little more anchor to the fans who got hooked during the Monday Night Wars.

The author doesn’t stop at just the wrestlers either, and profiles personalities like Wally Karbo, Gordon Solie, Mick Karch, Eric Bischoff, Jeremy Borash, and Goldylocks who come from Minnesota, along with historians and writers like George Shire, Norm Kietzer, Ray Whebbe Jr. and Steve Anderson. (Leaving out Jim Melby is a crime, however, and Wade Keller of the Pro Wrestling Torch should have made it in there somewhere too.) The interview with boxer-turned-wrestler Scott Ledoux brought back some fun memories of the last, desperate days of the AWA. The book isn’t perfect. The Table of Contents is pretty useless, and doesn’t point you quickly to the biographies on various wrestlers. Then the bios themselves aren’t in any specific order, not even alphabetical. Not being a true, hardcore fan, Bernstein’s take on various aspects of pro wrestling lore is simplistic at times (which also makes it refreshing as well). He lists titles won by the pros as if they all have equal meaning, when being Central States tag champion never compared to being a tag champion in the AWA. Grappling Glory is also “extremely positive in scope” (as warned on the flap), which makes it a bit of a kiss-up at times, and it shies away from any negative rumors or even facts. For example, Ken Patera is interviewed, but never discusses his jail time or asked why he and Mr. Saito destroyed a McDonald’s and resisted arrest.

Yet none of the above flaws are enough to prevent the recommendation of this book. Hopefully, it might spur a few other authors and publishers out there to turn their attention to the smaller, more approachable subjects of territories.