Over the course his wrestling career, Shane Douglas has done it all. He’s won countless championships, both on his own and with others. He’s been worshipped as the Franchise and swam in the cheers; and he’s been humiliated as the Dean and drowned in the boos. He’s spoken up and been pushed down, and he’s climbed his way back up. He’s learned a lot during his 20-plus years in the business. And now, as one of NWA-TNA’s backstage agents, he’s passing on those lessons to the future generation.

“The nice part about my career right now,” he told SLAM! Wrestling recently, “is that I can select when I want to get in the ring and when I don’t. Right now, I don’t gauge my success by my in-ring performance. I gauge my success by how well I perform my role wherever it may be, whether as a backstage announcer or as an agent. For the next two, five, ten years, I would be proud to continue doing what I’m doing: teaching kids how to be better performers.”

Many would agree that Douglas has the right credentials to impart that kind of lesson, given that he’s been learning from, and with, some of the sport’s biggest names. In the mid-’80s, for example, he trained under Dominic DeNucci with fellow future superstar Mick Foley. In his book Have a Nice Day, Foley credited Douglas as being a major help in his graduating from DeNucci’s school.

Years later, while he was in WCW, Douglas benefited further from the teachings of two of the sport’s all-time greats. 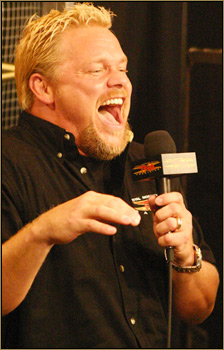 “Ricky Steamboat and [Arn] Anderson were two of the only guys who were gracious enough to teach a young punk like me. I was capable of doing the moves physically. But I didn’t know when to do them and when not to do them, and piece them together in a way that makes sense. Being paired with Steamboat was a tremendous opportunity for me, because he took the time to teach me (how to do that so as) to give maximum entertainment value for the fans.”

Eventually, Douglas took his mastery of fan psychology, and used it to help Paul Heyman convert a small regional company, Eastern Championship Wrestling into Extreme Championship wrestling, the mecca of hardcore wrestling. Douglas looks back fondly on those years, and one gets the sense that he couldn’t be more proud of what he and the others accomplished back then.

“ECW was truly special, and the success we had back then, it would be hard to duplicate. Its success wasn’t built just on Paul Heyman’s booking, or the matches he put together, or the style in which they were booked. It was the chemistry, the synergistic relationship between the fans and the wrestlers.”

Though Douglas was known as the “Franchise” of ECW, he is quick to share the honour with everyone else on the roster, noting that all of them were essential ingredients in the company’s winning formula.

“As champion, I was the central focus of the storylines. But the company was built on the foundation of (people like) Sabu, and Tazz, and The Sandman, and Tommy Dreamer, and Terry Funk, and a litany of others. I honestly believe that if you took any one of those names out of the equation, the company probably wouldn’t have had the success that it had.”

Years after the company’s demise, Douglas is still proud of what he and the others were able to do. And doesn’t seem optimistic that efforts to revitalize the company, even for a single pay-per-view event as is rumoured to be in the works, would do the company justice.

“Besides,” he added, “I’ve been able to fulfill a lot of what’s missing in my life from ECW (by being involved in) NWA-TNA.”

As a road agent for the company, Douglas plays an instrumental role in helping instruct the wrestlers on many aspects of life in the sport, not the least of which is the in-ring psychology.

“I don’t think that psychology is prevalent in the business at all today. And there’s definitely room in any locker room for a guy like me, someone who has spent his career learning that psychology. A lot of times people will tell you that you have to tell a story in your match … that it’s the holy grail of this business. But then nobody tells you how to do it. So when I give some advice to the kids in the TNA locker room, and I see them really put that advice to use in the ring, those are my proudest moments right now.”

Douglas is very proud of what TNA has accomplished as a company so far, but believes that the best is still yet to come.

“TNA is at a launching point right now. It’s been going for two years now. But this is the real start for the company. If you take a look at the product a year ago compared to today, people will tell you that it’s exponentially much better than it was then.”

Fans will get another chance to see this for themselves this weekend when Final Resolution, the company’s third major event since moving to monthly pay-per-views, hits the airwaves.

Douglas is confident that fans won’t be disappointed with the show, as they may have been, say, with the WWE’s latest offering. And he suggests that this Sunday might be a good opportunity for fans to consider watching TNA to compare both alternatives.

“I feel like I’m always talking bad about Vince,” Douglas said, almost apologetically. “I don’t mean to. Or to talk bad about his product. I’m just calling a spade a spade the way I see it. And I think the numbers bear out what I’m saying. About ten million fans have tuned out in the past five years. Where’d they go? They didn’t drop dead or fall off the face of the planet. They stopped watching that product because they don’t like that product. That’s where TNA comes in.”

Viewers who do tune in to Final Resolution, Douglas says, can rest assured that everyone on the card, from top to bottom, will do every thing they can to deliver the viewers their money’s worth. He’s helped instill that sort of work ethic into the company’s younger stars, and he beams like a proud parent when talking about how much of that lesson they’ve taken to heart.

“A year ago, they would go out and execute move after move after move. And the matches were like fireworks — people would ‘ooh’ and ‘aah’, but there was nothing that made them want to come back the next time; they had seen it all. But now, they’re going out and executing moves at the right time, and they make the crowd stand up on their seats, and then sit back, and then stand up again. That’s the psychology coming in. That’s more than just fireworks. That’s getting the crowd into the show so much that they’ll be happy to come back and buy a ticket or order the show the next time.”

“I’ve never been a drug addict, but I imagine that the high that somebody gets from heroin or cocaine or alcohol can’t compare to the high that you get when you’re performing in front of that crowd, and the crowd is on their feet chanting ‘ECW’ or ‘TNA’ or ‘Best match ever’ or what have you. For me, at this stage of my career, I get that high when I give a young kid some advice about their match, and see that the next time they’ve incorporated that advice, and the performance is better than the last time.”

As a teacher, it’s all that Douglas can hope for. And though his legacy will be remembered for much more than his mentorship to the new generation, one gets the sense that Douglas wouldn’t be entirely disappointed.

“Having been around the world, and wearing Rolex watches, and driving expensive vehicles — that’s the nice side of our business. But being recognized in the business as being someone who was a good performer and entertained the fans or being the character who the company was built around, that’s the real important stuff. The watches and cars are a great perk of the job. But the real present is when you can go out and people recognize you as being someone who can entertain the hell out of them. That’s where I get my reward.”