Memories abound at Titans in Toronto

It was a wonderful night of mat memories yesterday at the Titans in Toronto dinner, held to raise funds for and awareness of the Pro Wrestling Hall of Fame in Schenectady, New York. 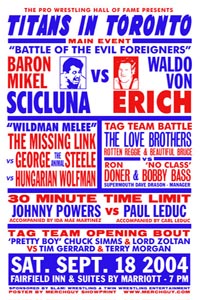 The poster for the event. -www.merchguy.com

Over one hundred wrestling fans were on hand at the Fairfield Inn and Suites Marriott in Mississauga to celebrate the sport and pay tribute to the many Canadian wrestling legends who paved the way for the stars of today. For the wrestlers, it gave them the opportunity to reunite with long-time friends that they had not seen in many years, swap stories of days gone by, and meet with the next generation of wrestling fans. It was the first such event held in Canada, but judging from its success, it will definitely not be the last.

WWE legend George “the Animal” Steele acted as the Master of Ceremonies, and kicked off the night with a laugh by storming the stage, knocking over the podium, and grabbing one of the event’s organizers, Andy Stefanides in a headlock, before his opening comments.

“(Wrestlers) are like a family. The guys up here are like my family, we travelled together for years. But after it’s done, we may never get a chance to see each other and talk,” Steele said. “Thank you, Toronto, for putting on a night like this, so we can see our families again. And thank you for supporting the Hall of Fame, a place that (pro wrestlers) can finally call ‘home.’”

His comments were echoed by all of the legends at the head table, who included Dewey “The Missing Link” Robertson, Waldo von Erich, Baron Mikel Scicluna, Johnny Powers, Reggie Love, Bruce Swayze, and Willie “The Wolfman” Farkus. After dinner, each of them was asked to tell some road stories and offer their thoughts about the Hall of Fame. Each of them reminisced about the good times they had on the road, playing jokes on one another while driving from city to city, and show to show.

The wrestlers also reflected on many of their friends in the business that had passed away. A traditional 10-bell salute was given to recognize those who we lost in 2004, including Toronto’s own Jack Tunney.

“A lot of times,” Steele said, “when a wrestler dies, his family takes his clothes and gimmicks, and cherish them for a year or so before everything goes into the ashcan. Now, all that stuff can go into the Hall of Fame, so that people can remember those guys forever. That’s the reason (the Hall of Fame) is so important.”

Before and after the dinner and speeches, the wrestlers mingled in a reception area, where fans could collect autographs from and take pictures with all of the wrestlers in attendance. Smiles, hugs and handshakes filled the room as people got to meet their heroes and thank them for entertaining us for so many years.

Scicluna, who wrestled in the 1950s particularly enjoyed this part of the evening. “Without the fans, there would be no wrestling business. I’m very happy to see so many people support the Hall of Fame, and support the wrestlers,” he said.

Fan Shuhei Aoki, who flew in from Los Angeles to attend, was also thrilled with the opportunity. “I wanted to meet Johnny Powers,” he said after posing for a picture with the famed grappler, “since he was very famous in Japan. So I’m very happy that I came tonight … I’m having a very good time.

Robertson, who also wrestled as The Missing Link in the day’s earlier event, a free show at the Galleria Mall put on by Toronto promoters Page and Jian Magen, shared Aoki’s view, despite some earlier reservations.

“I wasn’t sure that this would work, or that people would understand what the Hall is all about,” he explained. “I’m glad, though, after seeing this big turnout, that this has been a huge success. I’m a proud Canadian, and to see the Canadian fans support the Hall, that’s very special to me. It was a great night.”

NOTE: We’ll have more from Titans In Toronto in the upcoming days, including photos and interviews with the headliners from the afternoon show: Al Snow, “Grandmaster Sexay” Brian Christopher and D-Ray 3000.

For more information about the Pro Wrestling Hall of Fame, visit WWW.PWHF.ORG.

“Bloodthirsty” Bob Kapur plans on going to Schenectady one day. Not only to visit the Pro Wrestling Hall of Fame … but also just because he likes to say the word “Schenectady”.