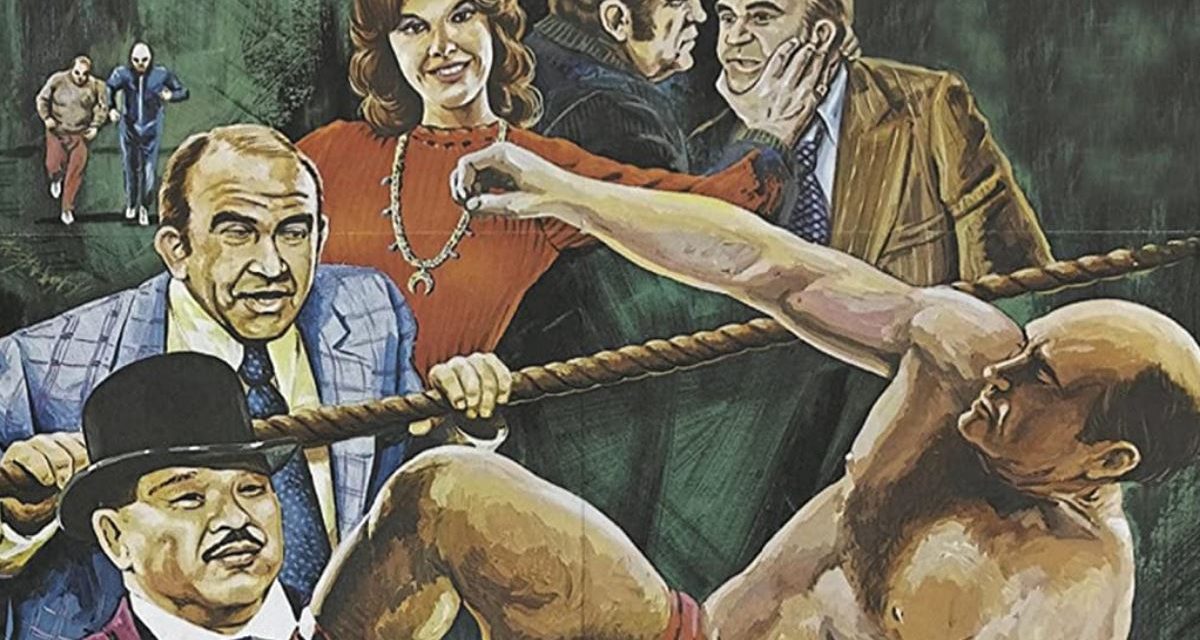 A wrestling promoter turns his back on the company’s aging champion, and instead puts all of his promotional power behind a young up-and-comer. Sound likes a storyline that one might see on Raw or Smackdown, doesn’t it? But it’s also the plot of The Wrestler, a movie that some historians call one of the best movies ever made about the sport. SLAM! Wrestling talked with two of the movie’s stars — wrestling legend Verne Gagne and TV icon Ed (Lou Grant) Asner, to discuss this one-of-a-kind film.

Released in 1974, and currently available on video and DVD, The Wrestler tells the story of wrestling promoter Frank Bass and the struggle he has in trying to wrest the title away from the company’s champion Mike Bullard, played by Gagne. Bass, portrayed by Asner, would prefer that Billy Taylor (real-life British wrestler Billy Robinson) wear the belt and represent his company in the upcoming “Superbowl of Wrestling”, a tournament pitting the champions of the various regional promotions against one another. 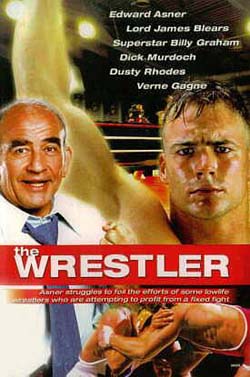 Of course, this wouldn’t be a problem in real life — after all, the promoter could simply write an angle where Bullard drops the belt to the youngster. However, the movie was made during the time when the industry was still very protective of its scripted nature. So rather than expose the secret world behind the scenes, the movie depicts the “kayfabe” world of wrestling. In other words: the events going on are real. So when Bullard ducks the match against Taylor by claiming he’s injured, there’s little that Bass can initially do about it. Ultimately, he makes the match, but only after pulling a power play on Bullard; he embarrasses him on TV by calling him a cowardly champion, and threatening to strip him of the title. Bullard agrees to go through with the match, even though everyone doubts he can beat Taylor.

The climax of the film comes when the two finally square off in the ring. The match goes on for a little while before Bullard goes for his big finishing move, the flying dropkick, which should put Taylor away for good. The camera zooms in for a close-up on the bottom of Bullard’s boot, which is heading straight for Taylor’s face… and then the film comes to an abrupt stop, making it one of the most open-ended movies since Butch and Sundance jumped off the cliff. The viewer has to guess what happens next. Does Bullard land the kick and go on to win the match? Or does the young lion Taylor retire the wily veteran and bring some new blood to the “Superbowl”? Though neither Asner nor Gagne had the answer to that question, both of them had other memories about the making of the film.

For Gagne, the experience was both positive and negative. As executive producer, he took on a lot of the risks associated with making the film, despite not necessarily understanding the intricacies of the Hollywood machine.

“Nobody had (done a movie) on wrestling in quite a while,” Gagne recalls. “So I thought it might be a good idea. We had enough TV exposure around the country that we could plug it. I put the most money (into the movie) than anybody — I had a little over 50% of it. Financially, it wasn’t my biggest success … I never saw any money out of the thing.”

Still, despite the financial results, Gagne did achieve one of his goals — raising awareness and appreciation of the sport generally. Throughout the movie, wrestling and wrestlers are held in the highest esteem. In one scene, a newspaper reporter dismisses the in-ring death of a wrestler as unimportant, telling Bass that wrestling belongs in the theatre pages and not the sports section. Bass passionately defends wrestling, detailing the history of the sport, and lists the names of real-life wrestlers who died in the ring, arguing that they deserve tribute as well. “You don’t want to write about the sport,” Bass tells him, “because you don’t understand it.”

Asner himself left the movie with a new-found understanding and respect for wrestling — and the wrestlers he got to work with.

“They were wonderful guys,” he recalls. “Kind and considerate, very professional. And what struck me is that they were such superb athletes. I had some muscle back then, but I was around all these guys who could swat me around like a fly.”

The movie was filmed in Gagne’s stomping grounds of Minnesota, and includes cameo appearances by several Hall of Famers who were in the territory at the time. Historians will be interested in seeing Dusty Rhodes and Dick Murdoch (the two get into a bar brawl in one of the movie’s more funny moments), Larry “Pretty Boy” Hennig, Wahoo McDaniel, and Jim Brunzell during their younger years. It was a hectic time for all of the wrestlers involved, Gagne remembers.

“During the filming, we were also wrestling and jumping all around the country, coming back the same night to Minnesota, and going to work on the movie the next morning. It was a lot of hard work, doing the movie and trying to keep the wrestling business going at the same time. We were really juggling things in the air.”

Gagne credits Asner a lot in helping him keep things on track on the set, often working with the wrestlers on honing their acting skills, and generally helping them adapt to life on a movie set.

Not that Asner had a great deal of experience himself in that arena. Though he was one of TV’s most recognized stars, starring in The Mary Tyler Moore show, The Wrestler was one of Asner’s first movie roles. Not really a wrestling fan — though, as a kid, he did go to some matches with his father — his interest in making the movie was more for building his resume.

“I was relatively new to TV, and was eager to make a name for myself in the movies. The offer came around, it seemed like a decent enough role, a decent enough script, so I went for it,” Anser says.

He is quick to return Gagne’s compliments, maintaining that it was the talent and professionalism of the wrestlers that made the shoot go smoothly.

“The wrestlers didn’t have Hollywood experience, but they still held their own. They played roles they were comfortable in. They did stuff they knew, and stuff they could do, and they did it well.”

Of course, it wasn’t all routine for the wrestlers. The filming sometimes required them to “break kayfabe” during a match — again, something that was not normally done in that era.

George Schire, long-time Minnesota superfan, was lucky enough to be in attendance to witness some of that occur. “I was at the match tapings at the old St. Paul Auditorium in 1973,” he reminisces. “They would fill the auditorium with artificial smoke, to make it look like a typical smoke-filled wrestling arena. When they were filming the Gagne vs. Nick Bockwinkel match, Verne hit Nick with a dropkick that really connected, and just about knocked his head off. They had to stop filming for a bit until Nick was okay. Then, when it was time for Verne to put his sleeper hold on Nick, Bockwinkel told the crowd that that would be the only time he would ever sit down for Gagne. It was also fun to see what they did with the death scene match, when Ray Stevens killed Jack Cutter (played by Joe Scarpello) with his ‘Bombs Away’ jump off the top rope. They had to re-do the scene about three times to finally get it the way they liked it.

Although this experience gave Schire, and the other fans in attendance that night, a small peek through the veil of wrestling, Gagne didn’t really “smarten up” Asner about the business, nor did any of the wrestlers. Asner confirms this, noting that the wrestlers were overall very good about protecting the industry.

“It was unbelievable,” he says. “It’s like a secret world, a very closed society. They have their own code, a language like carny speak, and they would resort to using that at times. I found it very intriguing. It really was a fascinating world to be in.”

It’s a world that Asner won’t rule out visiting again if, he says, the script and the role are interesting. But it’s safe to assume that if he does, it won’t be in the Frank Bass role. Indeed, we may never know what happened to Bass and Bullard after the cameras stopped rolling — since, according to Gagne, there are no plans to do a sequel.

For some people, this news may not be too disappointing; for example, Marc Thibideau, who panned the movie in a 1975 issue of Wrestling Monthly. “Anyone wishing to see it,” he wrote at the time, “should not expect a cinematic gem. The plot lacks in excitement and imagination (and) often lags, hindered by an inane script.”

However, other critics like Andy Bator, whose review appeared alongside Thibideau’s, were able to appreciate the film regardless of some of those flaws. “There is a little bit for everyone here,” according to Bator. “(The movie is) some good clean fun.”

Where both writers did agree was in their praise of the performances put on by the wrestlers in the movie. Thibideau was particularly impressed by Billy Robinson. “Not only does (Robinson) provide spectacular action in the ring, he shows excellent acting talents,” according to Thibideau. “(He) really shines and brings out much of what wrestling is all about.”

And both writers did acknowledge that the movie was useful in introducing wrestling to a brand new, mainstream audience. Bator credited the film with “(depicting a) side of wrestling no one knows about.” Thibideau himself expressed hope that the movie would be only the first step in that direction. “Perhaps now the Hollywood moguls will realize the vast potential inherent to the oldest and most exciting sports spectacle.”

Thirty years later, it’s difficult to say what impact, if any, The Wrestler really did make on the professional wrestling industry. But for Gagne and Asner, it doesn’t really matter; for them, their memories are what count.

More details: The Wrestler was directed by Jim Westman and runs 95 minutes long. The DVD edition (full-screen) includes limited extra material — a biography on Verne Gagne and Ed Asner, and a short interactive quiz about the events in the movie.

Bloodthirsty” Bob Kapur has been writing for SLAM! Wrestling since the late 1990s. He reminds you to check out Ed Asner’s new show, Centre of the Universe, which debuts later this month on CBS.

Greg Gagne shares AWA stories at screening of The Wrestler