There is no way to understate what Jim Barnett meant to the wrestling business. The flamboyant, creative genius, who died Friday, September 18, 2004, at 80 from pneumonia, has been credited as the man who created the studio wrestling show. But he also ran a series of promotions in the U.S. before launching the glory days of Australian wrestling with Johnny Doyle, was instrumental in the first three WrestleManias and consulted for both WCW and WWF over the last number of years.

James E. Barnett was originally from Oklahoma City. He got involved with pro wrestling in Chicago with Fred Kohler when it was shown on the Dumont Network. With his masters degree in business, he proved to be a valuable ally to Kohler, a wrestler-turned-promoter, especially in television negotiations. The stories of Barnett’s look and act abound in the business. 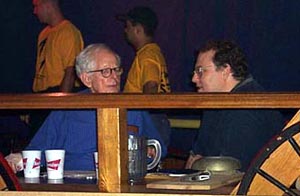 “Barnett, an exiguous individual, was probably saved from utter physical destruction by his diminutive stature,” wrote Paul Boesch in his autobiography Hey, Boy! Where’d You Get Them Ears? The massive wrestlers “were afraid to breathe too hard in his presence, lest Barnett should break apart at the seams.”

“He was an unforgettable figure, as much as anyone I ever met before,” wrote Jack Brisco in his self-titled autobiography, Brisco. “[He] was a flamboyant dresser, always wearing three-piece suits and his ever present horn-rimed glasses. He tried to portray someone who came from ‘old money.’ I have no idea if he did or not, but I do believe it was more of an act than reality. Jim looked like a character out of a Noel Coward play. He would always come up to me and say, ‘Jack, my boy, how are you today?’ When he had all the wrestlers together, he would say, ‘When I look at my boys, I see stars.’ He was quite a character.”

Dewey Robertson, who toured Australia for Barnett, doesn’t think Barnett was much of a wrestling fan, and was instead focused on making money. “He was very aloof of the wrestlers, on the one hand, but very connected in another way as an interest in making money with them.”

Barnett was also openly gay, which led to much rumor-mongering and bad-mouthing from those who said he pushed his favorite wrestlers. Plus, driven by his business sense, he would be called names like “conniving charlatan” (Ole Anderson) and worse.

Over the years, he’d work in, own a part of, and run a number of promotions and towns, including Louisville, Indianapolis, Florida, and most famously, in Atlanta with Georgia Championship Wrestling and Ted Turner’s set-to-expand Channel 17, aka WTBS. In fact, he gained a reputation of staying around just long enough to make a substantial piece of money before moving on.

It was in Indianapolis in 1955 where he made his fundamental impact on wrestling. Up until that point, the usual way of doing TV was to have a mobile studio at the weekly arena event, and broadcast just a little bit from a few select matches.

When a mobile studio was unavailable one day, he simply set up the ring at the TV studio. “It retrospect, like so many solutions, this was one so obvious that it seems almost impossible that it had not been tried before,” wrote Boesch. “The advantages were manifest when viewed from the standpoint of the solution. By showing television viewers wrestling that came from some place other than the arena where he sold tickets, the promoter could entice the sit-at-home fans to join the line at the box office.”

In 1964, Barnett went to Australia on the advice of Johnny Doyle, and together they decided to start promoting in the virgin territory. After Doyle’s death in 1969, Barnett promoted five more years. [See Jim Barnett’s Australian legacy.]

Barnett’s other major contribution happened with TV as well. Firmly established as the promoter in Atlanta, and with a key slot on Channel 17, Barnett became a key ally of station owner Ted Turner, who had visions of bigger things. As Turner’s station morphed into WTBS, the first nationwide ‘superstation’, Barnett realized the power his Georgia Championship Wrestling show had.

“Atlanta, Georgia was the first professional wrestling operation that was on national TV, since 1955, when the Dumont network went out of business,” Ole Anderson, a booker for Georgia, told SLAM! Wrestling. “So of course, with more people watching national television in 1976 than there was in 1955, because the population was greater. So it was the biggest damn television in the whole piss-ass world. The people that we had, that I had, that I booked in Atlanta, name ’em. Name whomever you want to name. You’d probably be hard-pressed to find somebody who wasn’t on Atlanta TV.”

Thanks to the reach of TBS, during the 1970s, Barnett was one of the most powerful promoters in the NWA.

“A lot of people don’t like him, but you can quote me on this. As far as I’m concerned, Jim Barnett was good to work for and paid good money,” said the late Tom Renesto in a Whatever Happened to … ? interview in October 1998. “When I went to work for him after Mrs. Gunkel got out, he gave me a thousand dollars a week. As long as you made him money, he paid you right.”

“Jim Barnett was a good pay-off man until he got with those crooks down south like the Fullers, and those bums from Tennessee,” said the ever-opinionated Don Jardine in Canadian Championship Wrestling.

As the WWF started to expand in the early ’80s, Barnett found himself in yet another company. “From 1983 to 1987 I was Senior Vice President,” Barnett told SLAM! Wrestling in April 2001. “I was real important in the early years of the World Wrestling Federation.”

In 1987, he returned south to work for Jim Crockett Promotions, and stayed there on a consulting basis until the company was swallowed up by the WWF. It was at that point that SLAM! Wrestling talked with Barnett. “I’m just on leave from World Championship Wrestling, which just shut down … they gave everybody so many weeks, so I still am working for them, but not,” he said. “So I really don’t know what I’m going to do. I’m going to be 77 in June and I’ve always worked, so I don’t know what it’ll happen.”

For the last couple of years at WCW, he was a talent scout, scouring the indy scene for the next big name for the company. He claimed to have known about two weeks before the deal was announced that Vince McMahon was going to buy WCW. “That surprised me, but he only bought the intellectual properties. He didn’t buy the contracts. But I was surprised. It was something that Vince always wanted to own and he wound up owning it. I think it’s terrific.”

According to Dave Meltzer of the Wrestling Observer, Barnett had been battling cancer, and suffered a broken arm in a fall, necessitating surgery. He never recovered fully from the surgery, contracted pneumonia and died Friday.

According to the obituary in the Atlanta Journal-Constitution, Barnett’s body was cremated. Memorial service plans will be announced by Cremation Society of the South.