Smackdown okay at the Corral 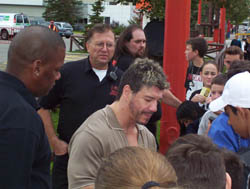 The empty seats throughout the Stampede Corral, which at capacity holds a mere 6500 people said all that needs to be said. The Smackdown brand isn’t a draw. The WWE has failed to make fans care about that roster, and thus they weren’t willing to plunk down between $20 and $50 to see stars like Heindenreich, Scotty Too Hotty and The FBI.

This isn’t a fault in the talent, who actually put on a good, but not spectacular show. However the company didn’t publicize the intended card until days ago, and most of the ‘top tier’ talent such as Undertaker, Dudley Boyz, John Cena and Booker T where not on the show. Simply put, Rey Mysterio, Kurt Angle, RVD and Eddie Guerrero, as popular as they are, aren’t enough to put fans in the seats.

The main event triple threat between WWE Champion John ‘Bradshaw’ Layfield, Eddie Guerrero and Kurt Angle however was worth the price of admission and a pay per view quality match. Fans knew they were in for a unique match when Guerrero entered in a lowrider and JBL traveled in his trademark limo. Not to be outdone, Angle rode to the ring seated atop a miniature clown type car, eliciting a laugh. The match itself saw all of the trademark moves as well as a amusing segment where Guerrero showed Angle how to cheat, stomping on JBL’s fingers, poking him in the eyes and punching him five times in the corner. Angle played follow the leader and did the same, then did the Guerrero dance before taking him down. Seemingly having the match and title won by snaring Guerrero in the ankle lock, Angle was easy prey for a clothesline from hell to lose the match.

Another surprisingly good match was the tag title tilt between makeshift tag champions Kenzo Suzuki and Rene Dupre and the makeshift challengers of Rob Van Dam and Bob Holly. An intricate series of reversals and missed moves between RVD and Dupree got a loud ovation. As Holly took control of the champions he set Suzuki up for the Alabama Slam but Kenzo’s valet Hiroko blinded him with salt, resulting in leaving Calgary without the gold.

Neither did Rey Mysterio, whose fast paced exciting bout with cruiserweight champion Spike Dudley also thrilled the crowd. Despite Dudley cheating to retain the title Rey got some satisfaction by hitting the 619.

The rest of the show unfortunately amounted to filler. Billy Kidman turned heel, insulting the fans and saying they wanted him to hurt someone else, like he did to Chavo with the Shooting Star Press. He called out partner Paul London and told him he was a terrible partner and slapped him. Smackdown GM hit ringside and made a match that had never been seen before on TV, PPV, or in any arena’. Except the previous nights show in Edmonton. The match between Kidman and London was exciting but far too short.

Post show, those going to the Hillary Duff concert next door at the Saddledome stared curiously at fans gathered outside in hopes of meeting some of their favorites. Their patience paid off as Johnny ‘The Bull’ Stamboli, Rey Mysterio, Kenzo Suzuki and Eddie Guerrero all stopped to sign autographs and take pictures. You could tell that it meant a lot to the fans to have these wrestlers take the time to talk to them. The person behind the persona was revealed when one fan told Stamboli he was his hero and he replied “I’m not a hero. A teacher or a solider, those should be your heroes.”

WWE at the Stampede Corral Results.