Dr. Wagner, one of the legends of lucha libre, died Sunday from a heart attack at his home in Torreon, Mexico. He was 68. His contribution to Mexico’s wrestling genre is deep and rich, and continues on with his sons Dr. Wagner Jr. and Black Tiger.

Manuel González Rivera debuted July 16, 1961 in Guadalajara, Jalisco. The evil masked doctor gimmick had been established as a part of the culture in the 1950s by El Medico Aseino, who would also portray a technico during his career. The initial idea was for a medical tag team, but Aseino’s death in 1960 ended that possibility. 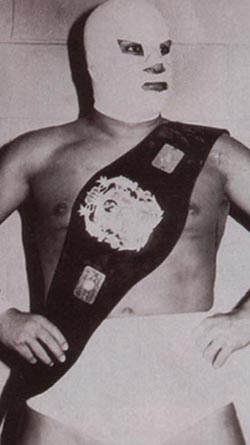 In any case, Dr. Wagner outshadowed the career of Medico Aseino during his 25-year career, wrote Dr. Acid in From Parts Unknown. “Wagner’s take-no-prisoners approach coupled with his great mat technique made him a star.”

Dr. Wagner Jr., in the same issue of From Parts Unknown, explained where his father got the name. “Well at first there was Medico Asesino. He was looking for a partner, and the promoter wanted something to do with the medical profession-a doctor or medic. He didn’t want to use just ‘medical’ or ‘doctor’ alone. He needed a name to complement doctor-Dr. ‘X.’ He was reading a book about the composer Wagner, so he put the names together: Doctor Wagner.”

“Lucha Libre has lost one its true legends in Dr. Wagner,” said John Molinaro, author of The Top 100 Pro Wrestlers of All Time and former publisher of the Huricanrana! newsletter. “He was one the top heels in Mexico during the 60s and 70s and he paved the way for the wrestlers that followed in his footsteps that used the ‘evil doctor’ gimmick that he perfected. He was a very solid worker, both as a singles wrestler and in a tag team with Angel Blanco, which many people say was one of the best tag team in Mexican wrestling.”

As a part of La Ole Blanc (The White Wave) with the similarly medically-garbed Angel Blanco, Dr. Wagner rose to further fame. The duo are considered among the greatest tag teams in Mexican wrestling history, and often teamed with Gran Markus to make a trio.

Larry Zbyszko worked against Dr. Wagner in February 1976, during a Jim Crockett-promoted tour of Guatemala. White mask and white tights, and his name was Dr. Wagner,” recalled Zbyszko. “I remember the match vaguely. It was good match. He was a good wrestler. It wasn’t like, in those days, the luchadores flying around off the ropes, it was a wrestling match.” (What Zbyszko remembers more is on February 4, 1976, the day the wrestlers flew out, an earthquake devastated Guatemala City, killing more than 22,000 people.)

In 1986, he was in a car accident that crippled him, and killed Angel Blanco. He eventually learned to walk with a cane, but never wrestled again.

Dr. Wagner’s legacy is continued on by his sons Dr. Wagner Jr. and Black Tiger–who is sometimes known as Silver King.

“I am satisfied so that I have my children, I have many friends, people who remember me,” Dr. Wagner told Roberto de J Figueroa Salazar in October 2003 in an interview at www.lomejordelalucha.com. “Silver King was born being a fighter,” he said, adding that Dr. Wagner Jr. had a tougher go of it.

Silver King is the older sibling, but didn’t take his father’s name. “My brother was intimidated by the legend,” explained Wagner Jr. in his From Parts Unknown interview. “My father was a big star and Silver didn’t want that pressure on his back. He wanted to go his own way. For me, it is a challenge and an adventure to maintain and advance the name of my father.”

The symbol on the side of both Dr. Wagner and Dr. Wagner Jr.’s masks represents Los Caballeros Aguillas, the Knights of the Eagle, a tribute to ancient Mexican warriors who wore helmets shaped like eagle heads, with their faces coming out of the beak.

Wagner is survived by his wife Magdalena and his children Oscar, Mayra, Juan Manuel and Cesar. His funeral will be held at Avenida Allende y Niños Héroes in Torreon.