Hall of Fame grows some more

SCHENECTADY, NY – The feeling around the third annual Pro Wrestling Hall of Fame induction ceremony on Saturday night was most definitely one of growth, that something truly magical is starting to build and build as the roster of inductees swells. 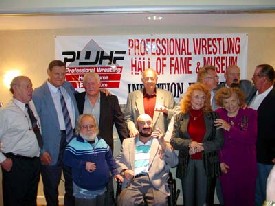 The Hall of Fame members in attendance. — photo by Steven Johnson

Again and again, the wrestlers being honoured got up and talked with heartfelt appreciation for the dedication of the PWHOF people and the beginnings of a solid foundation for the long-term preservation of professional wrestling history.

Hall of Fame founder and president Tony Vellano was singled-out by numerous wrestlers, and was given a Mohawk name (in English, it’s He Who Assembles The Boys) by Billy Two Rivers. Vellano was humble but confident on the stage. “The applause is for all of us because we’re becoming one group to keep this alive,” he said.

Master of Ceremonies George ‘The Animal’ Steele echoed Vellano’s statement as he assessed the crowd of 300, made up of wrestlers and their families, supporters of the Hall of Fame and wrestling fans. “Right now, we’re all becoming one team,” he said.

“You people see what’s going on here? It started out as a Tony Vellano idea and it’s becoming a movement. The generosity is right there. We saw it again tonight,” said Davey O’Hannon, the former wrestler who introduced 2004 inductee Terry Funk. “My peers in the business and the fans that support us, spread the word. It’s going to get bigger and bigger and bigger. You know why? Because it’s filled with integrity, and it’s filled with honesty, and it’s filled with decency, and that’s the people you see here tonight. And it’s never going away. How can you not be a fan of professional wrestling? I spent a little over 20 years as an active wrestler, and I’m excited to be here tonight with the people being honoured.”

While everyone at the fundraising dinner was supportive of the Hall of Fame, which is about to move to a new, bigger location within Schenectady, it was for the inductees that people came.

Former NWA world champions Terry Funk and Harley Race were not only the last two of this year’s inductees, they were also among the most moving, and well-spoken speakers.

“I grew up on wrestling,” Funk said. “I just absolutely love it. A lot of kids wanted to play cowboys and indians. I never thought much about that. I never thought much about ever using my brain on anything other than wrestling, because I just loved it. I just loved being a part of it. It’s a great thing. It’s a great hook. I’ve been able to do it all of this time. It’s just a wonderful thing that you share with your counterpart, your opponent in the ring. You get in the ring with him, and it’s wonderful to go out there and capture the fans, to capture the people. It’s just a great doggone feeling. It’s just something I’ve loved doing all of my life. I’d like to do it for another gazillion years.”

Former AWA champion Nick Bockwinkel, having already introduced his old foe Verne Gagne into the Hall of Fame, paid homage to Race, Funk and other NWA World champs and their amazing schedules. Bockwinkel figured that he wrestled any where from 150 to 200 matches a year, meaning roughly that he only worked about half a year. The lesser schedules mean that both he and Gagne can still move around well. The NWA World champs could work upwards of 400 matches a year, if TV spots and double shots were included. “When Harley Race and Terry Funk walk up, you’re going to understand why. They wrestled that many times a year, and they probably spent, I don’t know how many hour matches in a row. Every night of the week, they may have wrestled a match that went one hour. Now the only reason I bring this up is that myself, Mr. Gagne, we kind of had a soft, cushy trip compared to these guys, and I want them to know, gentlemen, I salute you,” Bockwinkel said.

Upon taking the stage, Harley Race paid tribute to Killer Kowalski, who was in the audience and a previous inductee. “Mr. Kowalski came to Minnesota in the ’60s, and he turned Minnesota around. This guy could do UNBELIEVABLE stuff, that he was doing in the ’60s. [I was] reminded of one of them today. You think back to people like Walter, Verne, the Vachons, Terry, and the room is full of them. Greatness that was around decade after decade after decade,” ‘Handsome’ Harley said, leading the crowd in a standing ovation for the workers in the room. If Kowalski were in the WWE right now, Race believes, “the ratings wouldn’t be where they are, they would be through the goddamn roof.”

“I’ve had one of the most interesting lives of any human being on the face of the Earth. I’ve been able to do exactly what I love to do my whole entire life,” Race said. “I started on Gust Karras’ carnivals when I was 14 years old. I went from that to one of the greatest businesses on the face of God’s green Earth, and it’s called pro wrestling. I sat back there all evening long as each one of these people came up here, and I was thinking to myself, ‘What in God’s name keeps a group of individuals like us in a business where you beat yourself totally apart, day after day after day after day?’ There’s only one thing — because we damn well loved what we did, and what we’re doing right today. This group here that assembled this Hall of Fame has done something that will last an eternity. There’s nothing once we walk out these doors that can take this away from us. There’s nothing!”

The evening started off with the posthumous induction of William Muldoon in the Pioneer Era division, Gordon Solie and Vincent McMahon, Sr. in the non-participant category, Fred Blassie into the Television Era section and Dr. John Bonica, a former wrestler and world famous anesthesiologist, was given the New York State Award.

After dinner, The Destroyer (Dick Beyer), who was last year’s New York State Award winner (along with the late Ilio DiPaolo), introduced this year’s living award winner, Len Rossi (Len Rositano). Rossi, who was from Utica, NY originally, talked about starting his career in 1950, and how great it was to see some faces he hadn’t seen in a long time, like Verne Gagne, who he established he hadn’t seen in 49 years. “I’m still a fan of all of you,” said Rossi, whose son Joey got into wrestling as well.

The 93-year-old Angelo Savoldi was inducted into the Pioneer Era of the Hall, but was unable to attend.

Ida May Martinez introduced Lord Roger Littlebrook (Eric Tovey) into the Midget Category. “How’d he get the name Lord?” she asked with a laugh. “We all know he’s a devil!” Martinez carefully avoided using the term ‘midget’ lest she offend, but during a brief awkward moment, Steele yelled, “he’s a midget”, breaking up the crowd. Littlebrook, who has had some health difficulties of late, was quick to say his piece on the podium. “I didn’t ever think I’d get this far,” he said. Steele, who spent a lot of time with the midgets in Detroit over the years (which is where Jack Britton booked the midgets out of) said that the smaller grapplers were always “very large in the wrestlers’ hearts.”

When introducing his longtime adversary and employer Verne Gagne into the TV era category, Bockwinkel had a hard time wiping the smile from his face. “I get to talk uninterrupted about Verne Gagne,” he joked. According to Bockwinkel, Gagne set a “hell of a standard” for him to follow, and always gave 110% in the ring. “I knew how to tweak his ego to get him up to 120%,” Bockwinkel said.

The 78-year-old Gagne took the stage, and verified that it was indeed strange to have Bockwinkel praise him. “It’s so unlike you to send plaudits at me!” It was equally strange to find himself at a table with his most feared opponent. “I never thought I’d find myself sitting between the Vachon brothers!”

As for The Great Johnny Mae Young, who else could induct her into the Ladies Category but The Fabulous Moolah? “If it hadn’t been for her, I probably wouldn’t have been in the business,” said Moolah, before a video of Young in action as a youthful woman in action screened, set appropriately to Pat Benatar’s “Hit Me With Your Best Shot.”

After accepting the induction ring and plaque, Young talked about just having signed a new deal with the WWE and her scheduled appearance with Moolah Sunday night in Columbia, SC. Then in an instant, she flipped back 60 years, and recalled a bout in Minnesota in 1939 with Nagurski as the referee where she flipped him over during the match, making the newspapers. “It touches me that you think enough of me to put me in the Pro Wrestling Hall of Fame,” she said. “This will be the greatest memory of my life.”

Steele had the duty of bringing up Mad Dog and Butcher Vachon for their induction into the Tag Team Category. “I can’t imagine the household of the Vachons,” he said.

Butcher Vachon got the chance to speak first (one of the rare times, he said) and thanked his brother for bringing him into pro wrestling. “With my brother, you didn’t have to be all that talented, but you did have to keep up,” he said. After Mad Dog’s speech, Paul Vachon sang as well, his voice somewhat suffering from months of radiation treatment to fight throat cancer.

“I believe that the reason that I’m here today is that I met so many wonderful, unbelievable people,” said Mad Dog Vachon, recalling an auto accident in 1954 in Texas. “I went to Houston, Texas. My son Mike was two weeks old. I just bought my first car. I couldn’t drive it. My first wife Dorothy drove the car. I wrestled in Fort Worth Monday, Tuesday in Dallas, Wednesday San Antonio, Thursday Corpus Christi. The next day was Friday. Houston was closed. Morris Siegel never promoted around Christmas or New Year’s week. But at 10 o’clock in the morning, coming back from Corpus Christi, the day before Christmas, a beautiful, sunny day, a drunken person hit our car and sent my first wife Dorothy to the hospital. I survived that. There was a man and his wife there from Houston. They were going to Brownsville. They just came 200 miles. My wife was in the hospital. We left with the ambulance. They picked me up, my daughter was two years old, my son was two weeks old, and took all of my luggage. We had a gallon of syrup because my son was allergic to milk, we had to give him kaero milk from a can with water and syrup. It broke all over my suitcases. This man and his wife picked up all of my clothing, all my suitcases, went around back to Houston, went 400 miles out of his way. A good Samaritan to this day, and to this day, I never knew his name,” Vachon said.

Among the other wrestlers and promoters in attendance were Gloria Bertinili, Ray Apollo (Doink), Dominic DeNucci, Dewey Robertson (The Missing Link), Al Mandell, Karl Lauer, Ox Baker, and a host of wrestlers who worked the independent show in Schenectady Friday night.

The Pro Wrestling Hall of Fame also got two substantial donations during the dinner, and announced plans for two other fundraisers: The Buffalo Bisons AAA baseball game on July 17th and subsequent wrestling show will be a money raiser for the Hall of Fame, and on September 18, there will be a wrestling show and banquet dinner in Toronto.

For more on the Hall of Fame, be sure to check out www.pwhf.org.