The “Red Bull” Nick Berk has been entertaining wrestling fans on the East Coast U.S. Indy circuit for so long, that it’s often forgotten he’s still a young gentleman of 24. A mainstay at Combat Zone Wrestling (CZW), the Philadelphia-based wrestler is now in his eighth year as a professional mat man. He’s one of a small percentage that has endured in the oftentimes brutal business, while thousands have debuted and quickly departed. Yet, the notion of being perceived as a veteran is one he still finds a little tricky.

“I’m veteran to some people, and then to some people I’m not,” he told SLAM! Wrestling. “It depends on who you compare me to whether or not I am a veteran. I haven’t been to WWE yet, I wasn’t in WCW, and I haven’t been to [NWA] TNA yet, so as far as that level goes, I’m not a veteran. But, as far as experience wise, I’m still learning, but I have learned a great deal and a lot more than now the majority of the people in the business.” 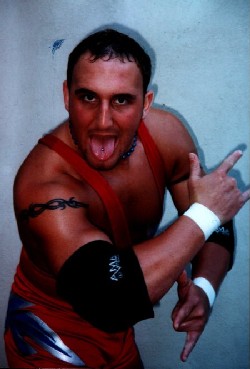 Throughout his years in the business Berk has developed an unique, innovative style, which is a hybrid form of technical, submission, and high-flying wrestling. He describes it as the “renegade version of the new old school.”

“It’s a combination of a lot of different things,” Berk said. “I can do everything. I’ve done the brawling, I’ve done the hardcore, I’ve done the technical, I’ve done the submission, I’ve done it all. And with my style, it’s really hard to distinguish it to one type of description, because I actually do change with every person I wrestle because every person is different, so I change my style to blend with them, or to set them off – to offset them and maybe teach them something different during our match. So my style is actually maybe an innovative learning experience so to speak.”

Berk has regularly showcased his innovative wrestling skills on CZW shows since debuting with the company in August 1999. The company, headed by John Zandig, is one of the more popular, albeit controversial promotions (because of its “ultraviolent” tag) on the U.S. wrestling scene.

“It’s been a roller coaster,” Berk said of his time working for the company. “I love being there, sometimes I hate being there, but that goes with almost any job out there, and that goes with any situation in life. There’s always ups and downs, and there’s always other people that have to be put before you, and everybody has their time to shine, and maybe my full time hasn’t come to shine yet, maybe it already has, I don’t know. But I definitely love it there.”

The 5-foot-10 grappler describes the locker room at CZW as family-like, and believes that particular structure is responsible for the longevity of the company.

“The people here I think of as my family, whether they’re here for one show or here for all the shows,” he explained. “I definitely love every person that I’ve gotten to work with here. Everybody fights with each other here, and then we make up, you know. That’s the good part about this company.

“So if my idea is different to somebody else’s, of course we’re gonna butt heads, but to be able to come out at the end with a cool head is actually overcoming the evils that might lurk in the business and be able to go ahead with a strong company, which I think CZW definitely has a strong company feel to it.”

Berk has seen his time with the company as a major “growing experience,” an experience which has seen him hold the CZW Heavyweight and Ironman straps, and wrestle the likes of Adam Flash, Tajiri, Tony Mamaluke, and Nunzio. He has also ventured to Japan and Italy with the promotion. On the Italy show, this past March, he worked a three-way dance with Sonjay Dutt and Jimmy Rave. It was reportedly an enthralling, action-packed match, and Berk rates it as one of his finest performances.

“I’d wrestled them both before at different times in one on one action, but there it was a three-way and there was a whole different meaning to it because it was Italy and everything, so we really had to step it up a little bit,” he explained. “They’re both awesome wrestlers, and the way that we all meshed together and everything with our styles, it was very entertaining and very competitive. It was one of my best matches in the past year definitely, one of my top matches.”

He enjoyed everything about the tour, especially the crowd, which was energetic and supportive of all the workers.

“Italy was just a great experience all together,” he said. “The crowd was lovely. There’s no better feeling than being in a different country, thousands of miles away from your home, and hearing hundreds of people, maybe even thousands of people, from what the attendance was, just chanting your name in the Italian accent and what not. That was really cool.”

The show left a positive lasting feeling, a feeling of satisfaction that he made the choice to be a full-time professional wrestler.

“They (the fans) were all those miles away, and they knew my style and they appreciated me, and that makes every day I work out in the gym, every day that I go to training, and every bad day that I had in the wrestling business, it makes it all worthwhile.”

Berk has done reasonably well for himself from wrestling, although he admits it’s a little more difficult earning a living than it was a couple years ago. He provided an intriguing case scenario.

“Now there’s so many other wrestlers out there that can go out there and wrestle for Joe Schmo independent pro wrestling, and they can charge half of what I charge,” he explained. “So the Joe Schmo promoter will bring in that wrestler that can wrestle half as good as me, and they’ll pay them maybe less than half of what I charge, so that kinda takes money out of my pocket.”

While he still brings in something that resembles a living, he is by no stretch of the imagination living lavishly.

“My bills are getting paid and everything, but I’m not living in the mansion and I’m not eating a 10-course meal everyday. I mean, I do have a brand new car, and I’m driving a motorcycle, and I have a pretty nice house and all, but, you know, I’m living month to month and if by chance I might need to go and get another job or something, I guess I’ll have to swallow my pride and go do it.”

“I wake up, eat eggs in the morning with wheat toast, and a protein shake,” Berk revealed. “Then I watch some TV, I have another protein shake, and I get ready for the gym. After 20 minutes or half an hour, if the weather’s okay, I take a bike ride to the gym because the gym is only about 10 minutes away from my house, so that’s a little bit of cardio right there. I’ll workout for about an hour and a half on different body parts. I’ll do one body part a day, or sometimes I’ll combine them. My workout always changes from week to week because that’s actually how you get your body to grow.

“Then, when I’m done working out, I’ll do some cardio on the cardio machines, or I’ll run or something like that. Then I’ll ride my bike home, or drive home, and have another protein shake and eat two hours later. Every two hours I’m either having a protein shake, or eating chicken and broccoli, or chicken in salad, or eggs and something. A couple days I’ll go to the [CZW] wrestling gym and work with some of the students too. So that’s my entire life, that’s every day, in and out. Then on the weekends I’m travelling to shows.”

Berk rarely strays from his eating regime, and the few exceptions are when family or friends make plans for him.

“They like to tell me I’m gonna go and eat my mum’s meal on such and such a day, or I have to go and hang out with my friends on this day and eat their meal,” he explained. “So it seems that one day is that day I stray with the one meal.”

When he does stray with the meal, he goes “all out.”

“A lot of people say you’re not supposed to do that, but I do because I love the fatty foods, I can’t get enough of it, I gave it all up and it’s so hard, so that one meal to have a whole bunch of pasta, or eat pizza, or something like that. I can do it because I’ve just spent the last six days working really hard and staying away from it.”

His hometown of Philadelphia, Pennsylvania possesses some of the crudest, most demanding wrestling fans on the planet. Critics of the infamous “Philly” crowds say they’ve been spoiled, due to the over-saturation of wrestling in the area, whereas the enthusiasts would argue they keep the wrestlers on their toes, and ensure the in-ring product doesn’t get stale.

“Sometimes I do everything short of shooting myself and I can’t get them to actually care,” Berk said of the typical Philly audience. “But when they do care, and they do show appreciation, it is great, because I mean, you know that when they actually cheer for you, or they ‘pop’ for a certain ‘spot’ or move, then you’ve done something great.”

Although he admits they make his job tough, he enjoys the challenge of working in front of them.”

“They are the hardest fans to really impress, but it’s a challenge and that’s why I got into wrestling, and so if I can make them happy then I guess I can go on to the WWE and TNA, and anywhere else, and make them happy with me too.”

Berk’s motivation in the business stems from watching those associated with the WWE in action because they are living his dream.

“Every time I watch them, that’s my motivation,” he said. “To see them in the great shape that they’re in, to see them being able to wrestle the four, five matches a week that they wrestle. It motivates me to be able to continue on and strive for that goal to be there.”

When asked about the future, Berk is quick to point out he’s no psychic, although even without a crystal ball, he feels the future will hold great things. He draws on a conversation with WWE Road Agent Tom Pritchard to present his outlook.

“A big thing that Tom Pritchard told me from WWE, he said, you know, ‘You’re gonna be told no hundreds times before you’re told yes and when you’re told that yes it’s gonna make all those no’s forgotten,'” Berk said.

“So the future holds many no’s and at least one yes. So that’s the only thing I can actually say for my future, because I know it will hold a yes.”